I've been on a sandwich kick recently...

It's been quite a while since I ate a real sandwich with real bread, and no, I haven't jumped back on the bread bandwagon. Other than grains making me feel bloated and hungry all the time, my main reason to continue the Paleo lifestyle has been skin sensitivity. Various skin maladies I'd accepted as normal have pretty much vanished. We're talking really gross flaky ear and eyelid eczema. Breaking out like a teenager with too much stress...Sexy eh!

Anyway, when going sans wheat and grains, you get to a point where every meal requires a fork or other eating utensil and what I missed about sandwiches and burritos was the hands-only convenience. Especially when I seem to be in the car driving from one clinic to another for work during lunch times. I made coconut flour tortillas once, and I've seen a recipe for a flaxseed tortilla, but I think they'd get crumbly and fall apart if you stuff them too much or put in juicy sandwichy condiments inside. There've been lots of attempts at Paleo pizza crust (meh) and muffins (YUM!), but nothing promising enough to want to try making bread. And I don't miss sandwich bread that much anyway--it's more the wraps and burritos.

When I was at home in January, we had another family gorge-fest at a Chinese restaurant and I realized DUH...lettuce wraps! What low-carb Atkinsers have been doing for ages! I was really only looking for iceberg lettuce (the crappy crappy lettuce that is really gross and I never eat in salads) but luckily I was at our local international indoor farmer's market (a short walk from the office) on Tuesday after work, and they did not actually have iceberg lettuce. They had like 10 different kinds of cabbage though. I found the perfect cabbage! The sign said "Flat Cabbage." My only hesitation was how ginormous it was. 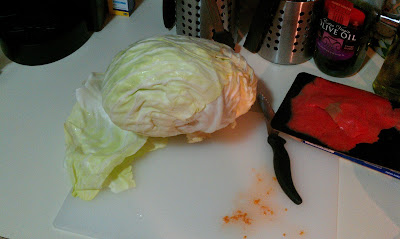 But ginormous cabbage leaf ended up being perfect for using as a faux tortilla. It also ends up being like a full serving of cabbage! 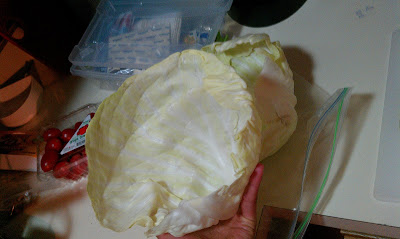 I stuffed it with everything delicious that could go in a sandwich: turkey breast, sliced tomatoes, seaweed salad, smoked salmon...oh yeah, and bacon bits. 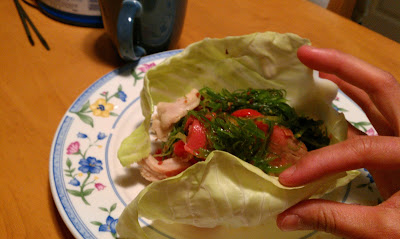 It ended up being awesome and perfect and delicious! Oh how I've missed sandwiches! 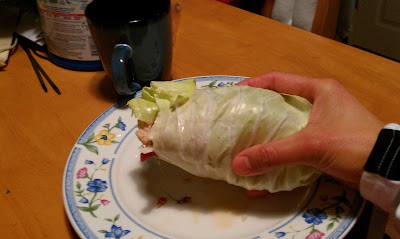 I was so hungry that I had to take a few bites before I took a photo.

Next I made one with turkey breast, ranch and bacon bits. HEHE. Ok, ranch dressing isn't Paleo (unless you make your own damn dressing) but grain-free is the priority. Then I thought of my college favorite sandwich at Quizno's--it was the turkey/bacon/guac. Guacamole!!! (yes, the first image was a spoiler, wasn't it.)

The next day (yesterday dinner) I made a sandwich with roast beef and guacamole. and bacon bits. I had one at lunch today too. I even wrapped it in foil like a burrito, and tested it out, eating it while driving. It passed the test! 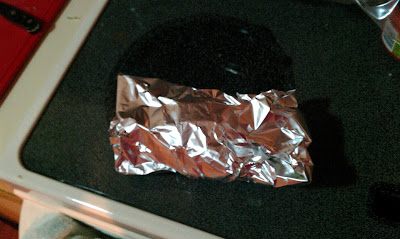 There may have been smoked salmon too. For dinner tonight, I had one with shrimps and seaweed salad. I am super excited for the next time we go to Chipotle so I can throw my no-rice-no-beans-no-tortilla fajita steak bowl into a cabbage wrap!

I may or may not have had a cabbage wrap sandwich for every lunch and dinner since coming up this obvious (but still brilliant!) idea. Delicious! and the ginormous cabbage head is probably good for like 30 sandwiches. for seriously.
Posted by Jocelyn Wong Neill at 9:55 PM