Ode to My MoCo Eagles, a North Face relay report 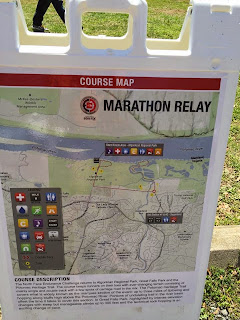 So this isn't really a "race report" as I don't think any of us considered it a real race. I personally have a bad track record in staying upright during trail races (#klutz) so I try not to go too fast or I trip over myself. In the week leading up to the race, Chris mentioned something about a bum foot, and the day before supercouple Team Lim mentioned that Kerry had been really sick, and Steve had 3/4 of an ankle (what does that even mean?!).

To me and Kevin, this event was like an RWB DC "family reunion" as it was the first time we went back to visit DC since moving back to Delaware 2 months ago. We both got much more involved with the DC chapter once the Montgomery County (MoCo!) sub-chapter/community got more organized in October 2013. (RWB was unavoidable as the Wednesday night runs were based out of the Lululemon just 2 blocks down the street from our first studio.)

Aside from several runs I skipped during the butt-cold freezing weeks of winter, Wednesday night runs were a staple with my crew, and we even shared pretty big milestones together (literally and figuratively!). These were the first ladies who heard the news when Kevin proposed (with wedding planning discussed during runs). Kerry ran each week until 2 weeks before she popped out Steve Junior, and we threw a post-run baby shower for Steve and Kerry (she broke the news to me during a run, of course). Chris made it through his first 10-miler, and then his second! Like all amazing running groups and running buddies, we were always there to tell each other about jobs, dating, family...first. Of course they were not happy when we broke the news about moving away, but wished us well and helped us pack up and celebrate new opportunities! 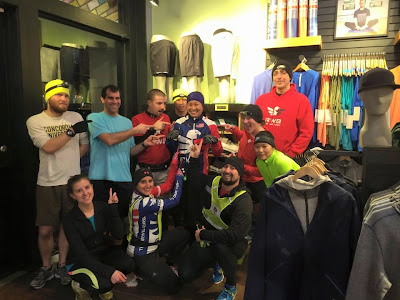 The night before the relay, we were hosted by our friends across the river, Justin and Keri in Alexandria (more Eagle love!), who sent us on our way Saturday morning after feeding us bacon and egg sandwiches (breakfast of champions!). We soon got to the park where we linked up with the rest of "Team RWB MoCo Eagles". Because of the various illness and ailments, Kerry nicknamed us "Team Sh*tshow", while I thought of us as the "MoCo MoFos"). Our decided order was that Kerry go first (she was sick and on a very specific breast-pumping schedule), I'd go second, Steve would go 3rd, and Chris would be our anchor (in case his foot wasn't cooperating, he didn't want the runner after him to wait too long).

Within 30 minutes of seeing how bad Kerry was feeling, I decided I would run the first leg with her--she insisted on running her 6.5 miles despite being sick, but was not very enthusiastic about the whole thing. I figured it would be helpful if I ran with her, like it was one of our Wednesday night runs! What was the purpose of a running relay reunion if we didn't get to chat and catch up while running? Obviously I hadn't been around for a couple months, and me and Kerry kept missing each other on alternating Wednesdays due to our moving craziness and their new baby schedule. I had also planned to get in at least a good 90 minutes of running, so I was more than happy to run both the first and second legs for a nice 13.1 miles. 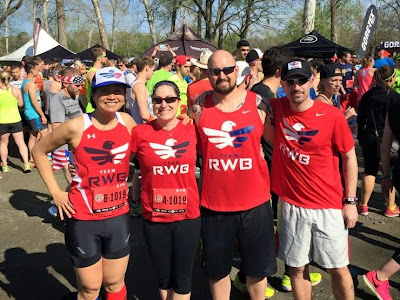 Well, off we went and while the weather was amazing and gorgeous (it would hit the mid-70's), patches of the trail were GROSS AND MUDDY! This was a travesty, as I was dumb enough to wear some fairly new shoes. Ugh...trail rookie. 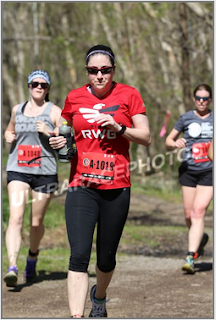 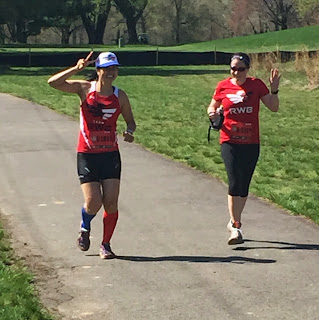 We went at a pretty good clip while chatting most of the way, I think we managed a sub-10 pace even with a small bit of walking, and me tripping over myself... Yeah, I got way too excited cheering for our fastest RWB relay team (they got 7th out of almost 100 teams!) coming the other way and fell into a bush. #klutz 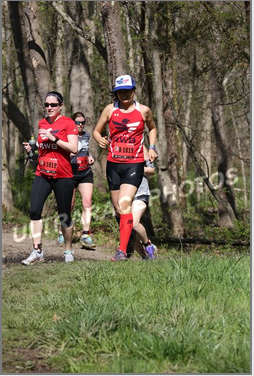 6.5 miles with Kerry went by quick, then it was time for the relay exchange! Kerry swapped the timing chip from her ankle to mine (she insisted that feeling up my leg would make her day), and off I went, squishing through the muddy areas again. 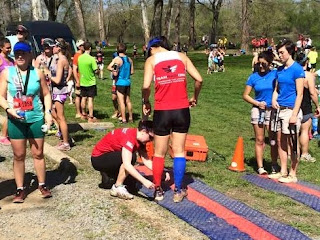 POOR SHOES! I felt amazing at first, which only lasted 2 miles, then I thought "crap, why didnt I let Steve go second?!" 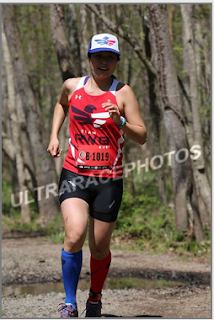 It was motivating as usual to have other RWB Eagles on the course, and I made it my goal to catch up to as many people as possible, including one of the girls we know, Katrine. I got her with a couple miles to spare and gave her the regular "caught-you-butt-spank" that everybody loves. (Just kidding, but wouldn't it be hilarious if you spanked everybody you passed?) 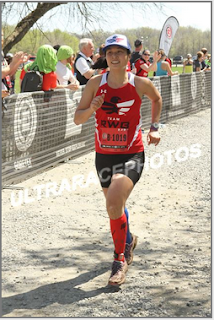 Then it was time to pass my chip over to Steve, and I realized this was my longest run in a while (I hadn't run a half marathon since Beach2Battleship in October), and managed a huge negative split with a 7:24 average (sub 1:52 for the 13 miles). Go Steve go! 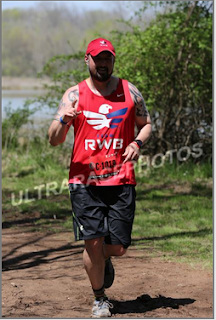 And it was off to the beer garden which was managed by Kevin and Adam, with RWB bartenders! 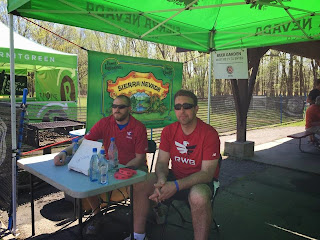 In between beers and eating, we got up to cheer for our final relay exchange, Steve passing to Chris, then back to the beer garden while Chris went out to get his shoes muddy. 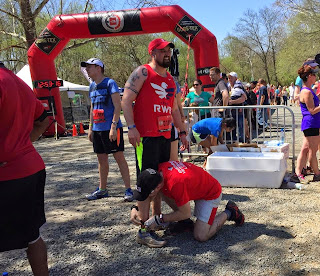 He had his phone and messaged our team at one point "Passing the aid station 2nd time. I'm hurting so slow and steady" and everyone insisted I run over to check on him. Steve: "Doing great Chris! Reinforcement inbound to you!" The joke was that I would end up having to run the entire marathon by myself since everybody was injured or ill. Ha! I yelled "I've only had 2 beers!" while struggling to put my muddy shoes back on, and only had to run about half a mile before I saw Chris on his way back, looking fairly strong. 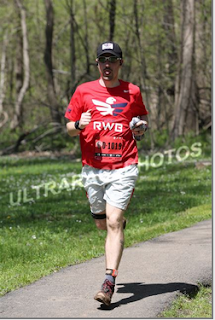 He even had enough for a finishing kick! I let him go that last 100 meters because he was too fast for me. :) 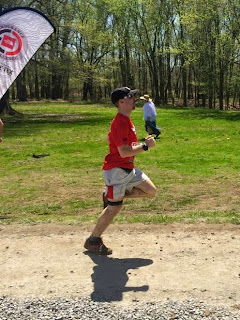 All in all, it was an awesome day filled with running, friends, mud, and beer. 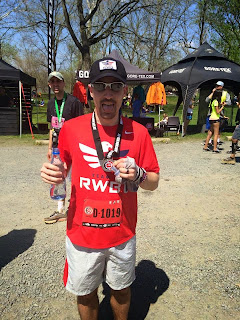 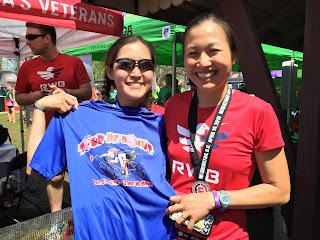 We got to see both Joanna (queen of the donuts) and Brennan (our fearless leader) finish the 50k race before we went back on the road to Delaware... 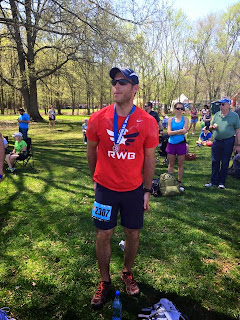 And of course, there was the requisite podium shots! 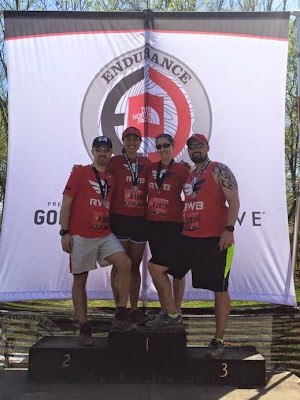 Thanks RWB family, let's do this again soon!
Posted by Jocelyn Wong Neill at 7:34 AM 1 comment: