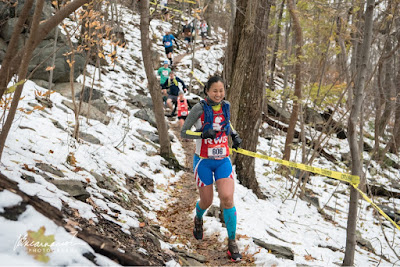 Last month was my second attempt at the JFK 50. I did it two years ago (race report here) with the stretch goal of breaking 8 hours and landing in the top 10 overall, but it was my first 50-miler ever. Some bad quad cramps and lack of nutrition caused me to sit down for almost 30 minutes wanting to cry. I ended up going 8:37 that year, and figured if I trained a little more, took in more nutrition, and didn't cramp or stop to cry, surely sub-8 could be mine!

This year, it was snowy and slushy, muddy and messy, thanks to 6 inches of snow on the Thursday before the Saturday race. Not just for the first 15 miles (the Appalachian Trail) but the following 26 miles of the crushed gravel towpath—so ...the first 41 miles. 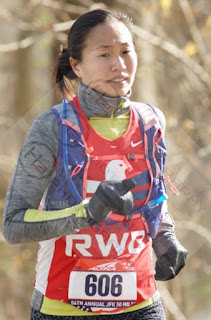 I went slower than I wanted the whole day, partially because of the conditions, partially because it was “that time of month” (TMI? Sorry-not-sorry), and mostly because I was burnt out from a big year of ultra training and racing. I hired a coach for the first time since my Ironman pro days, and started consistently training in December 2017, but did not foresee getting burnt out by September. There was a 6-week window from September to mid-October where I didn’t train very much until it was !!!panic time!!! with a month to go. Unfortunately those 6 weeks should have been critical training weeks! 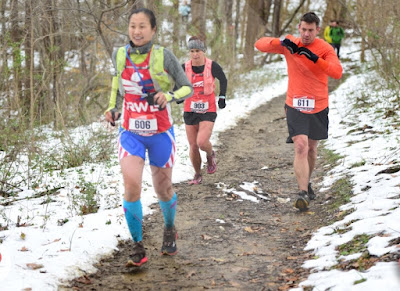 I didn’t hit any of my A, B, or C goals (which I did not adjust for the conditions or my decreased fitness) but still finished within 30 minutes of my 2016 time. It’s been a month since the race, and I was disgruntled for a little bit (there are earlier iterations of the race report that are pretty whiny and depressing), but I’m okay with it now. 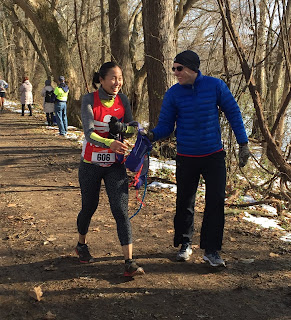 Other than my time and pace goals, I made a huge list of process goals and pretty much nailed all of them: no catastrophic falls, no going out too fast on the towpath (haha! I couldn’t if I wanted to!), keep a steady pace, have fun and smile lots. And no sitting down and crying for 30 minutes! 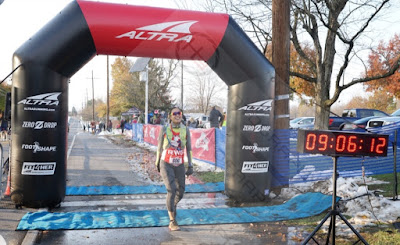 While I didn't have the finishing time that I wanted, I had the race that I trained for (i.e. didn't train enough for), and most importantly, I think I've finally found a worthy adversary in my search for a new physical challenge post-Ironman life. Something hard enough that it gets under your skin and makes you want to go back! But not so hard that you have to quit your day job. 😉 And it's a tough enough race that "just finishing" is always a major accomplishment. 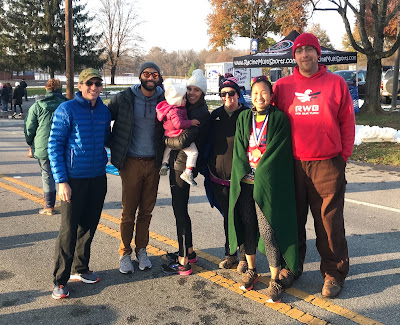 I also really enjoyed the team aspects of JFK this year. I ended up with an amazing crew: crew chief Ryan (we have now taken turns crew chief‘ing each other), the husband Kevin, and our friends from DC: Becci, Caitlin & Mo & Ivy (fun fact—Caitlin and Ivy were my crew in 2016, but Ivy was still in Caitlin’s belly at the time!). 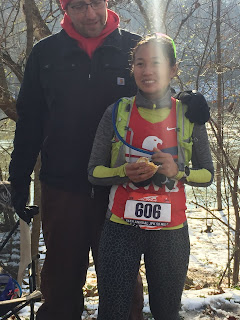 It was really helpful and uplifting to see them every 1.5 hours or so and I really needed them to help me with some unexpected wardrobe and shoe changes. I didn’t think I was going to change shoes (and socks) at all—and at one point I was running so slow, I couldn’t stay warm enough and requested my tights to go over my shorts. 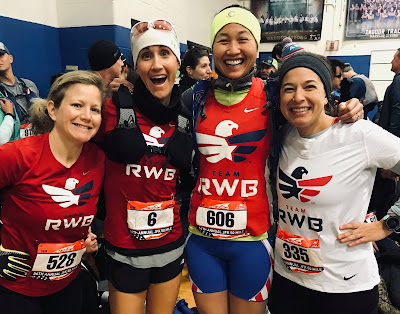 Speaking of team, my friend Maureen (“Mo”) from Team RWB tri camp was doing her first 50-miler and suggested we get a women’s team together to go after the women’s team title. JFK lets you race as both an individual and as a team, kind of like in cross country, except they tally the top 3 finishing times instead of finishing places. 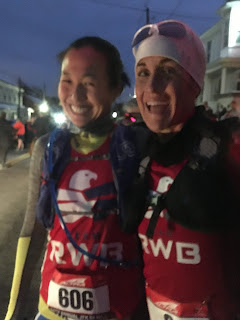 Mo recruited her high school friend Amanda, who would also be running her first 50, and I reached out to my former teamTBB teammate Kate. I had not seen her since we both raced Ironman Wisconsin in 2010 (she got 4th, I got 8th) after we did training camp in Thailand together. She has had 2 kids since then and lives and trains in NYC—she was my dark horse for the win and did not disappoint! 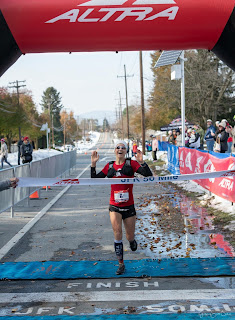 The Team RWB Badass Woman Eagles ended up taking the women’s team win, which was an incredible way to end the season. (Kate had to leave early back to NYC.) 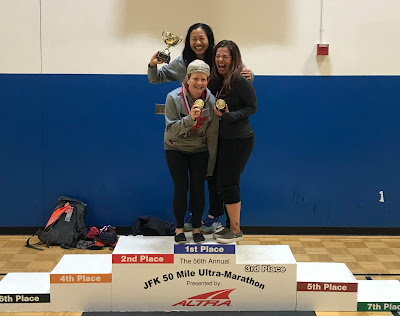 My friend Adam Popp also did his second JFK 50 and snagged a PR in these tougher conditions. We had previously met during the HAT 50k in 2017 when we learned we had many mutual friends through Walter Reed and Team RWB. (I’m still trying to figure out how to not come off as a creeper when coming across an amputee during a race.) 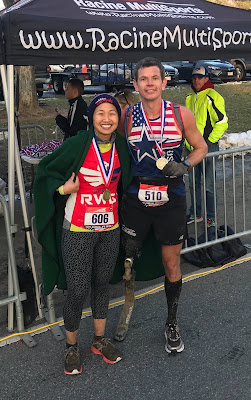 As the first above-knee amputee to run the race last year, he was also the guest speaker at the Legends’ Dinner the night before the race. It was great to hear his story but even better was that we were able to hassle each other about our training leading up to JFK (we haven’t raced the same event since HAT 2017). I was worried about how he would do on the AT section but once he got on the towpath, we both ran the same towpath split! He ran the final road section faster than I did and ended up finishing right behind me. 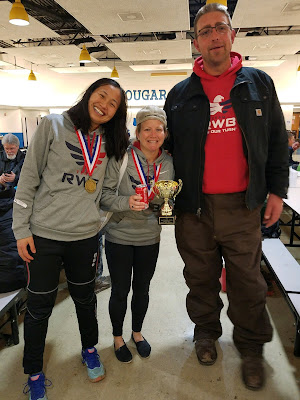 All-in-all, a very enjoyable weekend with great friends and of course November is always my favorite—JFK goes right into Thanksgiving and my birthday. It’s the best!

I am now enjoying my much-deserved off-season. I did learn lots from this race and more so the entire race season, and will do a 2018 recap soon...but don’t hold your breath!
Posted by Jocelyn Wong Neill at 10:56 PM No comments: