The Master Plan: Stage One, DONE! 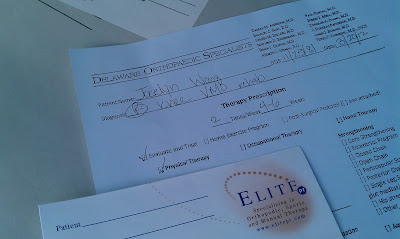 So. Hooray! I got clearance for starting physical therapy for my VMO quad tear. I saw Dr. Andrisani yesterday at Delaware Orthopedic Specialists (where I work at two half-days per week). This would actually be considered a second opinion, as I didn't feel comfortable going back to the trigger-happy PRP doc. (I felt as long as he could keep selling me $900 injections, he wasn't going to say when I was all better...)

You know, filling out the paperwork was interesting, describing my symptoms and current pain level, etc. And then answering all the evaluation questions. No, it doesn't actually hurt...but something doesn't feel quite right. With the physical exam, he moved my knee in all sorts of ways and asked "Does this hurt? What about this? Does THIS hurt? Anything here? What about here?"

He confirmed what I had suspected and hoped for--it's healed up and there's just some lingering muscle weakness that physical therapy can fix. Actually, he said "It's healed up. It's been healed up. Your accident was 9 months ago. The MRI was 6 months ago." They took x-rays for the hell of it, but another MRI won't be necessary. 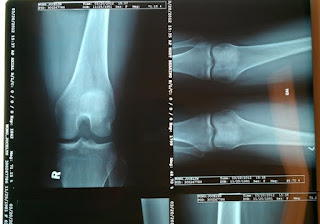 Part of me thought HOORAY HOORAY! Another part of me felt just a little bit silly--like I was a hypochondriac and nothing had been wrong with me, and silly rabbit, why did I wait so long to get a second opinion?

Truth is, I know I have an abnormal pain tolerance. If a doctor just told me to do whatever activity as long as it didn't hurt, well, we know what would happen. It's what I did for the first 3 months after my accident. I kept training as usual, did one last ironman race on it, and...the knee did not heal itself. Did I make it worse? We'll never know.

So I didn't trust myself. Better to keep the shackles on myself and let things heal on their own. Well...now the shackles are off! And so stage one of the master plan is already complete. Stage two shall commence this coming week, once I'm back in Delaware. That'll be another 4-6 weeks, then only five more stages of the Master Plan to Olympic glory!!

Yep, I'm currently in the ATL for my work conference/convention/meeting thing. A huge blur of seeing old friends, classmates, colleagues, networking with prosthetic & orthotic companies. More on all that later, but as this is a post about the Master Plan progress I thought I'd add a conversation with one of my former instructors (who knew me since 2004, i.e. several lifetimes ago, before the Wongstar days)...who wondered, like many people, if I'll go back to being a pro triathlete. So I told him my latest crazy/ambitious athletic goal: going to the 2016 Olympics for race walking.

He kind of looked at me and said "You know, for most other people I'd think it was just a pipe dream. But knowing you, it wouldn't surprise me if you actually did that."
Posted by Jocelyn Wong Neill at 4:06 PM