I took a purposefully longer winter break from running after feeling like last year’s race season dragged on a bit too long. Previous years have typically kicked off with the PHUNT trail race in early January and the Hearts for Heroes 5k in February, but I happened to be on call for work during PHUNT weekend (me and Aero cheered for friends on course anyway), and Hearts for Heroes got moved out to Veteran’s Day weekend in November.

So early March was my unexpected season opener, the Naked Bavarian 20-miler:

It snowed more than expected and I made the critical error of not wearing more rugged trail shoes to tackle the 5-6” of snow on the trail. I had anticipated the 2” of snow that came down the previous day would be already melting and thought I was so clever duct-taping my road shoes. HAHA! 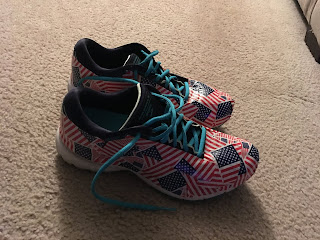 Instead it snowed even more the night before, and the plows were actually out as we were driving up race morning (1.5 hours north of home). I was hoping to do a year-over-year comparison as I also raced this last year, while being coached by someone else, and felt I had built up my mileage to a similar level on my own this winter (huge thanks to Taji 100 for the training motivation in February! 152.8 was my total mileage for the month of February, not for a single day...or week). 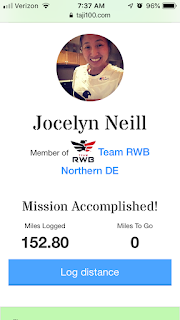 Unfortunately my ineptitude at choosing proper shoes cost me in time and placing, as I raced a pretty hard and consistent effort but traction was laughable on any minor incline or decline. I felt like I was skiing on the steeper downhills, and I’m pretty bad at skiing. 😂 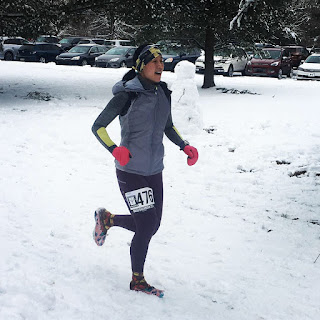 I ended up taking 8th place overall woman in 3:35, which was 4 places down and 23 minutes slower than in 2018. What hurt the most is that 4th place was only 3 minutes ahead, and over 20+ miles that’s only 9 seconds per mile. Could I have gained 9 seconds a mile in grippier trail shoes? Surely! So that’s some consolation, right? 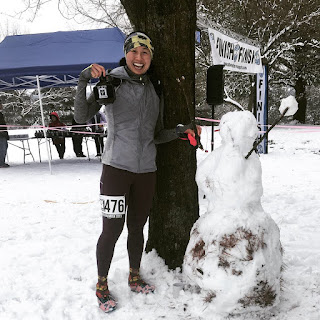 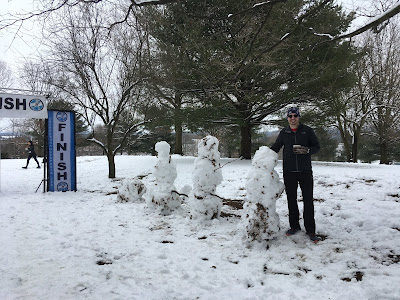 The snowmen lining the finish chute were delightful, as was racing with Team Hot Dog: it’s always a treat racing the same race as Ryan (hot dog man) and Mark (ketchup). Even though we see each other on a weekly basis with our Team RWB activities and crew each other at longer races, it’s rare that all 3 of us run the same race! 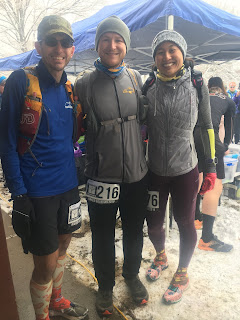 Next up was the Caesar Rodney half marathon right in town last weekend. I was mildly sick for the two weeks leading up to the race—not quite sick enough to miss work, but enough that I cut back on training significantly and wasn’t sure if it was just allergies with the changing of the seasons. 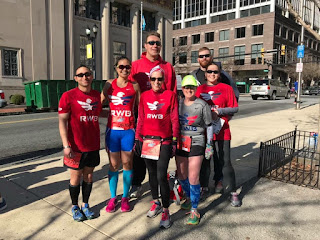 My PR is a 1:34 on this course from 3 years ago in super windy conditions, and even though I was pretty sure I wasn’t quite in PR shape last weekend, somehow I convinced myself that taking 2 down weeks leading into the race was an amazing taper, which I am usually terrible at. Apparently, I am not really good at setting goals for a half marathon (which is really just a training race for the Delaware Marathon at the end of April), because the only number I had in my head was my 1:34 PR...even though 7:10 pace seems fast for my current state of fitness. But hey, maybe with my amazing 2-week taper and being in an exciting race situation will allow my body to do magical things, right?


HAHA! Sometimes positive thinking really backfires on you when it’s not realistic. I went out way too hard (first mile was a 6:38, but it’s a downhill mile and I told myself to slow down). I hit a 7:08, then 7:19, 7:21...but I was really struggling to hold that pace, and only 4 miles into 13.1! I started to go backwards in the field and couldn’t even stay under 8-minute pace for miles 7 through 9, though I would attribute that more to a poor mental game of “well if I’m falling way off PR pace, what’s the point?”


Big mistake: I didn’t have a great (or any) plan B or plan C, and getting passed by the 1:40 pacers was demoralizing instead of motivating me to at least break 1:40. The last 4 miles are at least downhill before the final 1/4-mile uphill finish (brutal as always!), so I was able to muster up a little more pep and finish decently. I do remember my watch chirping at mile 12 and seeing a 1:32 elapsed time, and wishing that was my finish time instead of having over a mile to go. What I should’ve done (and I know better! I know better!) was to swallow my pride and started with the 1:40 pacers, then dialed down the pace if I felt better, instead of thinking “of course I’m going to go way faster than 1:40!!” 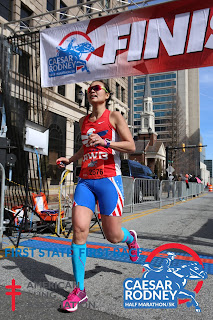 Negative splits are always the better way to go. Not positive splits. Even though I’m such a positive person. 😝


I’ve also been experimenting with Maurten drinks and gels because all the cool kids are doing it. Initial thoughts: 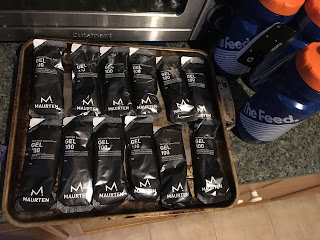 I’m about to head out on a big training run and experimenting with a mix of the 160 drink mix and a couple of them gels. To be continued!

In conclusion I am trying to be more prepared for the Delaware Marathon so you don’t get a bag of excuses like these two lame race reports: wah, it snowed a bunch and I didn’t wear the proper shoes, and wah, I was sick for 2 weeks and my pacing was 💩!
Posted by Jocelyn Wong Neill at 12:18 PM No comments: