Mastering a new sport is not easy. Race walking is really weird and kind of an unnatural way of walking. When I get frustrated with my lack of progress, I start to think I miss triathlon. Then I fall into the trap of looking too long at the closed door, and I get kind of depressed. It doesn't help that tri season is officially underway, most of my FB "friends" are triathletes, and every other status update is triathlon this, triathlon that. Oh please. I've thought of deactivating my account, opening up a new account with just "real" friends, or just doing some mass deletions.

I have to remind myself, this is the year of rehab. Even if I wanted to do triathlons, I have to let my body heal. So I might as well use this year to learn a new sport. Have a distraction. And have to remember that if I had the chance to learn how to swim from an expert back when I was a kid, and grew up with the proper technique, it would've made a big difference in my triathlon career. I asked Mr. Miyagi yesterday if it made a difference to learn race walking as an adult vs. a kid, and he said it didn't. (Phew.) You either get it, or you don't. Luckily I have demonstrated on multiple occasions that I am indeed trainable.

Luckily too for my psyche, I had a nice breakthrough this week, and triathlon can go on the backburner again. The key to my first year in the sport is to master the technique. It is EXTREMELY technique-heavy, and my worst fear is that I'll get DQ'ed for breaking one of the rules during a race. It's funny; there are two extremes: you can't go really fast with bad technique, but you can go TOO fast and get DQ'd if you have illegal technique. It all comes back to good technique.

My shins had been holding me back, and then they got a little better. I followed Mr. Miyagi's program and was able to progress to 10km training walks. But then my knees started bending too much on impact, and he said I had to go back to 5kms only. AUGH!!! Then I blurted out something about how maybe it's my stupid shoes that are holding me back??? Even though the Fastwitch'es are cool, with a low heel-to-toe drop, they aren't designed for race walking. Hell, most shoes aren't, unless you order a custom-made pair like Mr. Miyagi has.

So I continued my search for the perfect race walking shoe. Luckily minimalist shoes have become all the rage. You really want something that has a fairly thin sole with low stack height (the heel-to-toe drop) to keep you close to the ground, since you are heel striking and need to land with your toes sticking up. I think I've become a bit of a minimalist shoe whore. I've personally bought the following: 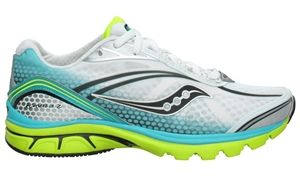 and then the Saucony Fastwitch 5, 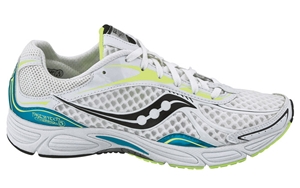 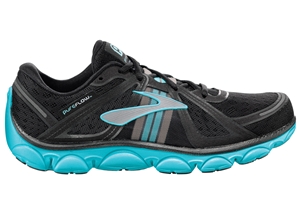 and this past week attained the New Balance 730's 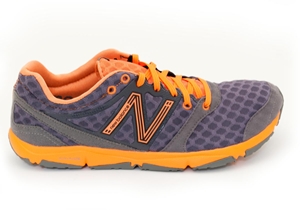 and then the Saucony Grid Type A4. 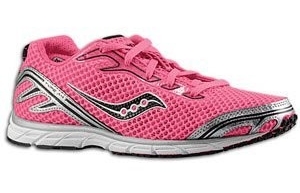 (Full disclosure: 3 of those pairs were purchased before I even contemplated race walking. I do like the idea of a more minimal shoe for... everything.)

I am also a total running shoe nerd. My original plan in college was to become a running shoe designer with my kinesiology degree and focus on biomechanics. The NB 730's (and also the PureFlow) have a bit of a negative heel/rocker heel, like the custom race walk shoe, which actually helps with the race walk heelstrike. You're not having to "fight the shoe" and force the heel to compress. Turns out this was one of the contributing factors to why my shins were getting so sore and my knee was bending at heel strike. (It's all in the biomechanics.)

I also came to the realization that various factors that make me, me, are going to help me hack the sport of race walking. My biomechanics background. My access to an orthotics & prosthetics lab. My physical and mental training as a professional Ironman triathlete. My inherent geekiness with wanting to tinker things myself (the MacGyver complex). This post was going to be about hacking the sport, in general, but I got a bit carried away with the shoes.

Anyway, breakthrough. All last week my homework was to focus on keeping the knees straight at heelstrike. I looked much better with the new shoes (730's). I still got tired, but at least I was legal. Then we threw in some surges at the end, and Mr. Miyagi remarked that my form and technique actually look better than many elite race walkers. (*squeal!*) Now if I could only hold it for 90 minutes rather than 90 seconds...

Exciting nonetheless. The Saucony Type A4's were actually more comfortable, with a very thin sole, but the heel is not rounded. And this is the part of the story where having a MacGyver complex and access to an O&P lab (+ lab technicians) comes in. This is also the part of the story where it is 6 minutes past my "get ready for bed alarm" and so this shall be, as they say, to be continued...
Posted by Jocelyn Wong Neill at 9:26 PM