I signed up for "Move It Delaware" last Tuesday, which is a free state-wide 10-week challenge to encourage people to exercise for at least 150 minutes per week. Which isn't much to a triathlete, but it is for a busy, hibernating triathlete and more volume than I've done for the last 5 weeks! That little push combined with slightly nicer weather and settling into our new routine here has helped, as I haven't missed a single day of exercising since the challenge started.

The main event of the week, of course, was the Phillies 5k! This was totally Kevin's idea for me to run it, since you get 4 game tickets (2 pre-season and 2 for opening weekend) with your entry ($50 for a long sleeve technical tee, a finisher's medal, AND the 4 game tickets!). Of course I turned the tables back on him and said if he signed up, we could get EIGHT game tickets...and he's the Phillies fan, not me!

I didn't realize how big of a 5k it was--6,000 people and it had sold out! My expectations and motivation were fairly LOW as I haven't done much in the last month and felt really crappy just running easy the past week. The chilly race morning temperature of "30-something, feels like 25" did not help. Luckily we bumped into the one other Team RWB Eagle who was running, J.R. from the Philly chapter!

He wanted to know my time goal and I said I had done 21-ish when I was in better shape and in warmer weather, so he wanted to run together as his goal was a 22:30. Good thing J.R. was there to push me, as I really felt like doing a 30-minute jog in the cold!

It was crowded in the first mile, and I still ran a surprising 6:56 while dodging people. I didn't think I had a sub-7 in me! My lungs hurt from the burning cold, and J.R. pulled away at the end of the second mile, but I kept him in sights. Mile 2 was a slower 7:17 and I felt weird and yucky--a too hot torso from wearing a windbreaker over a base layer and singlet, but burning cold lungs, and cold butt from the thin running tights. My last 1.1 miles was just a hair over 8 minutes as I finally spied the finish line and tried to reel in J.R. in his red RWB shirt. I ended up finishing only 4 seconds behind! We went 22:11 and 22:15, which is faster than I felt like doing that cold morning. So thank you J.R. for pushing me to go harder than I wanted to! 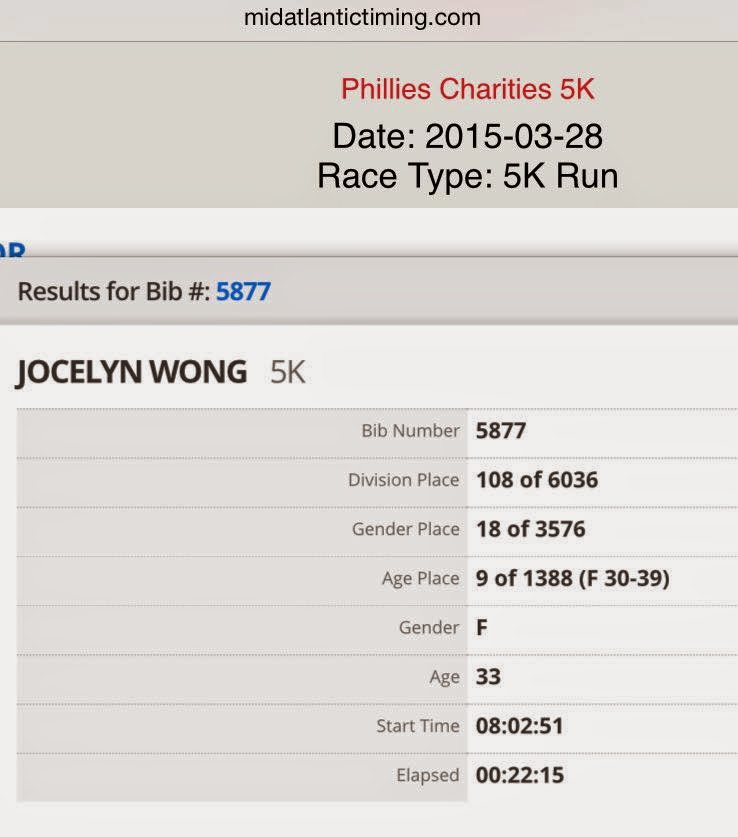 Kevin linked up with an old work buddy, Karen, and they walked the 5k together. 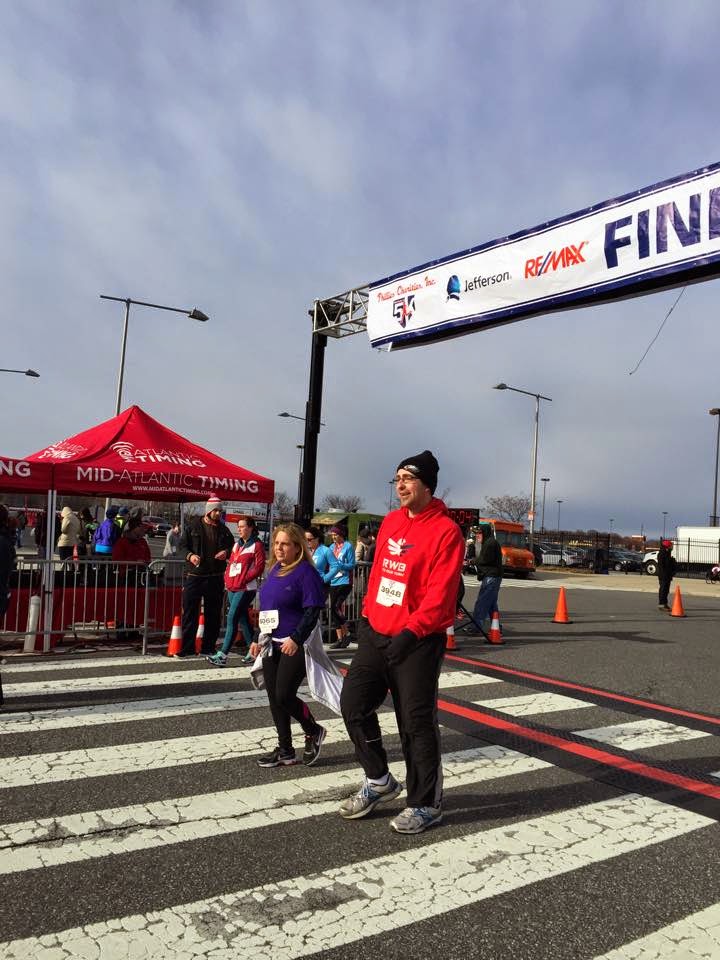 He did well for having broken his coccyx and pinkie toe while we were moving last month! We even got to go into the field afterwards... 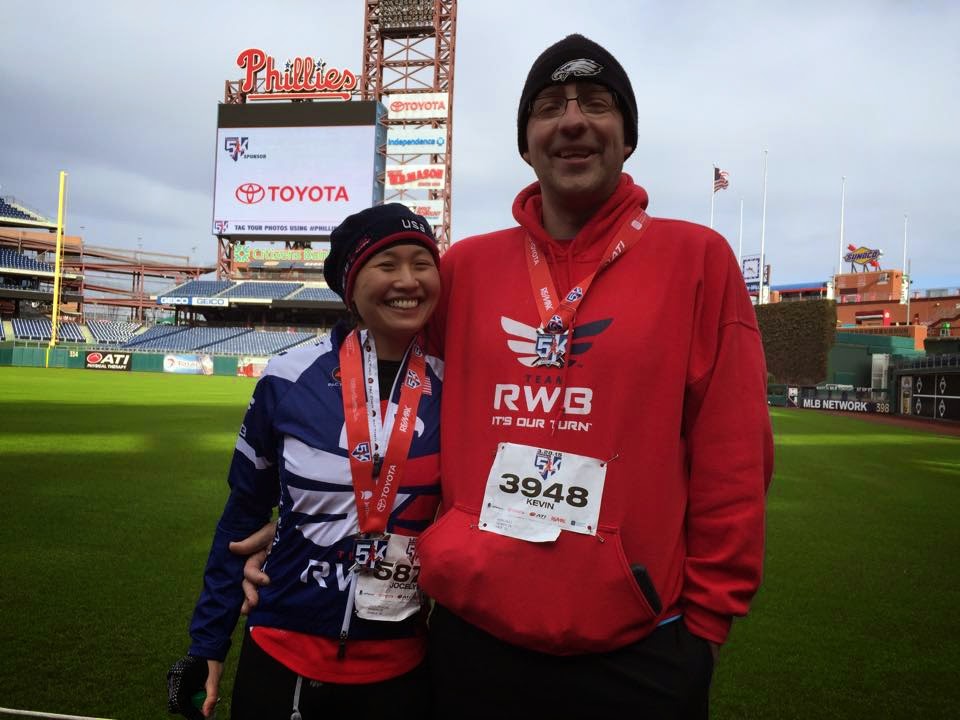 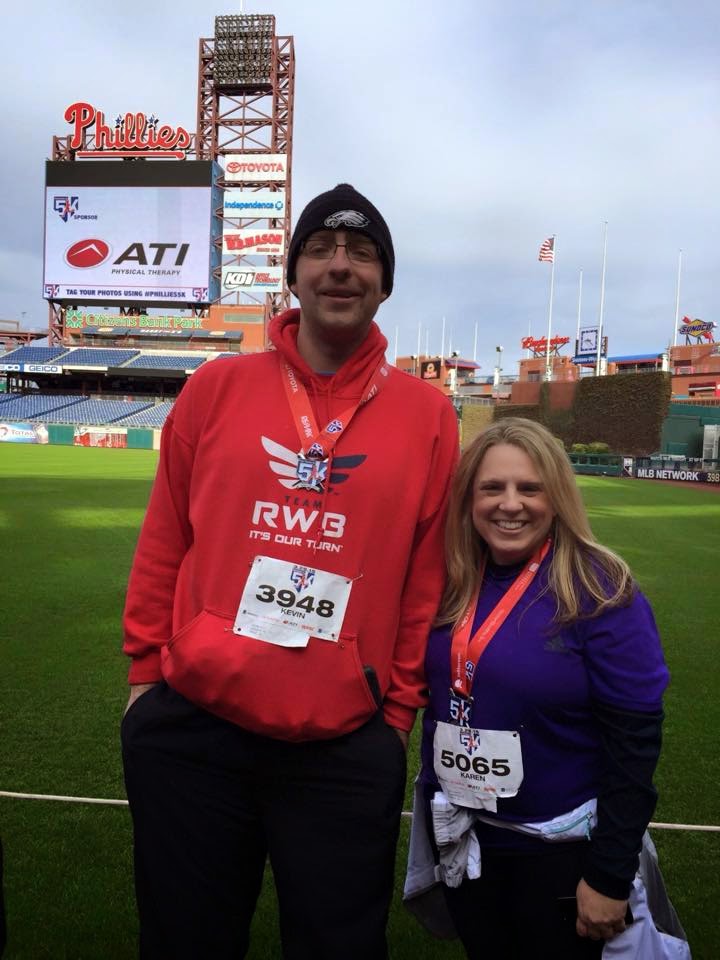 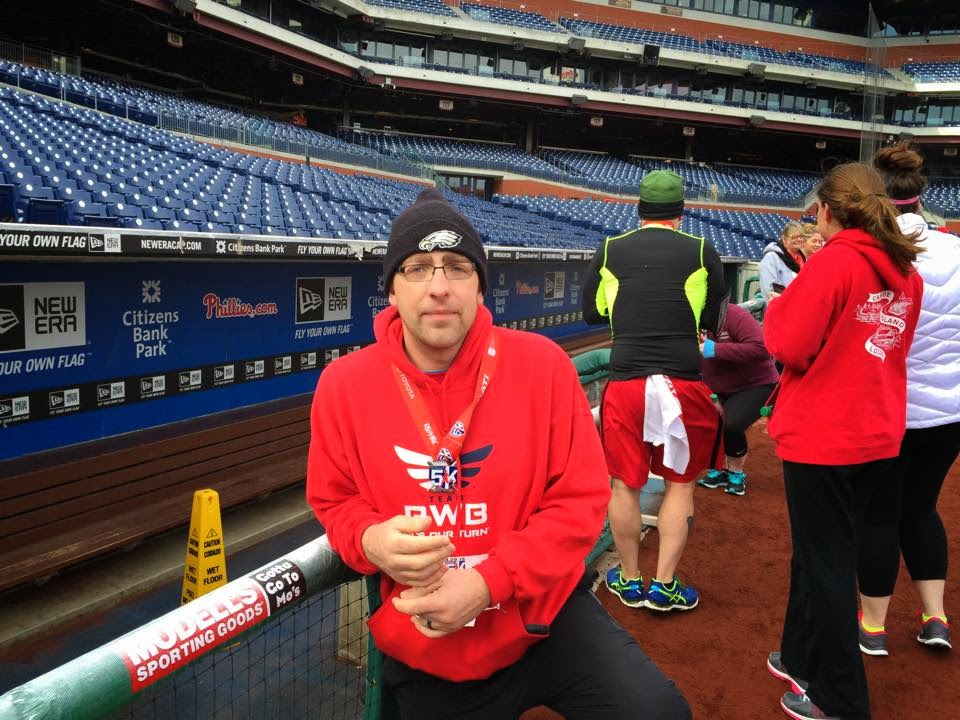 Someone thought Kevin was proposing at the dugout. Meanwhile, under my beanie, I was a loyal SF Giants fan!

Overall I was very impressed with the race organization, the incredible swag, and most importantly, the abundant and clean Porta Potties at the starting area. Afterwards we attended our first Team RWB Philly event, the post-Run As One social, and got to meet more Eagles. 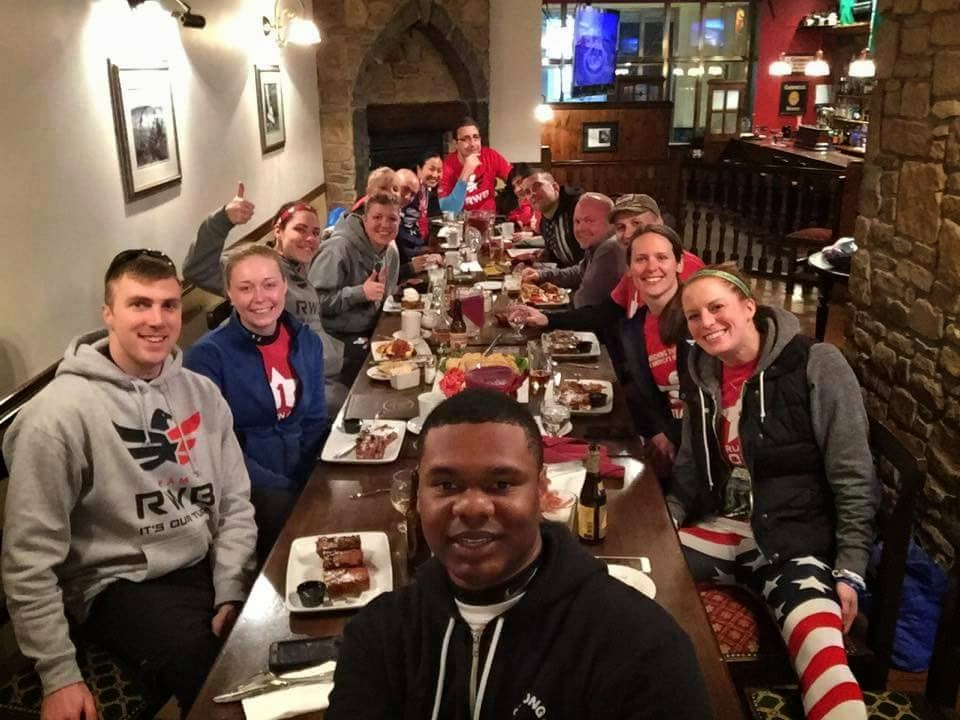 It may be a different chapter, but there's always the friendly members and camaraderie, amazing chapter captain, the selfies, and the crazy running tights. I love being a part of this team!
Posted by Jocelyn Wong Neill at 10:27 PM No comments: 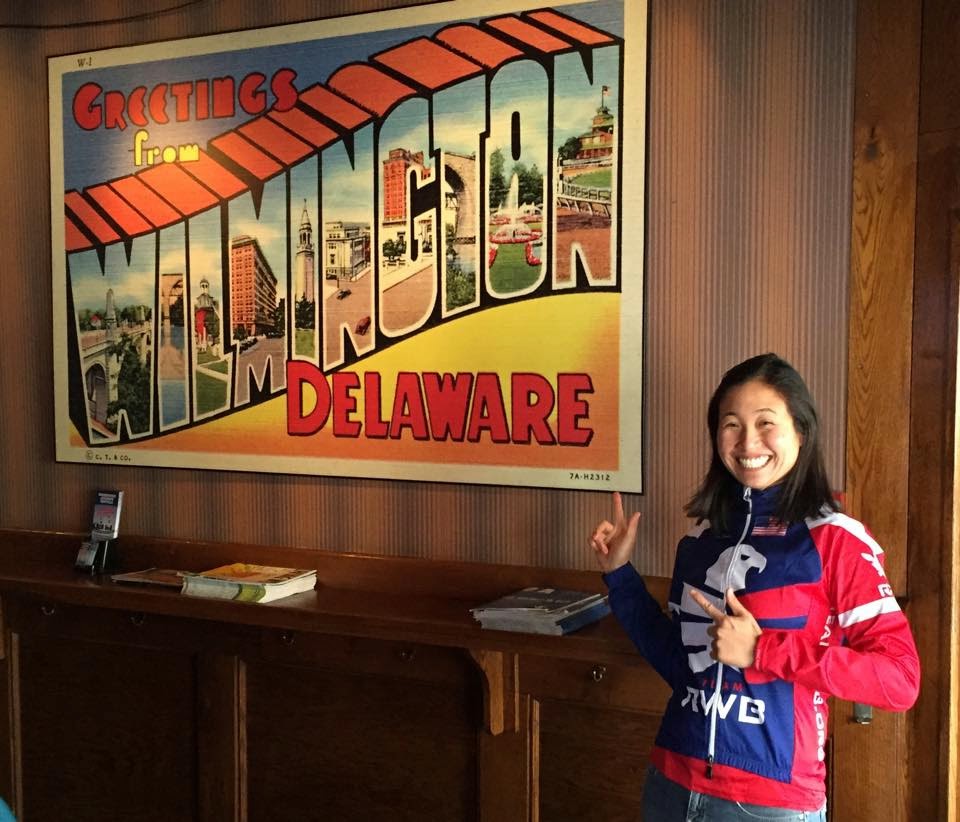 Lucky you, today you get a special "4 for the price of 1" blog update! We have had a lot going on the last 4 weeks, so much so that the training--and thus the blogging--has been sparse as-all-get-out. (Did I use that phrase right?)

Week #9. Last week in Bethesda = no work = all packing + one last run club!
Actually, run club was the only workout I did all week. 5 miles of running, plus lots of lifting and carrying boxes up and down stairs.


...And bicep curls during our good-bye happy hour...when unfortunately, we found out my Grandmother had just passed away. WHAT! NO! We knew we had to go home for the funeral...we packed up the moving truck the next morning and made our way back to Delaware on a somber note.


Week #10. First week in Delaware! I worked for 2 days and then got on a flight to California. Kevin was to follow me later that afternoon, but he was stranded and delayed thanks to a snowstorm. He finally got in another 2 days later on Friday. Of course we had to see the ocean right away, and get fed by Mom immediately. 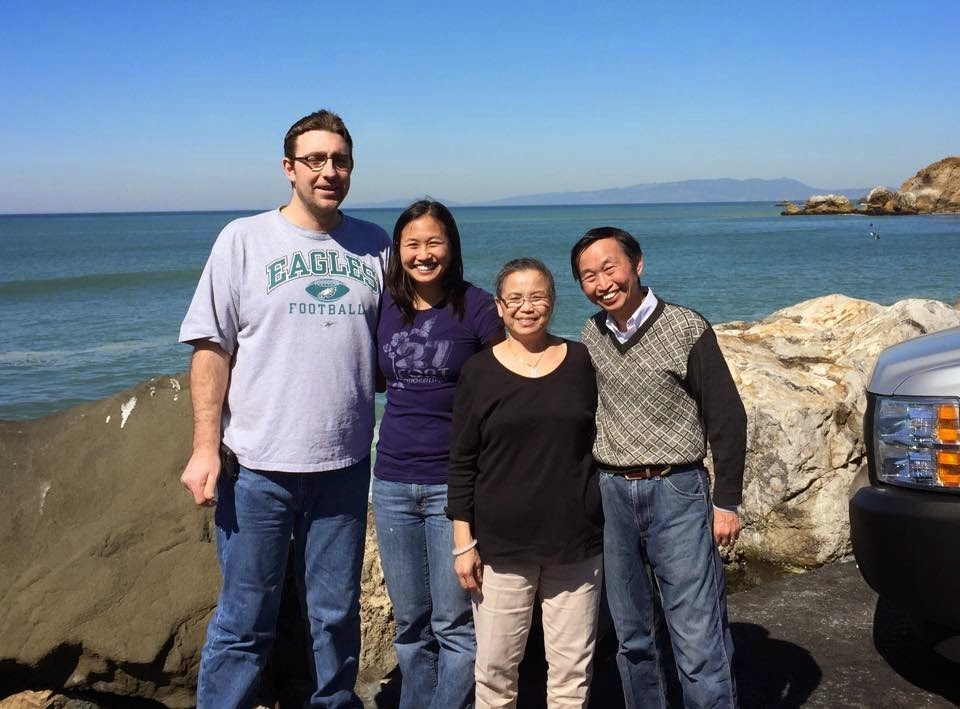 The only workout I did was a 7-mile run on good ol' Sawyer Camp Trail on Thursday. In shorts! Hello, California! Other than that, exercise consisted of keeping up with my favorite little rugrat, baby Harvey the wonder-nephew, who can now crawl and kick and is potty trained at 6 months old. 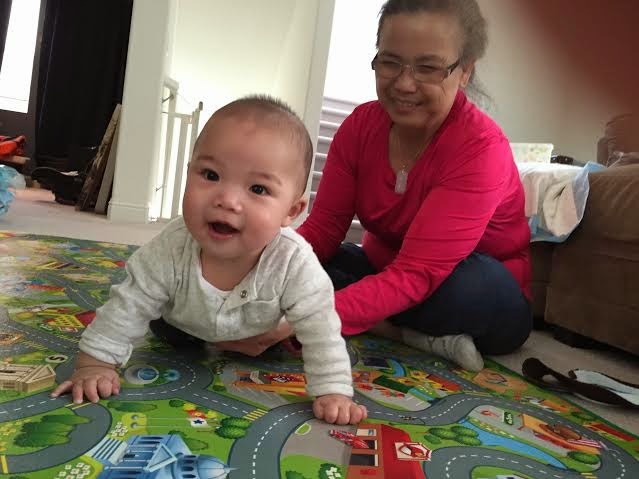 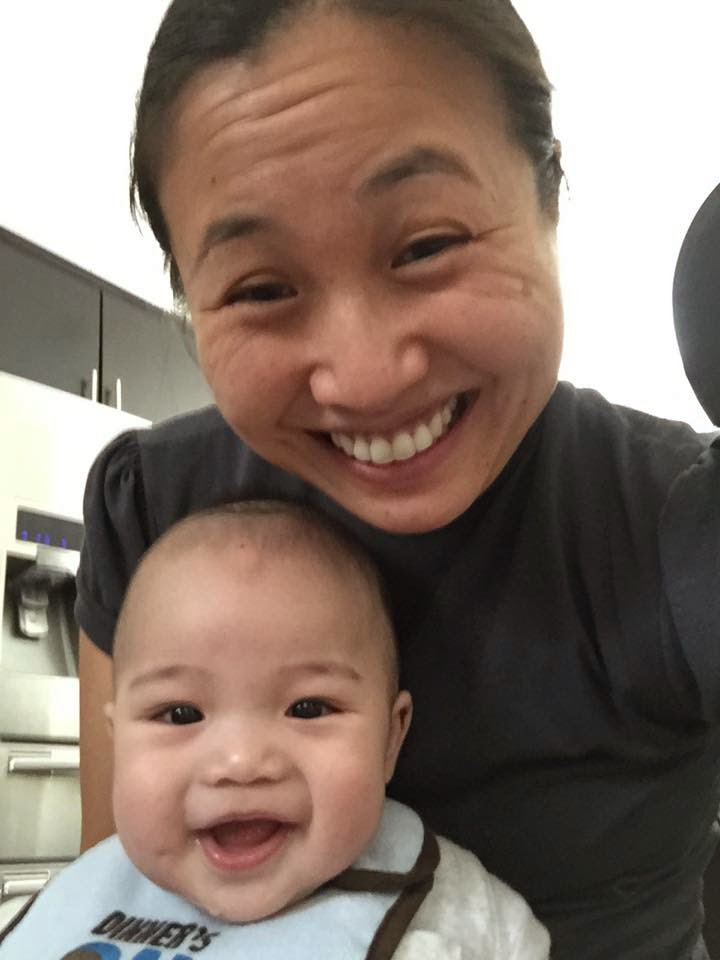 A lot of catching up with all of my family, consoling each other over and sharing our favorite memories of growing up in Grandma's house with my many, many cousins. My sister and I got to give the eugoogly/tribute from the 15 of us grandchildren at the church.

It was really, really tough to see our parents' grief, but of course so good to be there for each other. Most of us cousins grew up very close in age (we're talking about 10 of us in a 7-year span) and it was fun to bond again as older kids now, with the younger ones past legal drinking age and the oldest of us getting married off and spawning new babies. As good as it was to see everybody, I had a new job to get back to in Delaware... 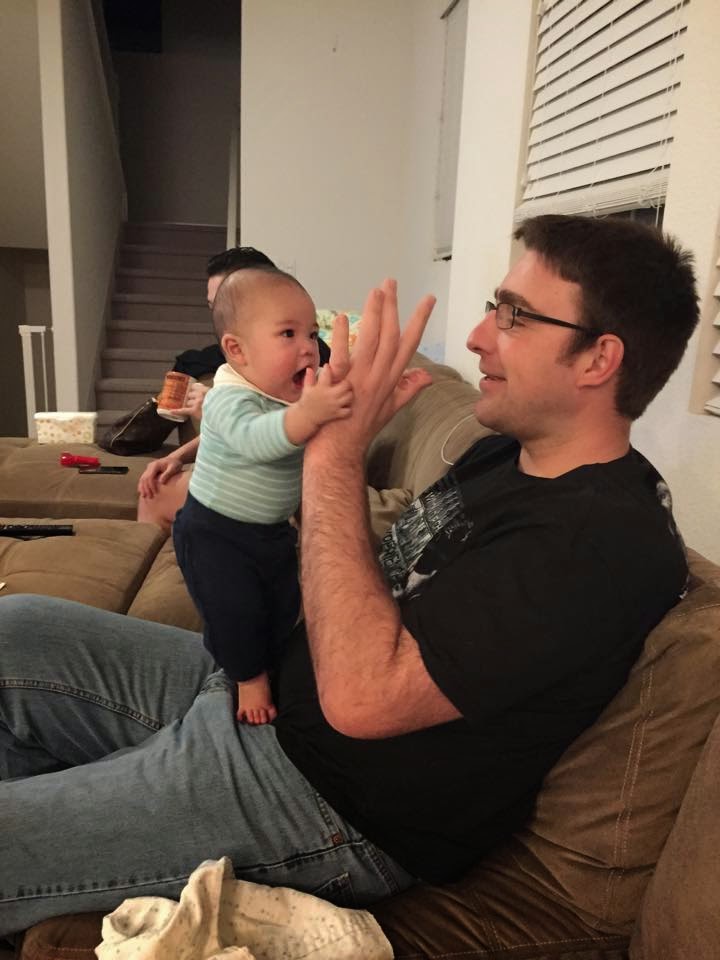 Week #11. The first full week of work. We got in Sunday night, and I felt the 4-hour jetlag all week. 3-hour time zone difference plus the bonus +1 hour of daylight savings time. I did a 6-mile run after work one of those days (Thursday? Friday?) and then Sunday rode the new TT bike for 2 hours on the trainer while catching up on Once Upon a Time (which I got re-hooked on during one of my flights...they started having Frozen episodes this season).

We also signed up for the gym: Delaware Swim & Fitness Center, which is where my old tri club, DSFC Tri-Dawgs are based out of. $19.99/month is so much cheaper than the $70/month we were paying at Washington Sports Club in Bethesda! (Which wasn't even the fancy Equinox gym! That was over $100/month!)

Week #12. This would be it! No longer jet-lagged, this would be the week I get back into training every day! We had some gorgeous 50+ degree sunny days after work, and I ran 7 miles after work on Monday.

Of course I then felt feverish by bedtime and knew by Tuesday morning my poor immune system had finally succumbed to the evil flu-ish thing going around at work. NOOOOOO...

This would NOT be the week I got back into training every day. :( Instead, I slept a ton and then slept a ton more. Did not do any more exercise, as clearly my body had been through the ringer the last few weeks and demanded a rest. Rest it would be! 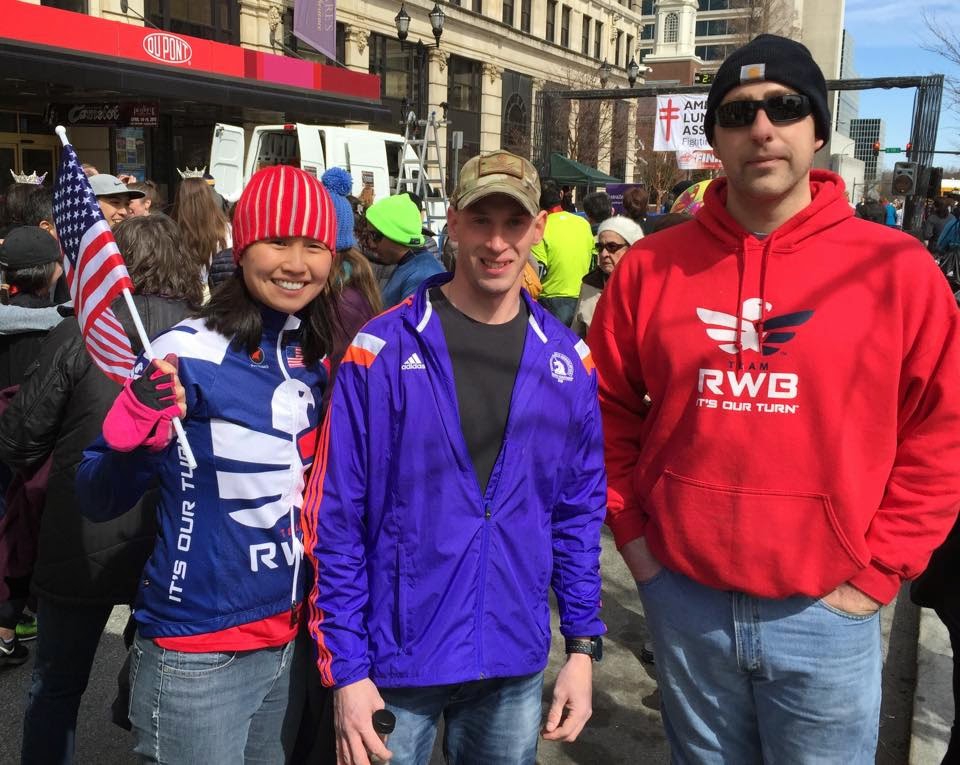 Today, Kevin and I went into downtown Wilmington in our Team RWB gear to support whatever RWB Eagles might be racing. We got tipped off that a fast guy from PA would be there, and our intention is to help start our own local RWB chapter in the Wilmington/Newark chapter. We got to meet Mike from Bethlehem, who ran a speedy 1:21, and also met 3 local Eagles running who would love to be part of a local chapter!

So here's to another week. This will be THE WEEK! 10 more weeks until the Rock Hall tri...here we go!
Posted by Jocelyn Wong Neill at 4:07 PM No comments: