How about a half?

So. I've been kicking around the idea of doing a half for the last few months. Not a half marathon, silly, I did already sign up for the Navy-Air Force half marathon in mid-September and bonus, the Army 10-miler at the end of October. I thought training to go fast at those run distances would be enough to curb my competitive appetite, but the triathlon monster inside of me itches too much to simply run.

The "half"--you know, a half-ironman, which I still call those because at age 31, I'm old school, having been in the tri world since I was 18. I still remember how silly it was when WTC re-branded the half IM distance as "70.3" so that the triathletes who hadn't yet done a full Ironman wouldn't feel lame, like "half" an athlete. (I still think it's wrong when someone says "I did an Ironman!" when they mean "I did an Ironman 70.3!") I did race one of the first 70.3 events in 2006 and remember what a joke it was when they did the roll-down for the "70.3 world championships" in Clearwater, FL. Basically anyone could grab a slot, because NOBODY wanted a slot!

But I digress. One of the reasons I've been reluctant to return to triathlon racing is that I'll always compare myself to how fast I used to be back when I could train and race full time. I definitely miss it and want to go fast again. Then I had a light bulb moment where I thought "but wait...I raced the Ironman distance almost exclusively as a professional. The last time I did a half was when I did Florida 70.3 in 2009 as my pro card qualifier!" So my PR from that race stands at 4:51. In my heart I know I'm capable of going faster than that, even with a big girl job now, and that excites me.

So thus began the "half ironman is my new perfect distance!" project. I'm enough of an endurance snob that I don't feel a half marathon or Olympic distance triathlon is challenging enough, and I don't have the time or energy (or MONEY...or DESIRE...) to train for a full Ironman. I'm still inspired by the sub-9 Ironman age group dude who only trains 12 hours a week, and figured that if I put in 10 hours of intense half ironman training each week I have a good chance to get back to sub-5 shape. It's about 10 weeks until the race I'm thinking of, so my mantra has been "10 weeks of 10 hours training!"

Yeah, I haven't signed up yet. I'm looking at the Half Full Triathlon that's only 30 miles from here, costs $150, is run by Rev3, and benefits the Ulman Cancer Fund for Young Adults. I am totally a "glass half full" kind of girl, so I love that it is called the "Half Full." 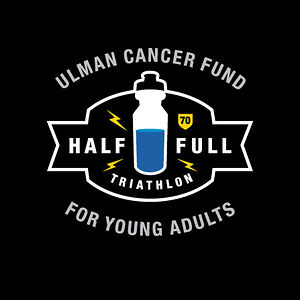 I don't think it will sell out, and haven't signed up yet because at the end of last year, I had promised myself I wouldn't sign up for a triathlon until I was out of credit card debt (acquired mostly from pro triathlete days). Luckily, if all goes well, this will be happening in the next 4 weeks. WHOOP WHOOP! And...okay, it's not technically the half ironman distance. Sure there's a 56-mile bike and 13.1-mile run, BUT...the swim is short by 0.3 miles, so it's 1500m (0.9mi) instead of 1.2 miles. WHICH I HAVE NO PROBLEM WITH! I say let's round up. Half ironman with a short swim? It's got my name all over it!

I'm also giving myself a chance to prove to myself that I will legitimately be in sub-5 shape before signing up. (The shorter swim helps.) The splits I'm kicking around in my head are a 29min swim, 2:44 bike, and 1:39 run. That adds up to 4:52 and then 7ish minutes for transitions. (Nothing like announcing this on the blog for accountability.) I only really want to swim twice a week (maybe 3x if I'm feeling peppy) although I'm still only at once a week status. Perhaps this will be the week I go TWICE.

As for biking, the bike course is supposedly somewhat hilly. I'll have to do a couple recon missions/race rehearsals. I wonder if 2:44 is too ambitious, as I'm feeling kind of slowpokey, but then I remind myself that the bike was once my strength, and I've gone 5:30 or faster on many of the Ironman courses, including Lake Placid and Wisconsin. Obviously I'm not at that level of fitness any more, but I don't see why I couldn't go the same speed over half the distance with half the training, right?? I've been doing The Sufferfest training videos at home during workdays, which I love (in a totally masochistic Wongstar kind of way), and will start incorporating some 60-mile time trials on the weekends along with the recon missions.

Running goes pretty well, I've learned to flog myself on the treadmill and even built up to a 13.1-mile session on Sunday with longer intervals. I ended up going 1:40:05 with an easy first mile and easy rest intervals, and am still sore two days later...I also realized quickly I should not be stupid trying to do TWO treadmill workouts in 3 days because the legs start crying and I need to NOT injure myself! There's a fine line between HTFU and being stupid. I'm not the athlete I used to be, but I'm going to hack myself to become a better half ironman amateur triathlete. I plan to do the treadmill half marathon every other weekend as a benchmark. I know the speed/distance doesn't equate completely to outdoor running (I keep it at 0%, not 1 or 2% like some people would say), but it definitely kicks my ass and is a great way to measure improvements in run fitness.

I also started my very first Whole30 last Thursday, which is like a 30-day strict-ish Paleo challenge. I'm trying to get leaner, not focus on my weight so much, but on healing my twisted relationship with food, eating, and weight acquired from my time on teamTBB. (haha! The baggage didn't stop at credit card debt!) I made some minor modifications to the guidelines to ensure that I'm fueling myself properly for my workouts and will report back when it's over, since I seem to only blog once a month these days! Until then, happy training y'all.
Posted by Jocelyn Wong Neill at 9:47 PM 4 comments: