Race walking is a track & field event that has been in the Summer Olympics since 1904. It's a bit under the radar in the USA and has traditionally been dominated by the Chinese, Russians, Mexicans, and Australians. Women's international events are raced at the 20km distance (12.4 miles) while the men have both a 20km and 50km.

Here is a video from last year's T&F world championships in Korea:


There are judges during official competitions that can give you yellow cards (warnings) and red cards (DQ!) if you break form and look too much like you are running. So what differentiates race walking from running? Technically, there are two rules judged by the "naked human eye":

B) You must land with your front leg's knee extended (straight leg) and keep it straight until it passes under your body. Yeah, it's weird. But that's how the rules evolved so that judges can differentiate race walking from running, even if normal walking looks a bit different.

Me, former professional triathlete and Ironman specialist (see my story), who refuses to be ordinary and dares to be extraordinary. I refuse to believe that my athletic peak has come and gone and am convinced I have yet to find out what I'm truly meant to do.

I am currently being coached from the ground up (literally!) by Jeff Salvage, my "Mr. Miyagi." How does one find a race walking Mr. Miyagi? Simply Google "race walking." He is webmaster of www.racewalk.com, which has a wealth of information on the sport of race walking. Jeff has also published several books and DVDs on race walking; clearly I am learning from an expert here!

Race walkers get asked "Why don't you just run?" ALL THE TIME. And even though I'm a total race walk rookie, I'm already getting this question. So I have three answers for you:

2) SIX-PACK ABS. You end up using more muscles to race walk (I liken it to fighting your body's urge to break into a run, since running is more efficient once you hit a certain speed), especially your core muscles. Mr. Miyagi says you use 95% of your muscles. Elite race walkers (did you watch the video above?) have better abs than most pro triathletes I've seen in my day. Photographic proof:

My abs hero: Liu Hong from China (who is a multiple medalist at the T&F World Championships and finished 4th in the 2008 Beijing Olympics):

Maria Michta's website also has a fantastic analogy for "Why walk when you can run?" She compares it to swimming the breast stroke. It's not the fastest stroke, but it is a legitimate Olympic event with technical rules. Some people are simply better at the breast stroke (or butterfly, or backstroke) than the fastest and most efficient stroke (front crawl AKA freestyle).

Think of race walking as a track & field event with special technique rules. 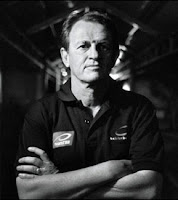 .:. My triathlon coach had always tried to teach me to run as "a race walker who cheats"--doing the "Ironman shuffle" with a high cadence and heel striking, as it suited my body type and running style. It was an efficient technique that did not break down when running 26.2 miles after swimming 2.4 miles and cycling 112 miles.

.:. When I was at a triathlon training camp in South Korea, we trained on the same track as the Korean national team's race walking contingent. I got to see them doing drills and intervals first-hand. They were AMAZING.

.:. As a certified prosthetist-orthotist, I work with patients every day that have physical disabilities and mobility impairments. Walking is an activity that most people take for granted. Since getting involved in this profession, I had vowed not to take this "simple" act of walking for granted, yet during my knee injury found myself grumbling that I could "only" walk. 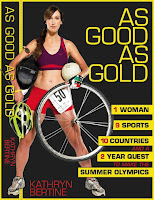 .:. Kathryn Bertine's book "As Good As Gold" is about trying various Olympic sports in her quest to become an Olympian. I met KB when she was a professional triathlete, and I a lowly amateur. Instead of dwelling on being injured and the unknown fate of my triathlon career, I realized I could focus my energy and athletic background on something new and exciting. I'll be 34 years young at the 2016 Olympics.