Since Halloween is on a Monday this year, technically we have the opportunity to celebrate it 4 nights in a row, starting Friday! (Or heck, if you partake in Thirsty Thursdays, make it five.) Ok, notice I said "technically," which really means after going out the past two nights til wee crazy hours and NOT feeling guilty about it (perks of the "being injured off season," hey-o!), I am pretty tired tonight and will be hitting the sack early!

I did however, manage to double book me and the Sherpa on Friday night. I know you are excited to see how awesome my Buzz Lightyear outfit turned out, but remember that the first of my 5 off-season goals was to make TWO Halloween costumes. I've always loved Halloween because my mom would make us our costumes from scratch. Dressing up is fun but making your own costume is half of it!

First up was the Bone Bash, a fancy charity gala at a local country club benefiting the Arthritis Foundation. My boss at Independence P&O had bought a table as a corporate sponsor, so it was important we at least swing by before we went to the Delaware Ultimate house party. We weren't about to do wardrobe changes...so yes, for the fancy fundraiser party at the fancy country club, the Sherpa went as this: 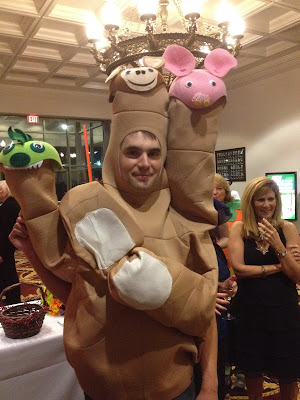 I'd say only maybe 10% of the guests were in costume. There were a lot of orthopaedic surgeons that we work with, since they were the primary sponsor of the event. They had this cool photo booth, with extra props in case you didn't have a costume, so we put some hats on the Sherpa's "big hand" and so they were finger puppets! 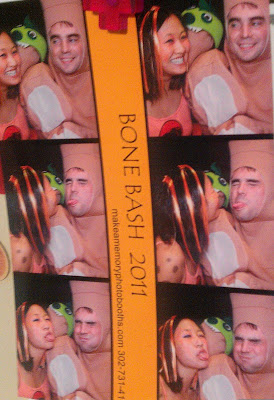 A lot of people asked what he was supposed to be. The ones that knew....you could tell they knew. I was not quite as inappropriate, but I was running around in tights and a leotard, and a big stick. I was the original Cheetara from Thundercats...the original series, circa the 1980's! I've seen the new reboot of it on the Cartoon Network and it's radically just not the same. It's a "reimagining" of the 80's version, and is just too weird and different. This picture is from the next party, where more people were dressed up: 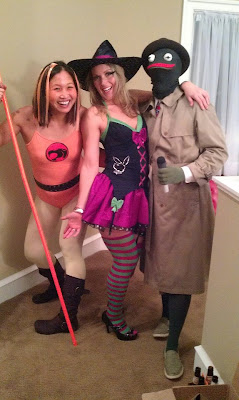 Obviously we didn't stick around all the fancy people at the country club long enough to cause too much trouble, despite the Sherpa being approached by one of the costume contest judges and trying to explain what "The Shocker" is. At the ultimate frisbee party, there were other inappropriately dressed guests. Such as a pussy kitty magnet and cock chicken magnet. heh heh 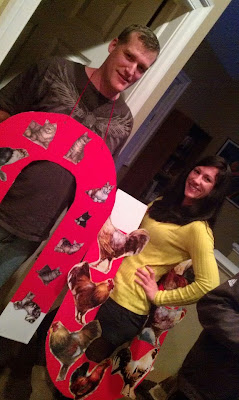 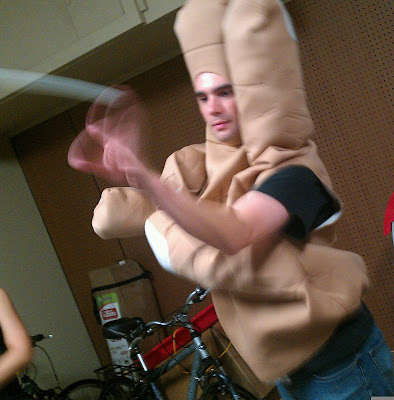 There were also adorable twins. If I had an identical twin, we'd get in all sorts of trouble! 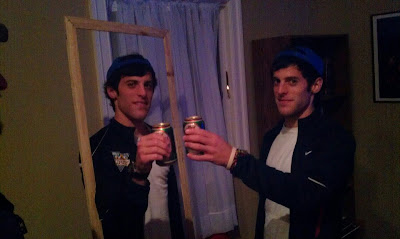 Some Terminator action...I'm still not done with Sarah Connor Chronicles but am sad I only have 2 more discs left! and the inevitable, costume prop switcharoo. My favorite Ninja Turtle was actually Michelangelo, not Leonardo: 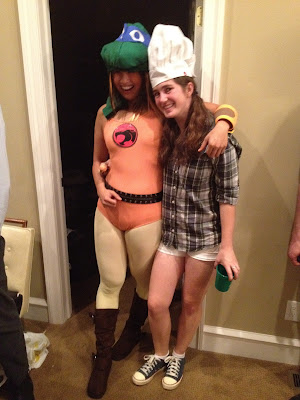 I mugged the chef and Cheetara became a deadly kitchen assassin. Wait, is that a bottle of Haamonii Shochu by the sink? I just noticed that. It totally wasn't staged! 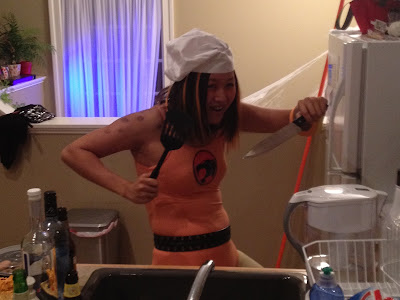 But I totally deny spanking innocent bystanders with the spatula, or being the source of the occasional outburst of "I'M NOT WEARING ANY PANTS!" 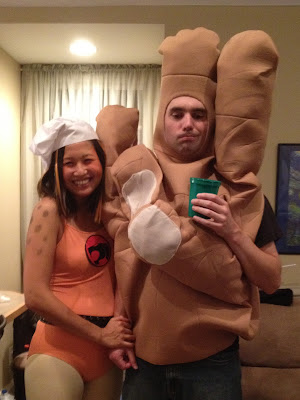 Next up, Buzz and Woody hit up a strange new planet, covered in snow. Stay tuned!!!
Posted by Jocelyn Wong Neill at 9:47 PM