So I got into the water. It was a mass start with everybody (300+ including the AquaVelo'ers), 2 loops in a protected part of the bay and different colored buoys. There were actually 3 other races going on since it was an "Endurance Festival"--AquaVelo, half IM and sprint--so the layout of the swim course was a touch confusing if you didn't know which buoys to aim for. I'd been out of the water for over a week, save for a 30min swim in a 12m pool at the hotel in El Salvador.

Let's repeat that swim picture, shall we? 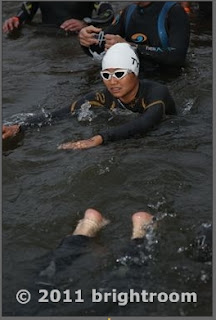 I felt tired but I kept telling myself "big training day" and motored through the swim. I got on some feet, sometimes, if they seemed like they were going the right direction (they usually weren't), but mostly I forged my own straight line (I've got excellent sighting skills since I'm used to being dropped by the pro packs) while punching the guys who got in my way. I definitely didn't feel so peppy and it was actually the legs that felt most tired--later in hindsight Coach Beck mentioned something about "travel legs" which didn't occur to me at the time. I spent the entire day before flying from El Salvador to Miami to Philadelphia, and then driving to Cambridge. I wore my SLS3 compression socks while traveling of course, but note-to-self, don't do a big travel day right before a big race...or even "just" a big training day!

Lap two of the swim, I felt like I was at least more warmed up, and increased my effort to get in a decent swim. Negative split? who knows, but it was what I call "negative effort" anyway, and my official time was 1:14:44. Awesome, right where I wanted to be. I was fairly happy getting out of the water! 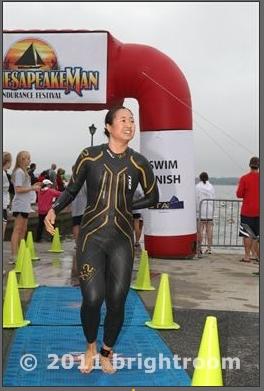 Transition was quick enough, and I got onto the bike, holding 20-21mph right away. Almost like I was racing normal, except for the fact that I wasn't used to smashing out a 5hr bike ride every weekend like it was nothing. So it seemed like both lack of fitness and mental training/patience made me feel like..."OMG WHY IS THIS TAKING FOREVER. IT'S NOT EVEN 90 MINUTES YET?" It's like when you are endurance training, you are training yourself both physically and mentally.

I amused myself seeing the road markings marked "C-MAN" as it reminded me of Sheldon Cooper in The Big Bang Theory (my favorite nerdy show). There was an episode where it was suggested he think of himself as the leader of a team of superheroes...like Professor X of the X-Men. Only he would call his minions... his "C-Men".


Yes. I still think it's hilarious.

My knee also started to complain a bit only 2 hours into the bike ride. I am what you call a big "gear masher" and this was when I felt the knee...hard efforts pushing a big gear (or going uphill, which this bike course didn't have). At the same time, I was developing just an absolutely massive headache, of which I was fairly certain was attributed to my severe lack of sleep the last week.

So I was battling a huge headache, a knee that didn't want to go so fast, and the whole negative inner monologue "are we there yet? why is this taking so long?" when BAM! or rather pffft...pffft...pffft... I got a flat tire in the rear tire. This was about 3.5hrs into the bike.

I WAS SO PISSED.

After 20 ironmans, this was my first time flatting in an ironman race. The culprit was a staple. Actually, I wasn't just pissed but felt devastated and almost helpless--not because I couldn't fix a flat tire, but it just felt like "the straw that broke the camel's back." I was already just feeling so awful at that point and was an incredible mess mentally. My head hurt so bad that I put in a brand new tube and did everything in about 10mins when I realized that the stem on the new tube was barely poking out of the rim on my Token wheel. It was too short and for whatever reason the valve extender wasn't in my little spare kit. My brain was so dead, so I thought it was perfectly fine if I didn't automatically switch out the tube to my other spare (which had a super extra long valve stem which would work) and figured "oh no, this will work!!!" I used one of my two precious CO2 cartridges and freezer burnt my index fingers as the CO2 went anywhere but inside the goddamn tube.

I stared at the now-empty CO2 canister and still-flat tire in horror and sorta disbelief (but sorta not, as there was that voice in my head that said "you f***ing dumba$$, I told you so"). I kind of lollygagged pondering what to do next, asking the bajillion triathletes who blazed by if they had a valve extender. I don't think anyone knew what I was talking about. I ate a snack and drank some more Gatorade and then went about changing my flat tire properly, with the right size valve and my 2nd (and last) CO2 cartridge. I knew this was my last chance, unless I wanted to rely on tech support or try to bum some spare parts off the other athletes). Under 10mins of course but I wasted nearly 30mins with that entire tire change.

This picture was clearly taken earlier on in the bike ride when I was actually feeling good! 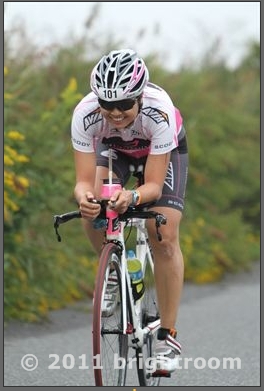 Ok, back on course but my spirits had taken QUITE the beating. I was already not feeling very well with the pounding headache and the complaining knee and now the ridiculously long tire change. *SIGH* This was when I gave in to the evil DNF demons.

I decided I was going to quit once I got into T2.

It's amazing how you can justify anything in your head when your day isn't going so well. And how negativity breeds negativity...

Or would I? To be continued...again!
Posted by Jocelyn Wong Neill at 6:42 PM