Part #3 of the ChesapeakeMan RR

so there I was, still crawling along on the bike, my only goal to get to T2 without further exacerbating my knee. My pace was now down to 17-18mph.
Since I decided I was quitting after T2, I should've felt relieved.
But I wasn't. I surprised myself by actually crying a couple times (ok more like 5 or 6 times)...I was breaking down and sobbing on the bike because I was so miserable, but more than that, just so disappointed with myself. Was I really a quitter? I thought about all the people who I would be letting down if I didn't finish...
The race organizers had linked me up with Sam and Noreen, a wonderful couple who had a beautiful property right on the water. Sam had waited up past midnight when I came in and went over the course maps with me up until 1am, and Noreen had driven me to the swim start in the morning. I only got a good look at their house on race morning; now how cool are their stairs??? 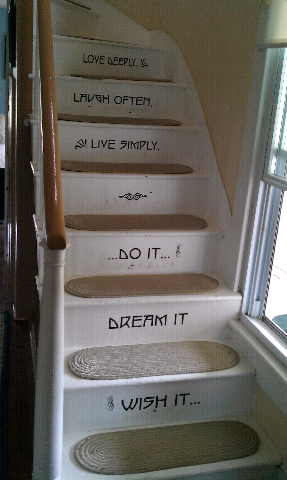 As I got ready race morning, Noreen pumped me up for the race by telling me Natascha Badmann stories. Yep! Sam and Noreen had hosted Natascha and her husband/coach Tony so many times in the past that they were Natascha's official USA headquarters. Those of you tri-newbies who have no idea who I'm talking about...this is the SIX-TIME KONA WORLD CHAMPION!!! She is 44 now and still racing Kona this weekend. I got to stay in Natascha's room... 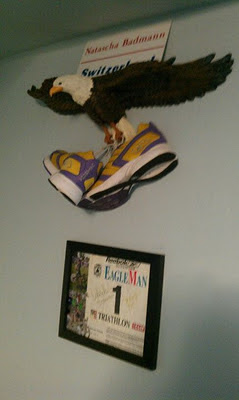 ...sleep in her bed, and drink coffee out of her smiley face mug. She was in fact, the original super smiley face girl when she raced! Natascha absolutely DOMINATED Ironman Hawaii when I was just a wee college triathlete getting into Ironmans for the first time. 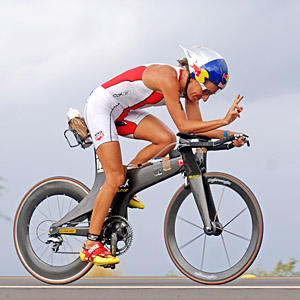 She is an absolute LEGEND!


Ironically one of Noreen's race morning stories about Natascha was how Tony would time her while practicing flat tire changes. There were also various examples about how mentally tough she was. How she would finish the bike with a flat tire and go on to run. Natascha would never quit and drafting cheaters would piss her off so much that she would run them down when it seemed impossible!! And somewhere in the depths of the pounding headache and dark thoughts, a small voice emerged...
"I'm not a quitter."
It was so quiet I could barely hear it.
"I'm NOT a quitter."
I had race as an age grouper for 8 years before getting recruited on teamTBB. It took me another 2 years after that to qualify for my pro license. As an amateur following the pros, I had always sworn that if I ever got to be fast enough to race as a professional, I wasn't going to be "one of those" pro triathletes who just DNF'ed when they were having a bad day.
And I was certainly having a bad day. But...
"I'M NOT A QUITTER!!!"
I knew that I had an easy out if I didn't want to finish. I hadn't slept much the last week and legitimately had a knee injury. But I knew I could finish the bike ride pedaling easy and how did I know if my knee would hurt when I was running? Run legs are different than bike legs.
I could quit and people would understand. But I knew that the person I would disappoint most was myself. Especially my teenage amateur trigeek self, the girl who would work part-time all summer at minimum wage in order to make enough money to pay for just one Ironman entry fee (and back then it was under $400!).
I was going to finish this motherf*cker!

but better to be "to be continued" than DNF'ed right???
Posted by Jocelyn Wong Neill at 6:03 PM