the new rules of race scheduling

My comments form is acting out, so I apologize if you've left a comment and I haven't been able to say thanks or anything. Thanks! The best part of being at home is all the delicious Asian restaurants everywhere. I had bibimbap at the K. Grill and Tofu House in San Bruno the other day: 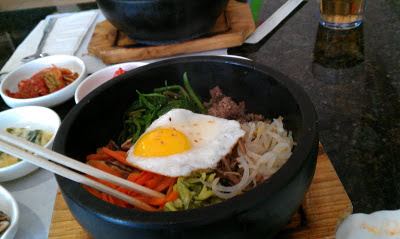 Delicious! I may hold a grudge against Korean drivers (or just one in particular), but not against their bibimbap. Or bulgogi.


Anyway, now that I've established the new rules of training, I've given some thought to my race schedule for 2012 and most of it is TBD. It kind of depends on how my race walk progress goes and how my knee is feeling for running.

1. Race walking: There's a whole Race Walk Grand Prix that USA Track & Field puts on with national championships in distances from 1 mile to 50km, even a one-hour championships. I would LOVE to get up to the 20km distance to see how I stack up with the Olympic Trials qualifying times, but not sure when I'll be ready. Right now my training is capped at one hour or 5 miles per session. A 20km would take 2+ hours. But one thing's for sure, I want to start racing in this. There's a reason it's called RACE walking. ;)

2. Running races: 5km or less. There were always these fun crazy 5km's I've wanted to do, but haven't. Because I was too much of a "hard-core" pro triathlete to do something fun that might get me injured. (And sure enough I get injured from an Ironman race, go figure.)

Here are some I'm thinking of for 2012:
a) The Barathon. 5 beers in 5km. Hosted by some of our friends who are ultramarathoners/frisbee plaers, it's a small grassroots "race" but we get real T-shirts. Did this last year in 24-ish minutes and took 2nd OA (the first two of us were both women!).
b) Zombie Run--"Run For Your Lives" right before Halloween near Baltimore. I want to go as a Zombie. Sherpa wants to go as a human. We really like The Walking Dead, what can I say? :)
c) some sort of Doggie Dash. We'll see if Socks can be trained up to run a 5km, or maybe there will be a one-mile version.
d) one of the city scavenger hunts. There are a few in Philadelphia: the Scavenger Dash (5/6/2012), Great Urban Race (9/15/2012), CitySolve Urban Race (7/7/2012). You get to do it in teams and it's like the Amazing Race on a much smaller scale. With costumes.
e) maaaaybe the Mud Run. (end of September) There are all kinds of obstacles and the hard-core athlete in me is still wary of getting hurt, but it sounds fun and I've always wanted to do one since college. (There was the Mud Run at Camp Pendleton I never made it to.)

3. Travel restrictions: with having a puppy and trying to minimize the credit card debt, all of the races are local, or at least within driving distance. (I'll make an exception for the Olympic Trials in Eugene, OR, but for now that's a bit of a stretch.) It will be cool to get Socks trained as a service dog so she can come on airplanes with us in the future. Cuz she's already too big to be chihuahua travel size! Despite being much smaller than...a horse. 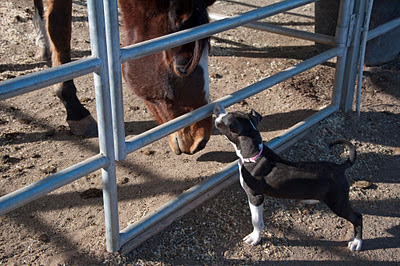 4. Sherpa-ing or spectating: I'll be sherpa-ing at Ironman Louisville for the Food Coach, and being my own Sherpa's #1 cheerleader at some of his tournaments. Well, me and Socks will be tied for #1, I think. But it will definitely be nice to support my besties and not always be so me, me, me in terms of racing.

5. Triathloning: I was going to JUST SAY NO, but Mac informed me of a unique local "triathlon" here that involves no swimming or running. And includes RACE WALKING. Which is pretty wild. It's the Marshalton Triathlon and it's a tiny little local race that's been going on for almost 40 years now. It even advertises itself as "the country's oldest triathlon". Not the traditional swim/bike/run at all, but something like a 2.3-mile bike, 3.0-mile canoe, 2.5-mile walk, and 2.3-mile bike. HMMMM. How could I resist that? I can bike, race walk, and rowed for Georgia Tech. It's not til October. Let's keep our eyes posted on this one!