Becoming who you want to be.

This may come as a surprise to some of you who don't know me in real life, or I guess in my previous real life. My online persona has always been more confident and outspoken than I really am, and definitely much more than I used to be.

Being home this week, I've been catching up with friends who knew me when I was in residency (pre-teamTBB 4 years ago), in college, and all the way back to high school, middle school, and elementary school. Oh, and let's not stop there--my family members that really knew me when I was an awkward and gangly pre-teen, and a chubby little toddler. I've also tapped into my old laptop (actually my first laptop) from post-college as I never backed up those files. (Somewhere in the world, the Sherpa is screaming and he's not sure why...) These days kids get laptops in elementary schools. CRAZY.

Suffice it to say, I've unintentionally had some time to reflect on who I used to be and how much I've changed and grown up. It's never been as striking as when I read through some private journal entries I wrote over 8 years ago, at the ripe old age of 22. I was in my "year off" in between finishing college and applying to graduate schools, trying to figure out what I wanted to do next.

How did I change? I made myself. A little bit of a time capsule from...


The Girl That I Am Right Now can’t really get around by herself, depends on others (especially mommy), has eating issues and obsessions, is scared of a lot of things, sometimes gets too needy (yech), isn’t happy with the current state of affairs, is often wishing she were somewhere else, and feels lost, like she needs to find herself.  Wonders too much about what a certain guy thinks, reads into things and obsesses way too much, has her whole day revolve around things she can’t control.  Sometimes she feels she can’t even control her own life, hasn’t figured it out yet.
Another year begins in a week and a half; my goal for the coming year is to become The Girl That I Want to Become.  I believe thinking about this Girl every day, and striving to become her, will help me improve myself bit by bit, so that I become basically a whole different person by the time I leave for graduate school.  Of course, the two Girls aren’t completely so different--there is definitely some overlap.  Maybe it sounds a bit materialistic, but this new laptop and finally acquiring my own car (it’s beautiful!) will be helping me forge the path to my independence at last.  At 22, I wouldn’t say it’s about damn time, but it is about a rather damn good time and as good a time as any. 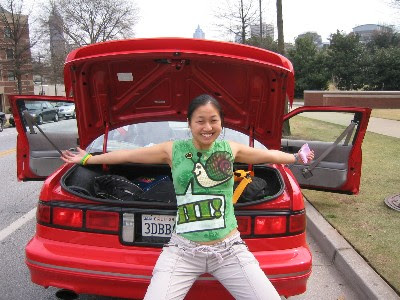 The hilarious part is that 8+ years ago, that "new laptop" is now a total dinosaur. It's sooo heavy and slow! The battery is so dead that it can only be powered up with the cord plugged in, and it overheats easily so the very noisy fan is going full blast. I actually took this with me to my first teamTBB camp in fall of 2008, so it lasted me a good 5 years. Similarly, that beautiful new car (it was a '93 Chevy Lumina Z34 coupe, pictured above during spring break 2005) lasted me through my adventures in Atlanta and Dallas before it went kaput. One of the side mirrors was held up with duct tape and the radiator kept leaking, so I'd refill it before I drove anywhere. I wasn't able to scam anyone on Craigslist into buying it, and really excited that CarMax gave me $500 for it!

We did in fact go on many adventures together, me, that laptop, and my first car. (I didn't get my driver's license until I was 21.) Have I become The Girl That I Want to Become? It took me much more than those 8 months in between that journal entry and when I left for graduate school. Some of those things I've even struggled with very recently--not obsessing over everything that I eat, and being very happy. I wouldn't say I've got my life figured out, but I'm pretty close.

For the most part, when I re-read that post 8 years later, I wanted to go back in time and hug my 22-year-old self. Tell her things would get better, but I think she knew that. Because she was on the right track, and she had a plan. She knew who she wanted to become, and she went after it fervently.
Posted by Jocelyn Wong Neill at 7:30 AM