I ran a half marathon yesterday morning, but they haven't posted any race photos yet, and what's a race report without action shots, right??

I also need to blog about my second year at the Nation's Triathlon. Apparently it is DC's only triathlon (according to www.trifind.com anyway). Last year, I was working full-time at Walter Reed and ended up on a wounded warrior relay team with Josh. Hmm, I don't think I ever mentioned that we "won" our division but ended up getting DQ'd because he only did one loop of the bike by accident. Details, details!

This year, the RWB DC tri leaders Chris and Marjorie recruited me to help coach some newbies with our first ever triathlon training series. (Something about me being an ex-pro triathlete and full of questionable knowledge.) It would consist of 8 weeks of various triathlon clinics starting in July. I couldn't make all the sessions, but that was the same for everybody being busy during summer and being spread out all over the DMV region (that's local speak for DC-Maryland-Virginia and why you have to go to the "MVA" and not the "DMV" to get your driver's license sorted out...because calling that the "DMV" would be confusing). Our fourth leader, Lee, has been doing tris since the 80's or something ridiculous! So amongst the four of us, there was always at least a couple leaders covering the different practices and clinics.

I took my job as newbie coach very seriously! I made sure to make hand-drawn flyers (in colors!) for my first presentation at the intro clinic. I got to talk about "How to Fit Triathlon Training into a Busy Life" (which I am still trying to figure out). Filled with plenty of exclamation marks!!! 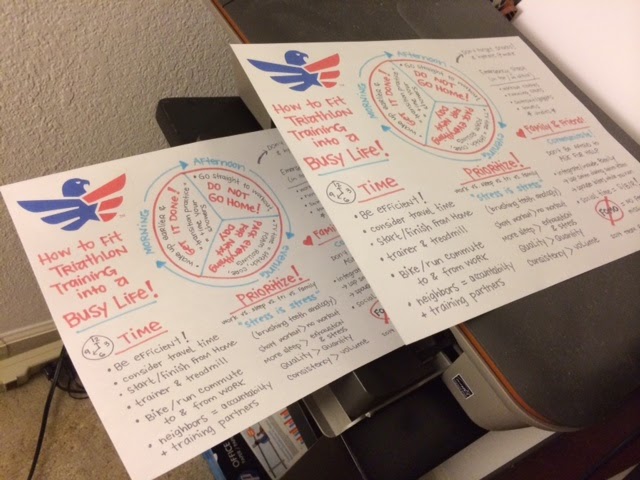 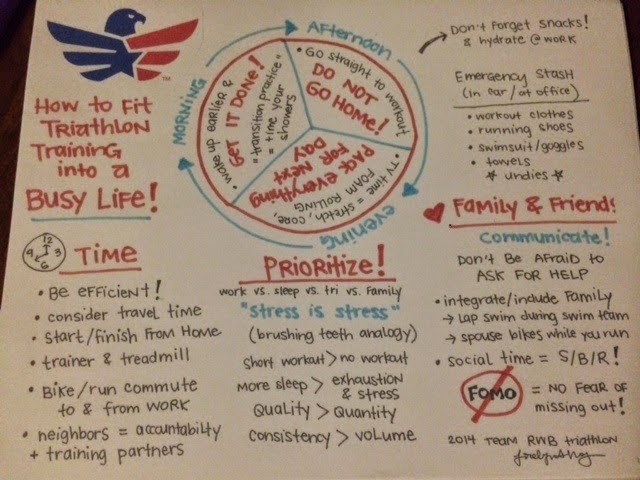 Yes, speaking of exclamation marks, it was very exciting being around newbies! Actually, I consider anyone with less than 5 years in the sport a newbie, not to be elitist but because I feel like an old lady in triathlon having done it for the last 15 years. There was just always that nervous excitement of "OMG I signed up for this crazy scary three-sport thing and I don't know if I can actually do this or if I will drown or crash my bike or collapse on the run!!" that reminded me of the fun and excitement and scariness of my own newbie years.

So I give the RWB newbies a ton of credit for getting me excited about triathlon again this summer (in addition to Beck and Amy and Randy of course). When we had the first couple of RWB tri leader meetings, I was kind of in that whole burnt out "one-and-done" mentality after the Rock Hall triathlon. So thanks, Chris and Marjorie, for pulling me back into this. I loved it! I am totally all trigeeked out again.


As for race day, we were all a bit sad the swim was cancelled the night before (although most people found out the morning of). There was a sewage spill up the Potomac River after it rained very hard the day before, and so...well, as we reassured ourselves, nobody wants to swim in the POO-tomac. It always sucks when a swim is cancelled, as much as we know it's for our own safety. We had several newbies that were very nervous about the swim but still didn't wish for it to be cancelled! It's not a triathlon without the swim. This is the second local race (Columbia Tri in May had the same thing happen) with a cancelled swim this year, and we had a few athletes who have done those two "duathlons" but still have not done a triathlon. 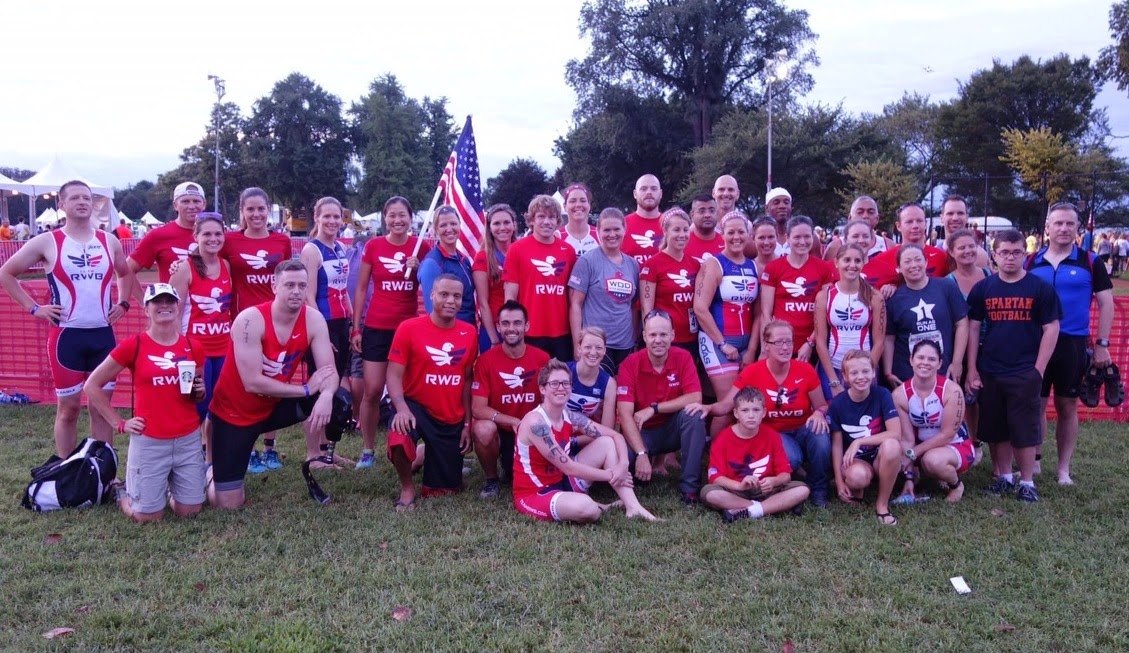 Still, we had an amazing turnout for both the sprint and Olympic distances. I didn't race, as I proudly yelled at everybody, rang the cowbell, took some photos, and had the most important job of being flag bearer for Team RWB. (We run it back and forth for anyone who wants to run with it through the finisher's chute.) 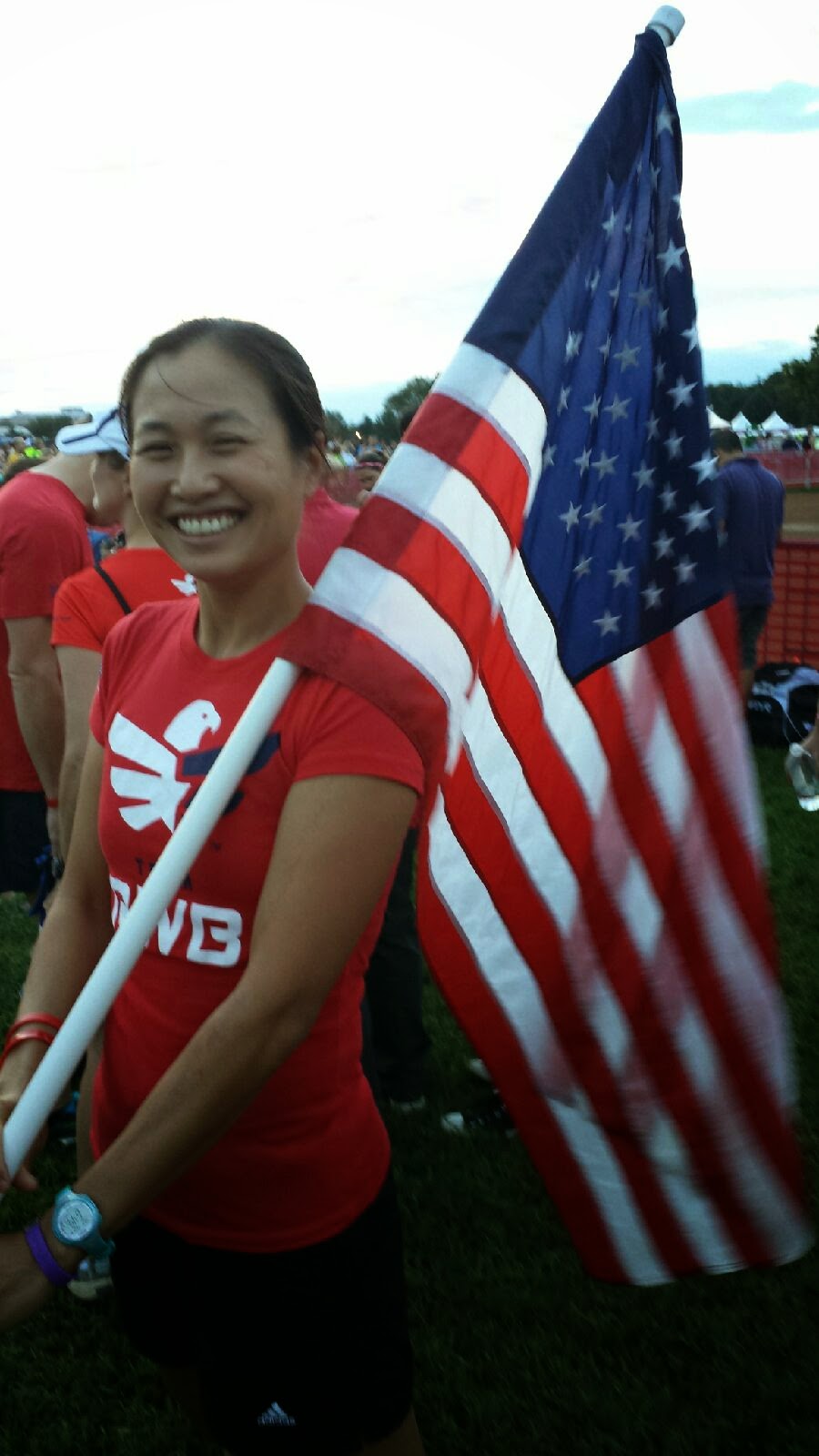 Logistically as a spectator, it was pretty difficult to track 30+ athletes in different age groups and divisions, doing the two different events! The race is so big that as the first Olympic competitors were finishing up the run, there were still people waiting in the last sprint triathlon wave to start their race.

I tried to cheer for as many people as possible, yelled a lot, waved the flag, had a grumpy old lady tell me that the flag was hitting runners in the face, passed the flag over to our finishers, and ran it back. I wanted to yell for every RWB person but there were so many!!


And if you didn't catch me on course yelling and waving the flag, here I am again. And the newbies that ran it in: 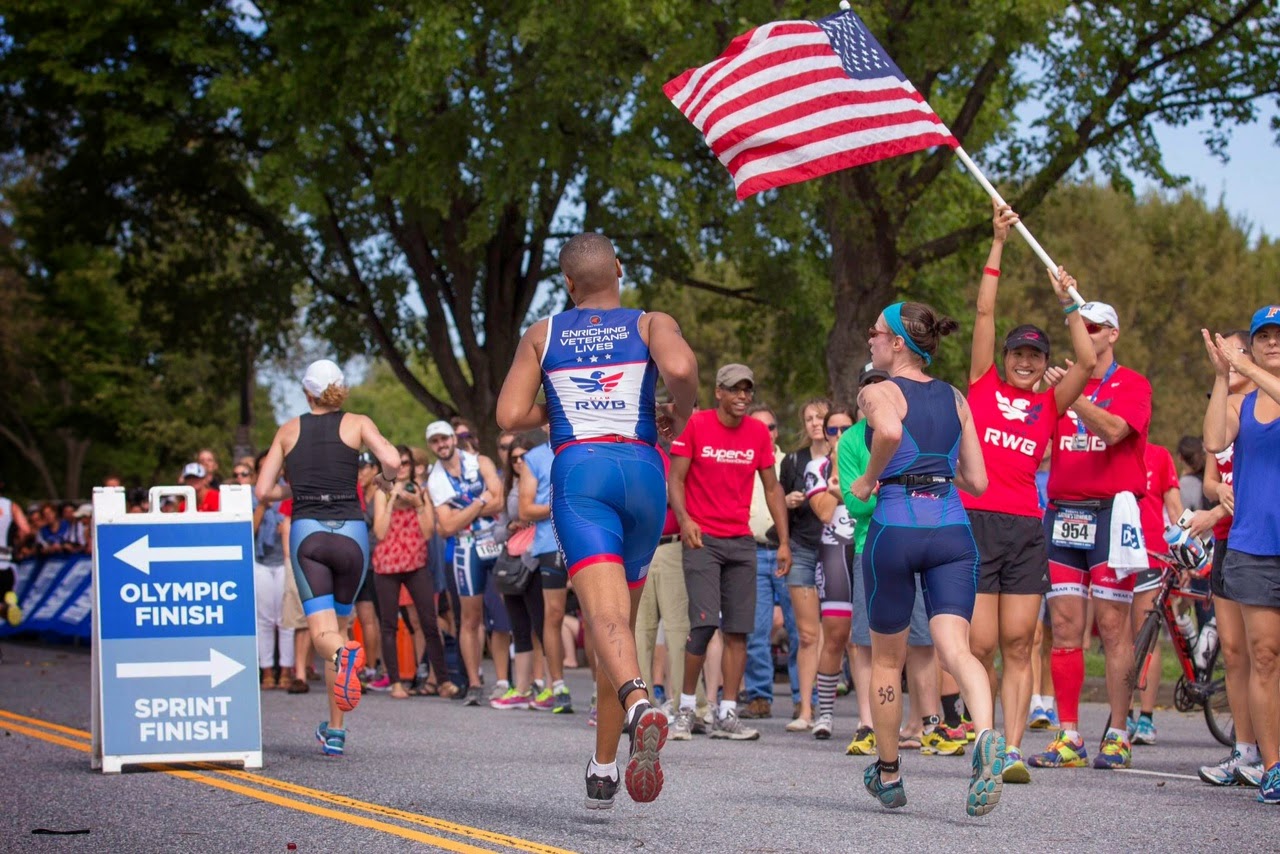 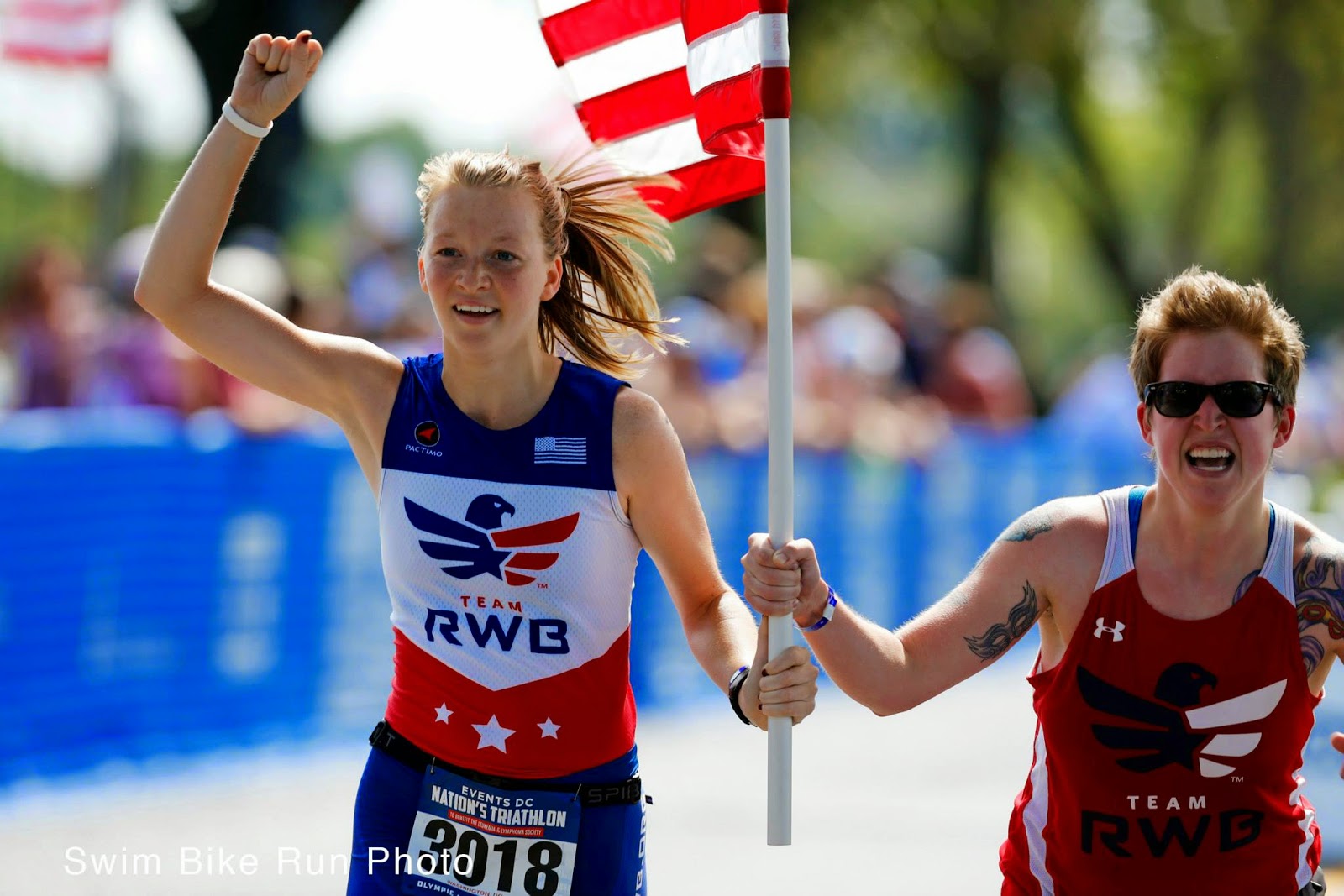 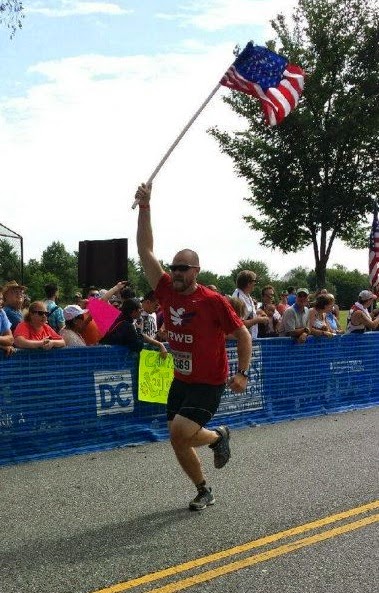 So yes, sign me up to coach again! I am happy to ramble on and on and tell all my old triathlon stories ("that one time, it was my first triathlon and I doggy-paddled the swim and got a flat tire on the bike...") and provide questionable advice ("you should definitely eat ice cream the night before a race") where apparently nobody can tell if I'm telling the truth or not (I totally am) because I smile a lot and say outrageous things. I haven't even gotten to the whole chapter of "this one time, at TeamTBB training camp..." but there will be more time for more stories next season.

In the meantime, I am super proud of all you newbies! YAY! We will do this again, but with a swim first, ok? 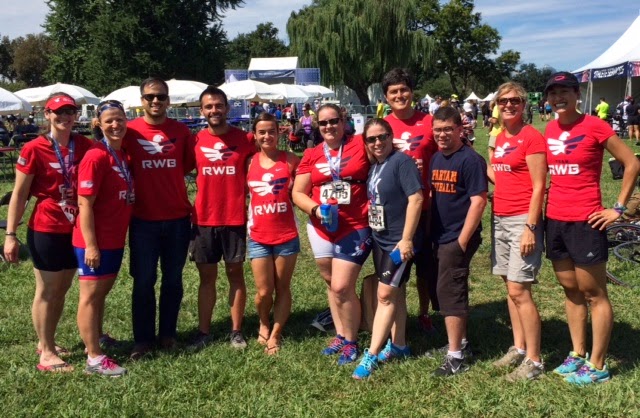