As we were driving home after this race, I realized it marked my 15th year of triathlon. Like I've mentioned before, I keep trying to quit triathlon, but ever since I was 18 years old in the summer of 2000, I've done at least one sprint triathlon (and up to 8 ironmans in 2010). I almost broke the streak last year, but snuck in that Half Full Olympic in October to keep the streak alive.

It's been a week since the race and the official photos (with official watermarks) are up, so high time for a race report before I get all googly-eyed about marathon training! Friday night before the race, me and Kevin drove the 90 minutes up to Chestertown (15 miles from Rock Hall) to a crappy cheap hotel we booked last-minute on Priceline. Whatever you do, don't ever stay at the Driftwood Inn. It's a very sh*tty motel in a liquor store parking lot. Despite our reservation and the obvious "VACANCY" sign out front, the guy at the front desk was extremely rude and told us our reservation didn't exist, and that they were completely booked. SO...with all the local hotels sold out, we ended up driving another hour+ up to Delaware to Kevin's dad's house. Which was all really dumb, as the whole point of driving up the night before was so could get some extra sleep. Yup, didn't happen!

As far as expectations going into race morning, I expected to have a solid race but nothing really spunky. I've learned throughout these 15 years (and especially in the 2 years after stepping down from the pro ranks):

"Don't be upset by the results you didn't get with the work you didn't do."

So what can you expect from sitting on your butt most of winter and then cranking up the training for one month leading up to the race? Well, you saw my 5-week program. I did train every day, but had some substitutions here and there. I swam only once a week for 3 of those 5 weeks (twice a week for two weeks). Yup, 7 swims after over 6 months of no swimming! One outdoor bike per week, a couple on the trainer during the week, including some great Sufferfest sessions. And a 10k running race thrown in.

So after I had set up transition and was ready to head to the beach start, I realized I didn't have my timing chip on. I emptied everything out of my backpack and had to run from the timing people to registration to the timing people to get a new chip. Then went back to my backpack and found my original chip (with the black timing strap) velcroed to my black backpack. D'oh. Good adrenaline surge to start the day!

SWIM:
The water temp was 68*F and I was quite comfortable in my full-sleeve wetsuit. I had practiced in it at the pool a few days prior and found the arms restrictive and tiring, but felt good when the gun went off on race morning. Women 39 & Under started as the second wave, 4 minutes back. The rest of the women, 40+, would start 8 minutes later. As with all open water swims, I told myself to go hard but stay calm and sight the buoys. I've learned not to blindly follow other swimmers trying to catch a draft because they tend to either go off course of kick you in the face with a frog-kick when they try sighting. So I thought I was doing a good job, going from corner buoy to corner buoy with clear water. It was two laps and just the last leg going into the sun was hard to sight.

I thought I had gone way off course because I found myself tangled in a bunch of swimmers, but then I realized I had caught the previous wave. Went steady, steady, got yanked onto the dock at the swim finish, saw 30-something on my watch (I started it with 30 seconds to go) and thought "ok, just as I thought." I didn't realize it was such a bad swim until I looked at the results later. Oh well! I did my signature "must've been a long swim, move on" thought process and focused on the next leg. 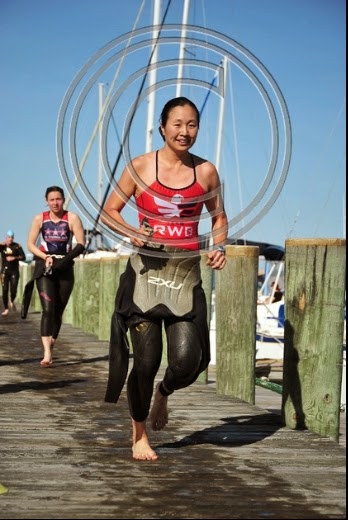 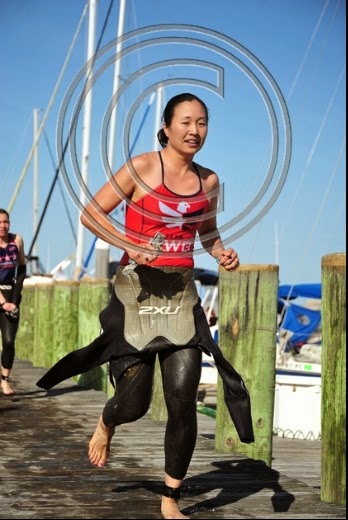 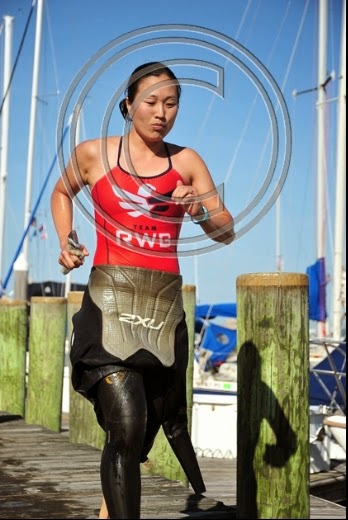 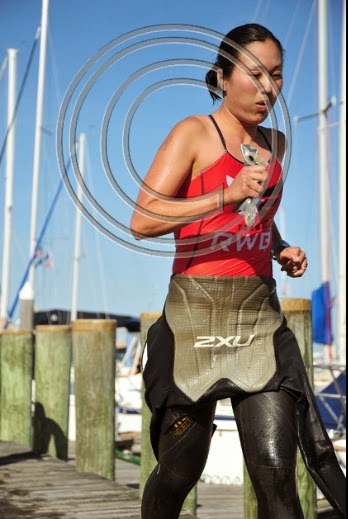 T1: Without being told, Kevin ran alongside me to transition and was very cute saying "Your foot's not in your shoe yet!" as I jumped on my bike with the shoes already clipped in the pedals. 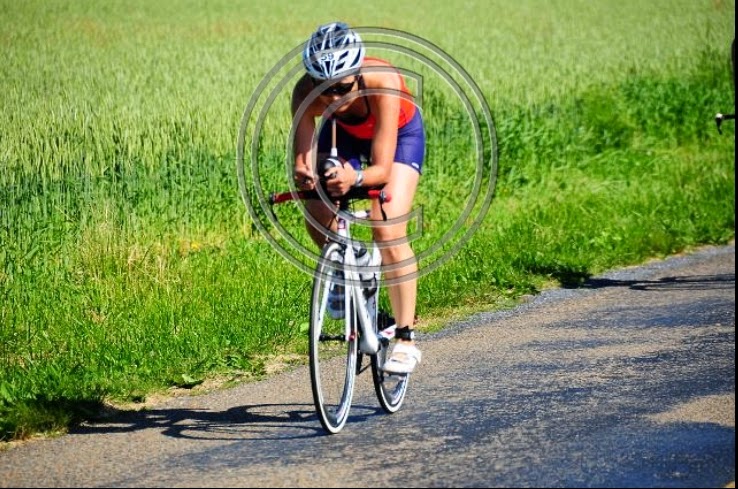 Onto the bike and again I went hard, but steady. I had opted not to wear my aero helmet the previous night, because I don't ever wear it except for racing, and find that I'm always fumbling with the straps and the visor/face shield thing. Well, and part of the bottom had broken off and I needed to glue it back together. Another thing I realized immediately is that I've lost my aggressive bike position. I had moved my handlebars all the way up with the three spacers underneath so that I could be comfortable for the 200+ Gulf Coast bike ride. Comfort over position! Too bad I should've picked the more aggressive position over comfort for the 40k bike ride at Rock Hall, as I was uncomfortably un-aero. I kept shifting around to try to get lower and felt like my seat was too low too. (FYI, all 3 spacers used to be above the bars when I had a much lower aggressive position.) I did swap my race wheels onto the bike, I think I could've done some more tweaking to get a more powerful and aero position. 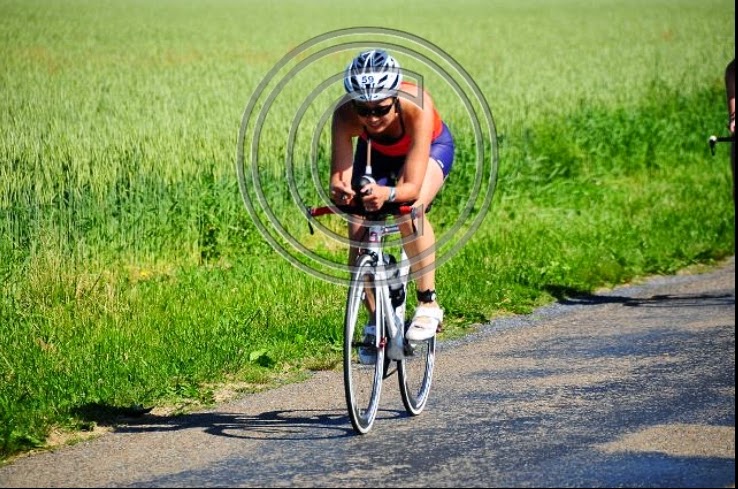 I knew I was in trouble when some of the 40+ women caught me in the first 5 miles of the bike. OUCH. It was a touch uphill with some headwind going out on the first half of the course, so I knew I would make up some time going downhill with a tailwind heading back. I did a negative split/negative effort (or is it positive effort?) bike ride and was happy to keep catching people on the way back. Some of those Sufferfest videos must've worked (I WILL BEAT MY ASS TODAY TO KICK YOURS TOMORROW!) or else just my inherently Quadzilla legs, because there were times I felt I was going no where, then dropped two gears lower and just mashed past people effortlessly. I did channel some inspiration from my amputee patients that I've been working with, particularly my buddy Will and his bike racing leg we've been tweaking.

T2: Kevin was waiting for me at the end of the bike and in transition again. He just hollered at me to hurry up, hurry up! Especially when I waved and yelled "Love you!" 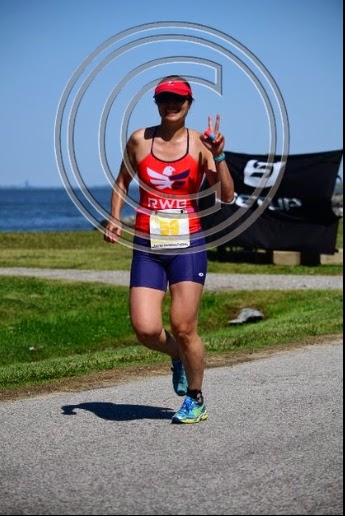 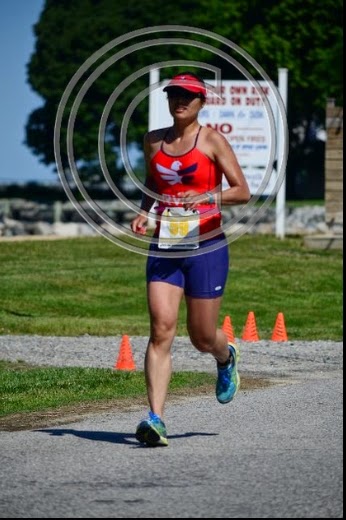 RUN: I ran out, focusing on turnover and going steady. Theme of the day: hard but steady. The run was two laps of 5k each. My first three mile splits were right around 7:20's and I chuckled to myself because I was confirming what I'd always known: my standalone run times aren't that much faster than my triathlon run splits. The second loop I told myself to run for those who couldn't, and again channeled some inspiration from some of the patients I work with, like Lisa, who are learning to run again. 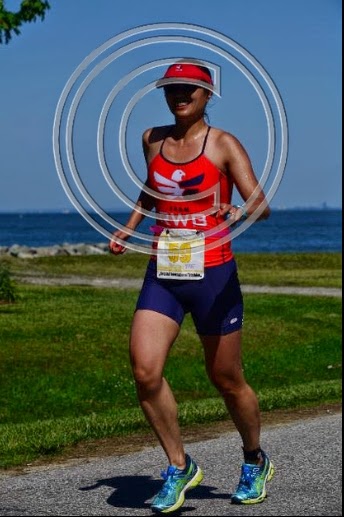 During the first loop I could see which women were in front of me and saw I was running them down. There were a good number of them who (no surprise) swam much faster than me. I kept catching women to the end and was happy to make that last turn towards the finish. I ended up 15th overall out of 195 women, 2nd in my age group. Not bad! I was beat by an 18yo and a 56yo. BWAHAHA. Good work, ladies. 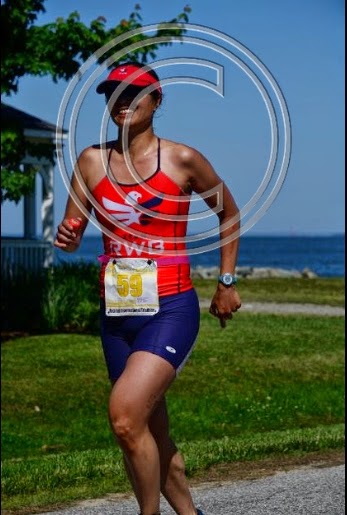 Overall, I feel like I did pretty awesome for only training for a month. Of course as an ex-pro, you are wired to go for the win and I haven't lost my habit of scoping out the previous year's race results. The pre-professional triathlete version of myself may have been happy with the result, but I think she would've trained more, and trained throughout winter. Or she would've skipped this race and been training for a half or full Ironman. In some ways, my old age grouper self (pre-TBB) seemed more hard-core than my current age grouper self. 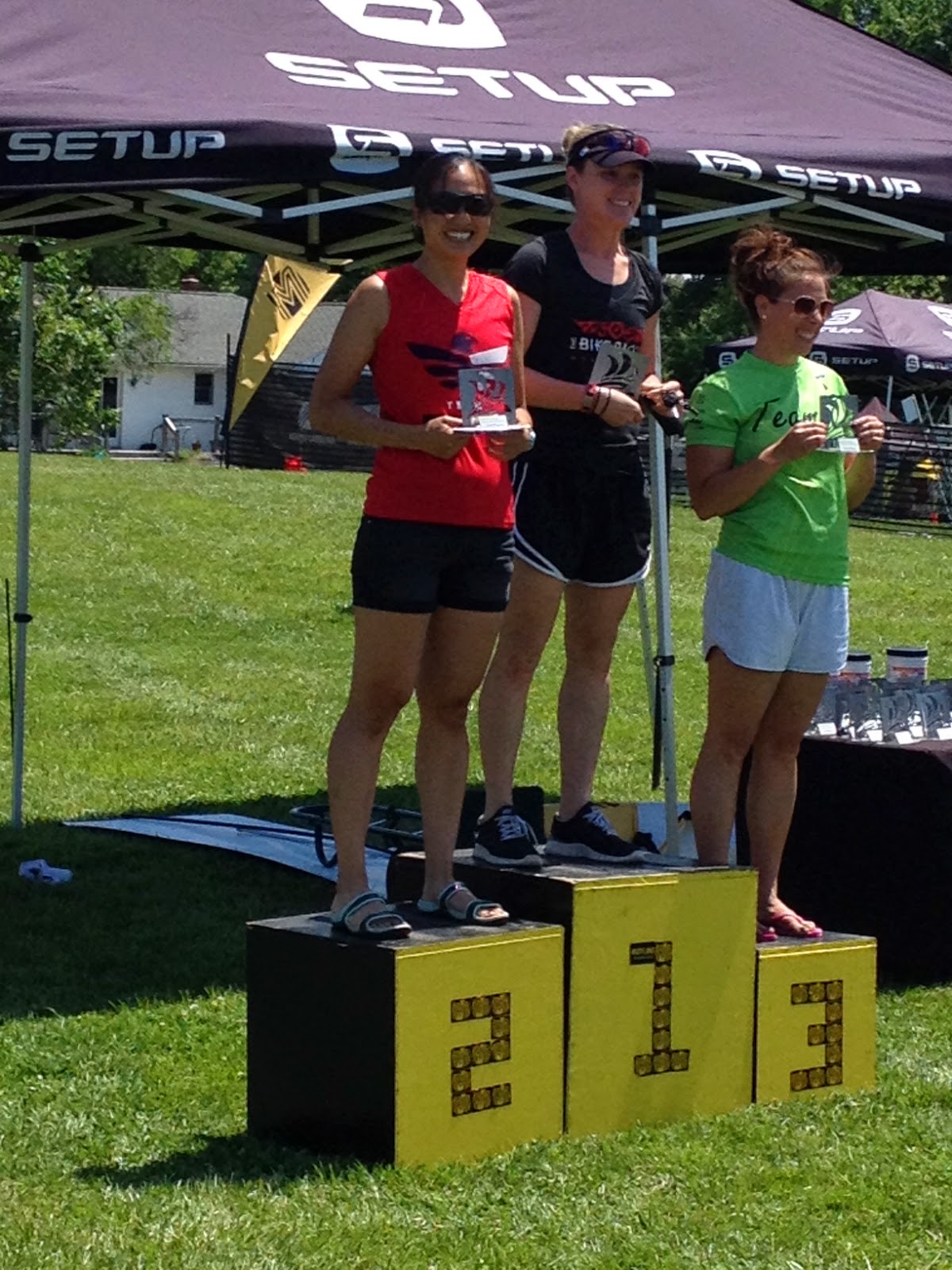 I can't deny how badly I swam when I saw that I was 62nd woman out of the water (!!!) and then moved all the way up to 15th woman overall. OUCH. Swimming will always be the most challenging leg of the three, and obviously I lose a lot of swim fitness when I barely swim at all. My bike was okay; the fitness was decent but I think I could've cut some minutes off with a more aggressive bike position and maybe an aero helmet. And the run cracks me up as I said earlier, I don't think I run much slower off the bike than I do in a standalone 10k. (I was only a minute and 20 slower than the 10k I raced 2 weeks prior.) Which means I need get faster at standalone running, which is my current project. :)

This race also reiterates that I was never one of those inherently talented folks that could just enter a race and win it just like that. Every awesome result I had when I was a pro was from working my ass off day after day, for years. I guess it gives me a better appreciation for how fast I used to be, and how hard I used to work for it. One day I might get fired up to do more triathlon training, but in the meantime, I'm happy to do my one tri per year and do just enough to not totally embarrass myself.

I originally signed up for this race on December 31 (before the price went up, of course). I had good intentions to train lots, get a slot to Nationals in August, and get top 18 in my age group to secure a spot to the ITU World Championships the next year, which would be in Chicago. Well, I could go to Nationals in August with this result, but I'm not feeling it. To be honest, I'm not particularly motivated to train enough in all three sports to not embarrass myself at Nationals. I remember the reason I migrated to the half and full ironmans--you can come out of the water 10 minutes behind and make it up on the bike and run. Closing that swim gap for the Olympic distance would mean a ton more swim training. Not feeling it!

My competitive fire is coming back though, and I'm channeling it all towards running now.

Finally, I'd like to thank my Kevin for being the most supportive guy and my biggest fan, my Team RWB family who make training together fun again, and the patients at work that inspire me every day. Y'all are awesome! And cheers to my 15th season as a triathlete! 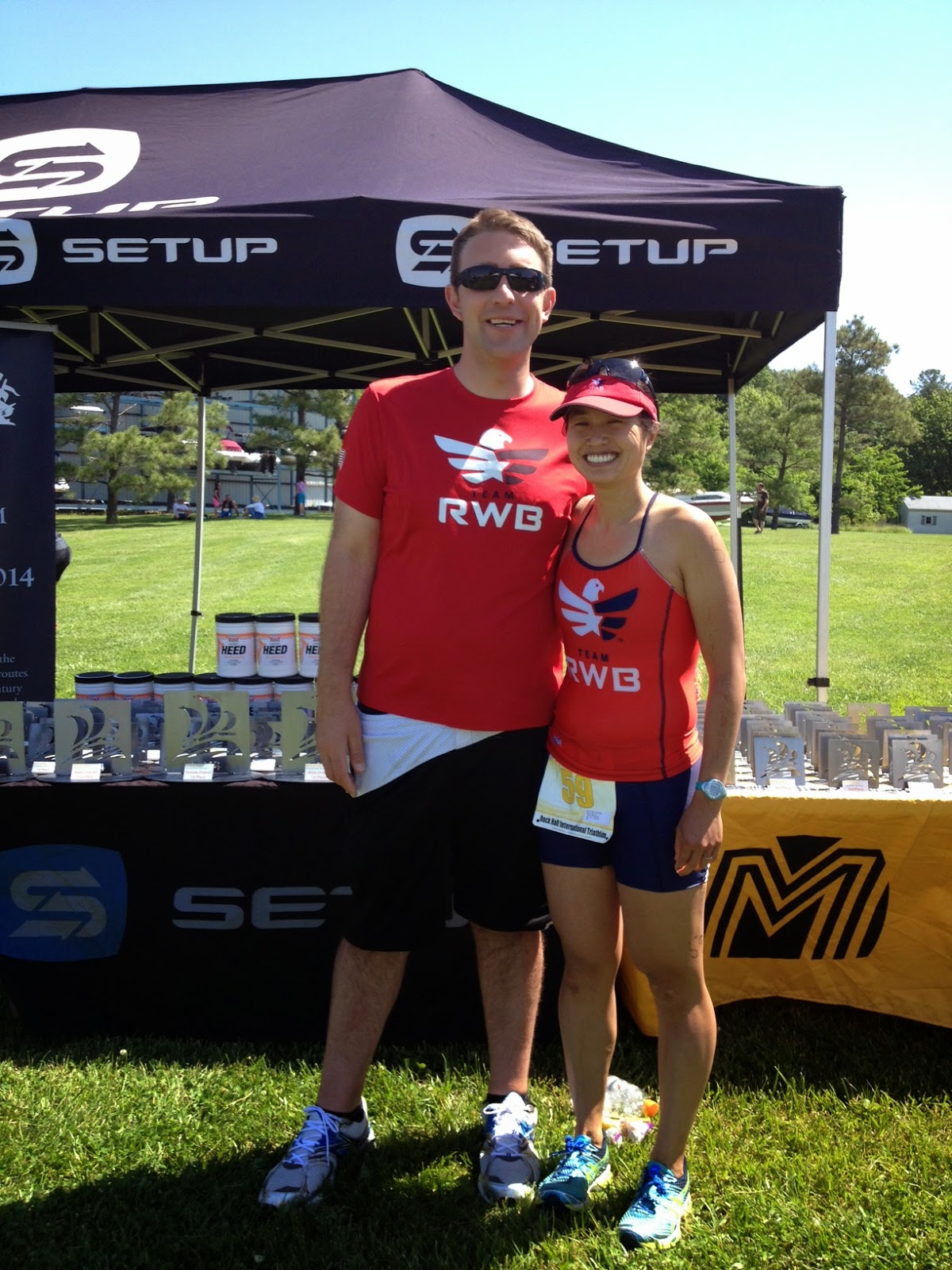