In a complete 180 from my previous post earlier this month, I signed up for my one triathlon of the season--the Olympic distance edition of the Half Full triathlon next Sunday. You know, I figure I've done at least one triathlon every year since 2000 (even 8 ironmans that one crazy year) and I'm not about to break what will be a 13-year streak.

My fears of aggravating the costochondritis were put to rest a few weeks ago when I did the 10k run portion of the Nation's Tri relay with one of my patients. After not running much for the 3 weeks prior, I still gutted out a 45:15 while keeping myself under the chest pain threshold. Not too shabby, and in the end, being around the triathlon environment and being a handler and relay partner for the challenged athlete division...well. I really have no excuse to not do a triathlon, do I?

A couple of the guys were featured in the Nation's Tri gallery on Triathlete Magazine's website. 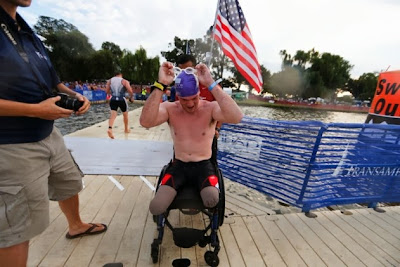 BTW, the guys did really well. There were about 10 amputees in the race, missing anywhere from one to three limbs. Some did the whole race on regular equipment, some rode handcycles on the bike portion and used push-rim wheelchairs for the run segment. All very motivating if you ever get a chance to watch these guys in action! We was also an amputee running clinic last week at Walter Reed with Heinrich Popow, who is a 2012 Paralympic gold medalist in the 100m for guys missing a leg above the knee. Really sweet and knowledgeable guy who helped inspire our patients and show them all kinds of running drills and skills. 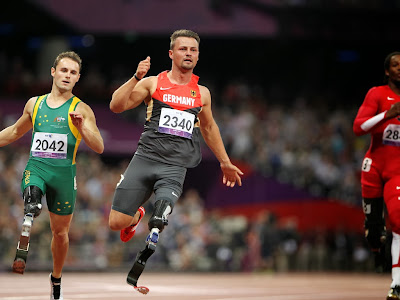 So through work stuff, I'm constantly pumped up and inspired, it's just a matter of making the time to train and staying healthy. Last weekend I did a 7-mile offroad running race on Coach Mac's (TBB bike shop owner) property, the Brandywine Bend race, which is age-handicapped and inspired by the Dipsea Trail race in San Francisco. It was awesome to see my old training partners from Delaware and have them kick my butt. I could definitely feel the costo when running up the big hills, but it was fun to dig up the high school cross country skills coming hard down the hills on dirt trails. 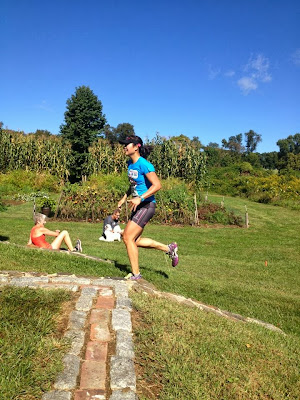 Right, staying healthy--I got my first flu shot in about 15 or so years last Monday at work, since it was mandatory for all Walter Reed employees (boo, hiss). I got the FluMist vaccine, which shoots live virus up your nose and is supposed to be more potent and effective than the dead virus they shoot into your arm. As fun as it was to say I had live virus shot up my nose, it wasn't fun to feel sub-par and yucky for several days. So much for my cram plan for the triathlon. I'm okay now with one week to go!

So now I'm trying to remember what it's like to race an Olympic distance triathlon. I don't believe I've done one since Wildflower in 2009. I did a couple sprint triathlons last year for kicks, and just went on Gatorade and had slow transitions. I don't think I even had elastic shoe laces. Heck, it's been nearly a year, so I'm trying to remember how to race triathlon, period. I got all kinds of last minute stuff, like elastic shoe laces, a new hydration system for the bike, new pedals and bar tape, and am beta testing the Team RWB triathlon kit. Chafage alert in the shorts! I may end up going with my trusty pair of favorite tri shorts from the teamTBB days--the ones I'm wearing in the race photo above.

All right, so a week to go... taper? What taper? A couple months of not doing too much thanks to the costochondritis, a couple hard running "races", then a week of laying low while battling the live virus up-the-nose, I sound like I'm full of excuses, don't I? I did get a chance to do some course recon on the original 32-mile bike course (they have since shortened it to 25 miles, no complaints here) and the 6.5-mile run course. So here's to hoping it's not too ugly!
Posted by Jocelyn Wong Neill at 11:02 PM