Soooo...I have a small dirty confession. I don't have an official half marathon PR, because the last time I jumped into one, I was a dirty, dirty race bandit. It was the San Francisco Half Marathon in August 2008. I even dug up the email I sent to my old coach, Brett Sutton, which was a month before I met him in person at my first TBB training camp:

Still gives me the heebie jeebies re-reading some of these old email exchanges. "exciting times ahead." !!! That's for sure!

Anyway, flashing forward 6 years, I haven't raced the half marathon distance since. As my bandited PR is apparently a "1:35", my goal for the Air Force Navy half marathon last weekend was to go sub-1:35.

My lead up to this race was pretty terrible. Last you heard from me, I did a 10-miler PR at Annapolis, then the weekend afterwards was "Lanco Labor Day"--race car camping with Kevin's friends whereabouts everybody came down with a cold during the weekend, and I caught it once we got home. Just sick enough to not work out very much, but not sick enough to stay home from work. I think I just did a short swim with Adam (a RWB triathlete newbie who needed to get in at least ONE swim before Nation's!), and then the RWB group run for Steve & Kerry's baby shower. Nothing else that week, other than running around the Nation's tri race course cheering for the noobs. The next week I was battling the inertia of the previous week. It's so easy to get out of routine and so hard to get back into it! 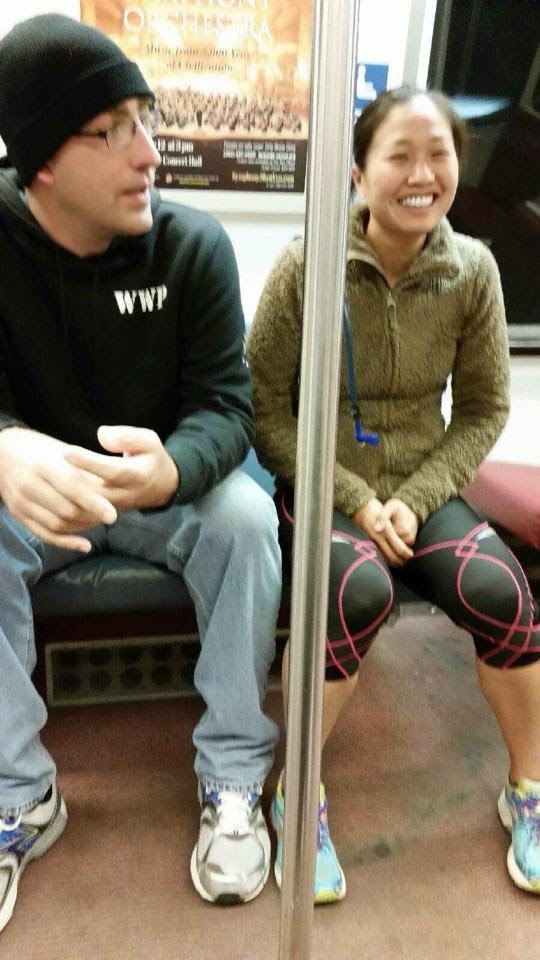 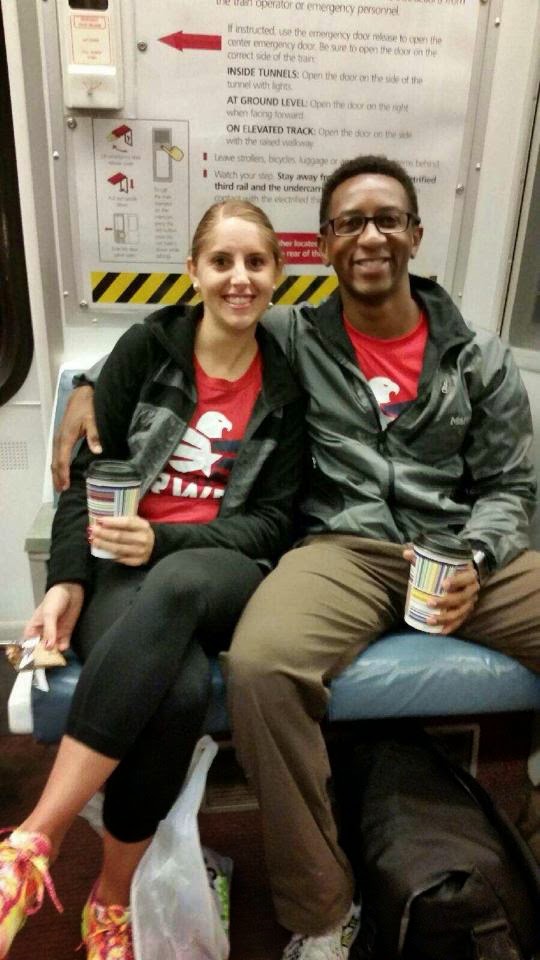 Still, I was going to go after 1:35. It's a 7:19 pace. We Metro'ed there in the morning with Carmen and Hiza. I was a bit skeeved out about getting to the race on time! The race started at 7:10am right on the Mall by Washington Monument, and the Metro was running earlier at 6am for the race (it usually starts at 7am on weekends). It got to Grosvenor station (our neighborhood) at 6:13am and we just got to the starting area with enough time to hop into the porta potty line (morning poops FTW) and then jump the barricades so I could get in by the sign that said "7:00-7:59".

I'm learning that the best thing to do at these big running races is to start off NOT right at the very front. If I have slower runners to wade through (but not too many!), it keeps me from going out too fast. So apparently it took me 44 seconds to get across the starting line, and I just told myself to go out sort of hard, but controlled. 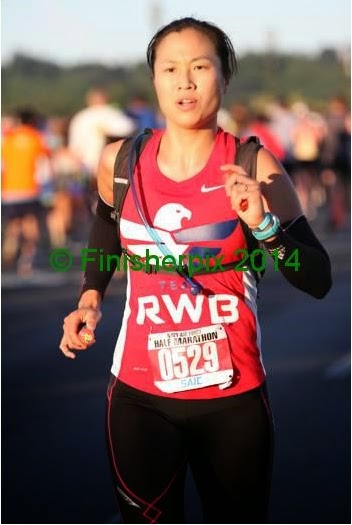 I decided to race with my Camelbak, as I'm very likely to race with it during my half ironman. I'm emulating my nutrition/hydration plan I used when I was racing Ironmans professionally, and even though some people thought it was very "un-pro" to race with a Camelbak, I always did well in the Ironman marathons that were in the extreme heat (China and Malaysia) and found the benefit of not relying on aid stations to carryover when I raced at other venues. Of course, these days I have to make sure that "hydration packs" are allowed in races, as they were temporarily banned following the craziness of the Boston Marathon bombings.

My game plan was to break down the race into 5k segments. 4 x 5k and then all out for the last mile! 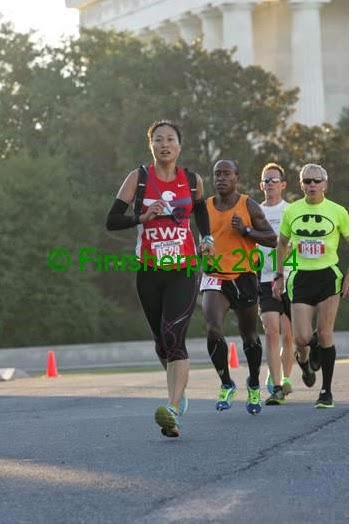 So here's how it went down: 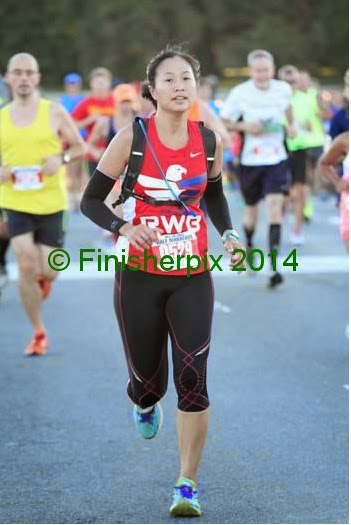 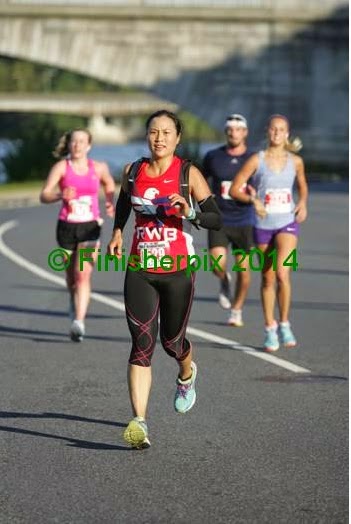 This was probably my first race longer than a 5k since I joined Team RWB over a year ago where there were a ton of RWB Eagles (we missed the photo op of course, no thanks, Metro!) and in the places the course looped onto itself it was really cool to cheer for people I knew and have people yell my name as well. 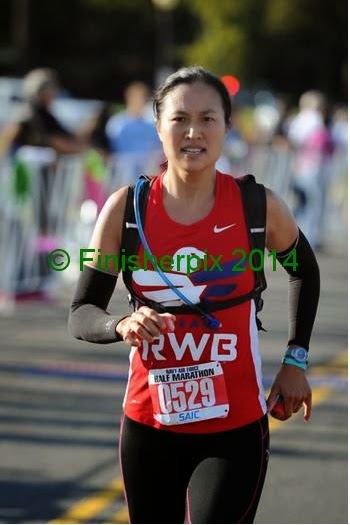 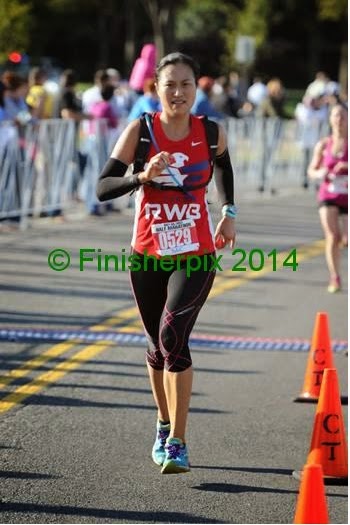 At this point in the race, I started feeling mentally and physically tapped. Seeing my 10-mile split (there was actually a timing mat) kind of tripped me out, as on one hand, I was kind of psyched I beat my 10-mile PR from a few weeks ago during a longer race, but may have mentally freaked out that I still had 3 miles to go! Yikes :( 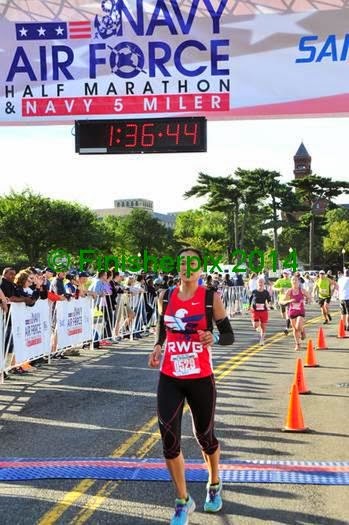 For a total of 1:36:00. Damn! Just one second and I would've been 1:35:something. Don't you love how my facial expressions throughout the race get more and more consternated??? 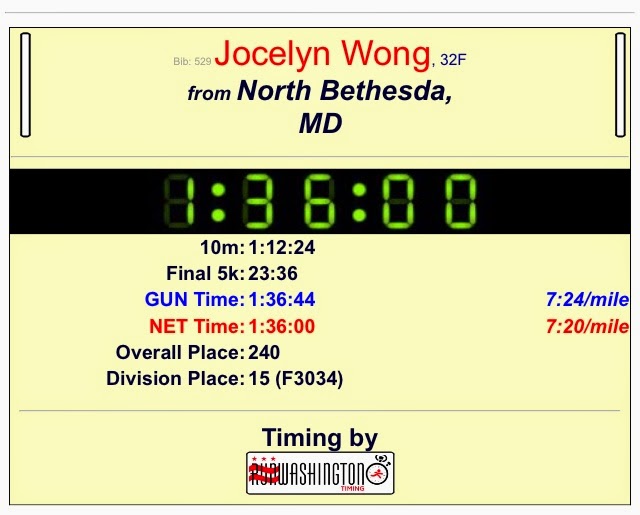 My lack of fitness the last couple weeks seemed to catch up with me those last 3 miles (and ok, the Red Badge of Courage had showed up the day before as well). I feel like I had just enough to get through 10 miles quickly but not quite enough for the full 13. Which is fine, as in another 2 weeks I have a chance to go after it again, at the Wine Glass Half Marathon! 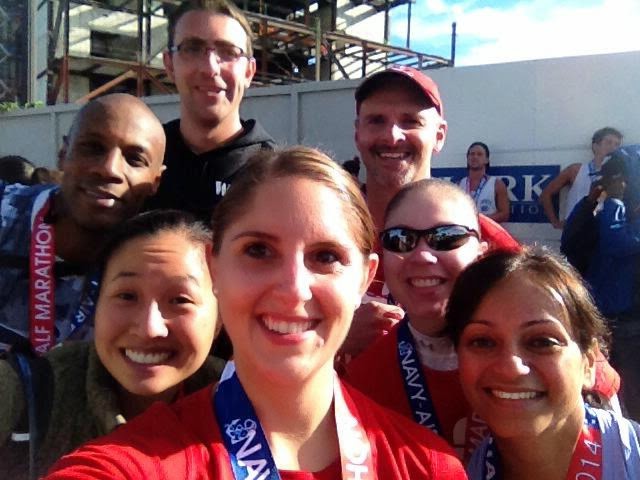 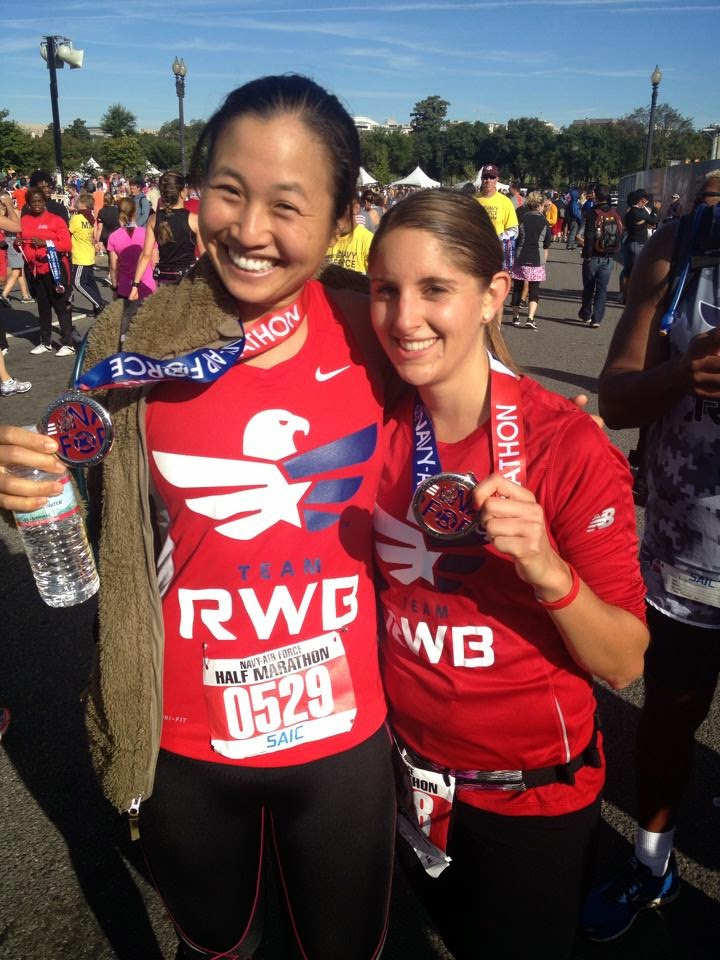 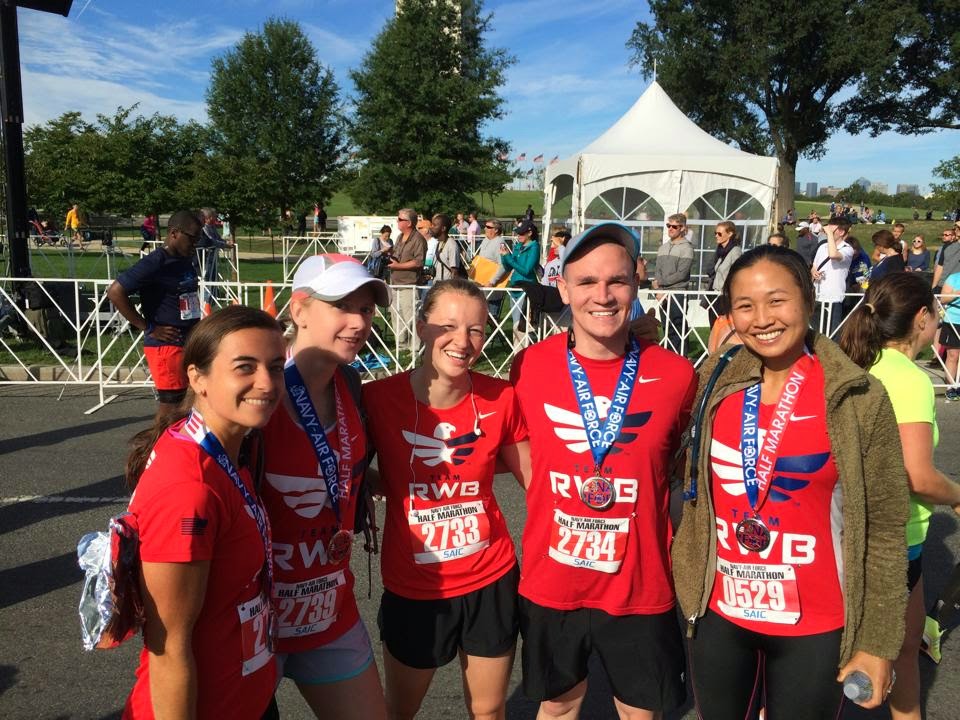 
In the meanwhile, we are looking at 5 weeks to go for this Beach2Battleship half ironman. Yipes. With a trip home to California thrown in later this week, as my little bro has popped out the first grand-offspring! There will be baby-cuddling, football watching, wedding dress shopping, and of course, our favorite, chillin' at the beach. Can't wait!