Let's talk about my Annapolis 10-miler before I forget! This was on the agenda back when I was focusing on a fast marathon at the Wineglass Marathon in October, along with the next road race, the Air Force Navy Half Marathon. These would be 6 and 3 weeks prior to the marathon, respectively, which I thought would be a great build-up. Of course, since then, I've gotten back into triathlon training, signed up for the B2B half ironman 3 weeks after Wineglass, and as of last weekend (phew!) was able to switch from the full marathon to the half marathon.

But I digress...the first reason I signed up was as prep for the Wineglass Marathon, but as soon I started the registration process, the REAL reason I signed up was that instead of a medal and/or t-shirt, you got a FINISHER'S JACKET WITH ZIP-OFF SLEEVES SO IT TURNS INTO A VEST!!! I could hardly contain my excitement and did what any respectable person with a jacket fetish would do...recruit more friends! 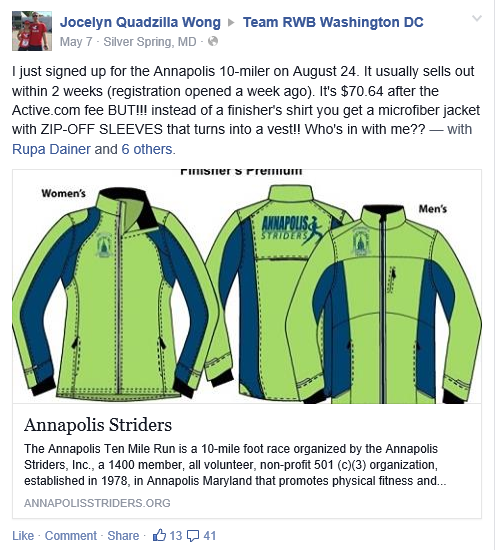 Within a few days (this was back in May...over 3 months before this race), we had over 25 RWB Eagles signed up so we could get this sweet jacket. Yes, I was the instigator. And let me tell you (spoiler alert!), the jacket did not disappoint. There was a specific women's version and THEY HAD THUMBHOLES!!!

But of course we had to run 10 miles first.

So as I write this, I'm trying to find my race report from my 10-miler PR, which would be the Turkey Burnoff 10 in Gaithersburg last Thanksgiving. Sorry, but I must've been on blogging hiatus then; all I can get you is the official results that peg me at 1:14:17 gun time. I also did the Army 10-miler a month prior to that at an easier clip, as you may recall my 2013 season was plagued with strange injuries, inconsistent training and general apathy. 10-milers seem to be a popular distance on the East Coast, as I don't recall ever racing these elsewhere. I was actually pretty shocked and impressed while running that Thanksgiving 10-miler last year at how fast I was going! I held a 7:26 pace and was hoping to hold 8's. It was also BUTT COLD.

All that said, I've been feeling much fitter than I did last Thanksgiving, so my goal was to break 1:10. 7:00 pace per mile. A bit ambitious, but I figured I was fat and slow last Thanksgiving, so I should go way faster right? Of course I'd already forgotten that it was just a little over TWO MONTHS AGO, I was just hoping to hold 7-minute pace for a 5k. Yeah. 3.1 miles. And I barely did it, averaging 6:56 at that Lockheed Martin 5k mid-June.

Then I averaged 6:49 at the Firecracker 5k on July 4th, and then 7:01 in my triathlon 10k just the weekend before Annapolis. So, um, obviously I could hold 7-minute pace for an open 10-miler, right?

Well, I didn't account for the hills. And when Nevie posted up the elevation profile on her blog, I was a little freaked out, then looked at the scale, and was kind of like "oh, don't worry the scale is only 120 feet!"

And because I am clever and nerdy with these computer things, I actually overlayed the two graphs:

I know! I'm such a nerd! But look how nicely they match up! It's amazing!

Amazing nerdyness aside, I guess I already gave the story away. I didn't average 7:00 miles. But if you still want the blow-by-blow, here's how it went down:

Mile 6. 7:27. Negative split my ass! There be more hills to climb! Wah, I think I ate too much for breakfast.

Mile 7. 7:54. Cramps?! What, c'mon, I haven't had running cramps since I was in high school! Totally ate too much for breakfast. Just jog super duper easy and let the cramps go away.


Mile 8. 7:25. Still another hill. Sigh. Did I just screw up my whole race because I ate too much and went out too fast?

Whew. So, I was kind of disappointed at first that I couldn't hold 7-minute pace, but was also happy I beat my PR by almost 2 minutes. On a much hillier course. And realized that another reason I run just as fast in triathlons is because I'm already warmed up and awake and don't eat so much prior to the run that I get stomach cramps.

My mild disappointment was short-lived as I picked up THAT SWEET FINISHER'S JACKET, caught up with running friends, and cheered on the other Eagles as they came through the finish! 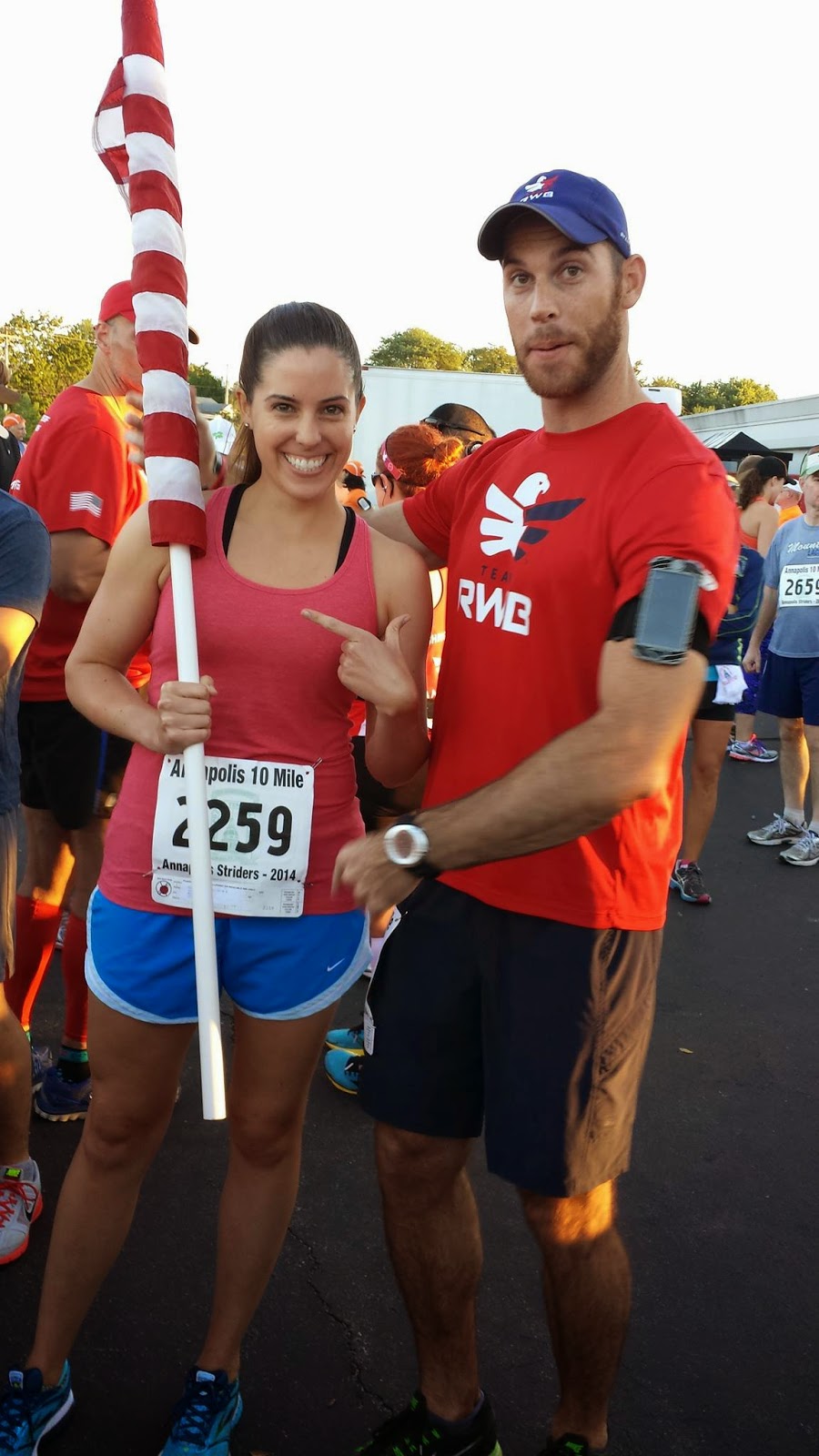 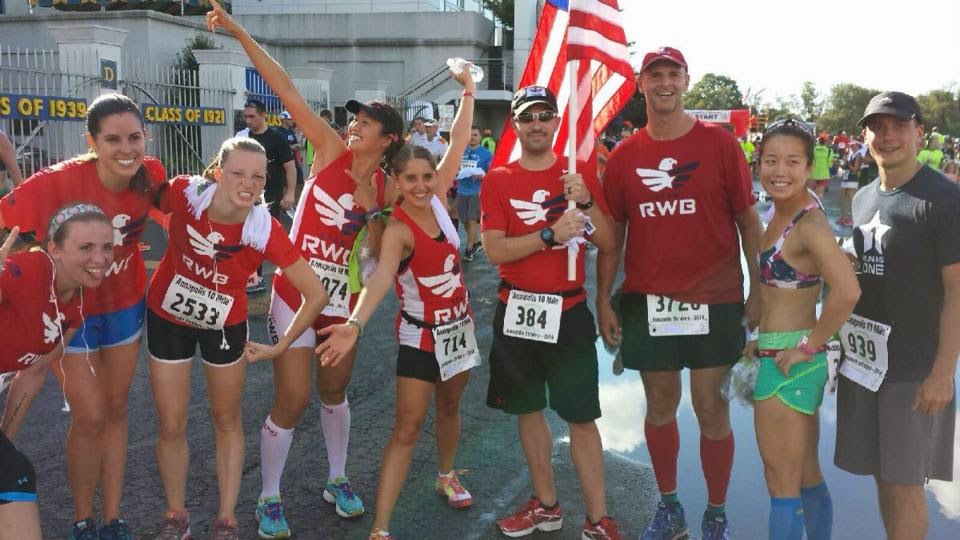 All in all, a great way to spend a Sunday morning! I was proud of our RWB showing in Annapolis as we had some first-time 10-miler finishers and others that PR'd. Whoop whoop!
Posted by Jocelyn Wong Neill at 7:25 AM