whispering the loudest and talking at the top of your lungs

Yesterday my favorite Hungarian/Canadian/Jewish fan (you know who you are) sent me a message saying, "we runners used to say that race walking is like seeing who can whisper the loudest."

Well, I told him that we Chinese people are well known for talking at the top of our lungs, but it's not considered screaming. (Just go into any Chinatown tea house. You just step in and there's this ROAR all around you.)

No coincidence, the best racewalkers in the world hail from Russia and CHINA. That's what Wikipedia tells me anyway, and everyone knows that Wikipedia is like the Magic Eight Ball and has all the answers to life's biggest questions. (42!) 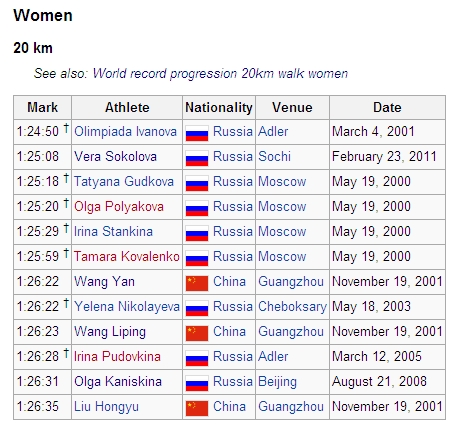 And check it out, the fastest two Chinese are Wang's. That's a close cousin to Wong, of course.

Clearly this is my destiny.

Even trippier, 3+ years ago, after Brett watched me run for the first time at teamTBB training camp in fall of 2008, he promptly instructed me to go on YouTube and watch racewalkers. I was supposed to run like a racewalker who was cheating. (They aren't allowed to have both feet off the ground at the same time.) The emphasis was on the heel strike, and high cadence.

Another year later, we were at the training camp in Jeju, South Korea, where it seems many significant events in my life have taken place (spooky?), and we trained on the same track as the national team's racewalking unit. I actually blogged about it in my little spoof "Making the Grade at Sutto's Triathlon Academy." They were really quite amazing to watch, one guy was walking circles around some of our guys!

This was the first time I really did my racewalking "homework," and learned through my Google research that Chinese girls can indeed have six-pack abs. The Abzilla pictured above is the 3rd fastest girl on the all-time list, Liu Hongyu, who took 4th in the last Olympics and got 2nd last year at the world championships. (If you watched the video I posted up on Monday, you will recognize her as 2nd across the line. But yeah, I know, we all look the same, eh?)

Back then (2+ years ago), I believed that if I ate "right" (inadvertently starving myself) and kept up the ridiculous hours of Ironman training, those six-pack abs would be mine. Wrong! I will have to racewalk like a maniac to get them!

Anyway, other than getting distracted once again by the awesomeness that is racewalkers' abdominal muscles, I think I meant to say that Chinese people are really good at two things:

Therefore: because I'm full-blooded Chinese, then: I should be really good at this new sport too. Right.

In similar news, I had Lesson #2 today and it went well! I am holding my form even when increasing speed. This first month is all about getting the technique down. Details next time!
Posted by Jocelyn Wong Neill at 9:50 PM