I was out Christmas shopping after work today and some Tiggers caught my eye... 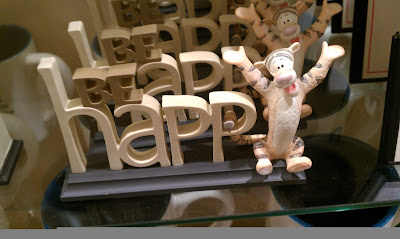 It was then I realized I haven't felt like an Eeyore for over two weeks now.

And that's a good thing. A happy feeling, literally.

I was grouchy right after the bike crash when I couldn't train. When I got better, I was frustrated I couldn't do very much training while trying to work a full-time job again. I was so upset that I was getting fat and out of shape. When I was able to manage my time better, I was miserable that some days I didn't feel like training anyway. I fluctuated between not wanting to train, and mad at my body for not being 100% healed. Then I was sad that I didn't enjoy training any more. I got depressed realizing that triathlon was no longer fun, and that I didn't want to do it any more. Then I got more sad at the thought of never doing triathlon again.

I know that there are some people out there who are disappointed in my decision to walk away from triathlon, but I ultimately realized that if I kept doing something that made me such a miserable, negative, dark & twisty Eeyore, the person who would be most disappointed would be... myself.

I haven't randomly felt like crying or bursting into tears for over 2 weeks now. FINALLY.

In related news, I watched the Winnie the Pooh movie in the theater with my friend Steph when it first came out over the summer. We were the only "big kids" in the audience...meaning, sure there were people our age there, but they brought their kids. I highly recommend it if you are ever feeling like an Eeyore. It is the most fun and hilarious movie ever! I vowed to buy the DVD when it came out and to watch it whenever I needed cheering up. Sherpa got me it for my birthday. But I haven't felt like an Eeyore since then!
Posted by Jocelyn Wong Neill at 9:10 PM