My knee is getting better! And my first swim was awesome! Even though working in the field of prosthetics and orthotics makes me appreciate the ability to swim, bike & run more than most people, having these crash injuries multiplies that much much more! I won't be taking those abilities for granted any time soon.

I saw Dr. Jannelli, my "body mechanic," on Weds and he pushed my medial meniscus back in its place. It's already feeling loads better. (Pun intended! bwaha!) He thinks it just shifted and isn't torn or something awful. We're also playing with some kinesiotape. Range of motion with weight bearing is coming back, slowly but surely!

He always has a container of little dark chocolates at the reception desk which also makes my body feel better! Sometimes they (the chocolates) even tell you motivational messages. :D 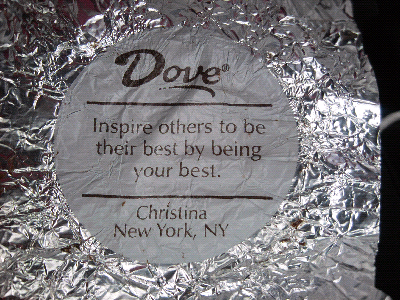 As for cycling, I thought the indoor biking was over when the snow melted, but I am back at it and making good use of my Delaware library card. Now that I've been a member over 6 months, I have full grown-up privileges, which means I can borrow up to 10 DVD's at a time instead of just 3 (the peewee membership). I started watching the Sarah Connor Chronicles with Summer Glau as a good-guy Terminator. Ever since Firefly, I'll watch anything with Summer Glau. Dude, she's super hot and kicks major ass!!! 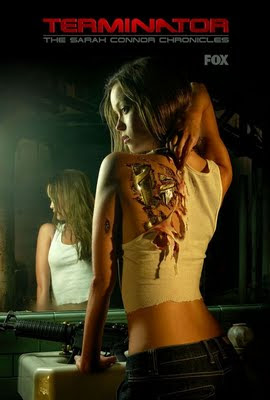