I remember my former teammate Brandon always saying that you could always tell when pro athletes get injured or were having a bad season, because they go off the grid on their blogs and Facebook and stuff. But I like to blog and have been told by some fans that they will actually check my blog every day for an update (!!!) so that's encouraging. People want to stay posted on how I am doing with the crash recovery, plus, almost everyone can relate to being injured. So I figure I can write some of my tips on how to stay motivated when you have to do something boring like...water running!

I'm still not running on ground yet but Coach Beck has me putting on a pair of old running shoes and running in waist-deep water. 30mins isn't too bad to tolerate but today's session calls for a whole hour, and there is only so much back and forth you can do (most pools are 25 yards here and only go about halfway, 12-15 yards before the big deep end drop-off) before you get super bored.  I love running to music, especially when I'm unmotivated, but was afraid of dropping one of my ipods into the water (I have the latest generation ipod shuffle and the new ipod nano I won from that photo contest...). 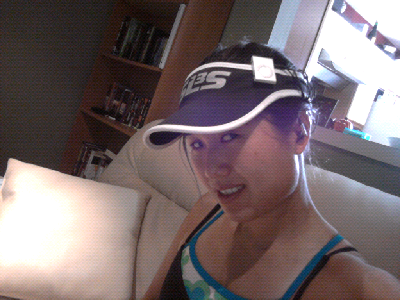 Sherpa came to the rescue and said I could use his old archaic ipod shuffle, which is 5 years old. Apparently he's loaded or something because he said "well it's only $50 if you drop it in the water." Hmm I think I picked a good one! ;) So I clipped it onto my new SLS3 visor (stylish isn't it?!) and wrapped the cords around the headband-ish part. Should be well above the water! We'll see. I forgot that the Y doesn't open until 10am on Sundays. No actually, I forgot it was Sunday. I thought it was still Saturday. Wishful thinking heh heh!

This is also the outdoor pool, and to make water running more enjoyable I look at this as an opportunity to even out the discrepancy in skin tone between my torso and my arms. So I'll throw on a two-piece swimsuit and work on my tan!


Because the Wongstar is all about the power of positive thinking, and she can find a positive side to everything!
Posted by Jocelyn Wong Neill at 8:59 AM