If you have been a longtime follower of this blog (or any of my previous blogs), you may be familiar with my annual adventures with my best friend Amy. Together we are #TeamFatKidz, dubbed by Kevin who was our one-man support crew during our first ultra. I think we started doing these after I retired from being a pro. In August 2012 we did Ironman Louisville (my first as a post-pro age grouper), March 2013 was the Graveyard 100k ultramarathon, and last spring, April 2014, we did the Gulf Coast Interstate Relay 200+ mile bike ride. In the solo division but together. (We DNF'ed at mile 180-something.)

Well, we kept pushing the envelope on stupid ultra-long adventures (GCI I feel was her way of exacting revenge since Graveyard was MY idea), and I realized that it wasn't fair to sign up for these early season adventures (meant to "motivate me to train" over winter...yeah right) when I lived in the chilly Northeast (Mid-Atlantic, close enough), and she lives in "winter? what's that?" Texas. Inevitably, I'd show up fat and undertrained, get my ass kicked and then be motivated for the rest of the year. 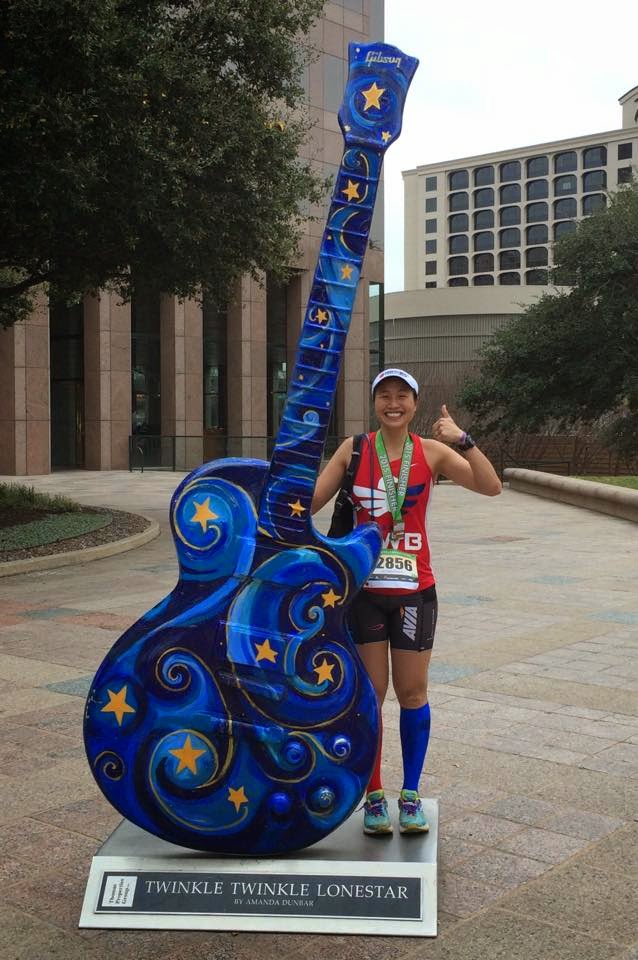 This year would be no different! It was my idea to go visit her for the Austin Half Marathon. Mid-February, no big deal. It would be WARM! (Race day temps were actually 55-59*F compared to single digits and snowing back home.) And only a 13.1-mile run, way less than 60 miles of running or 200-ish miles of cycling, right?! 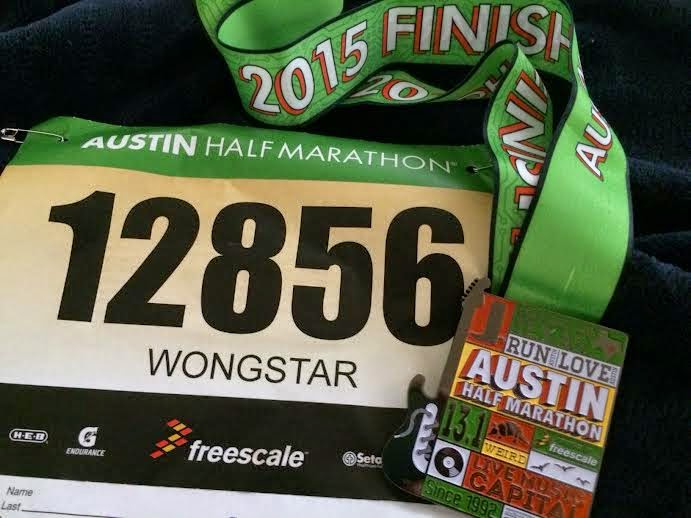 So in the good ol' Bucket of Excuses, I had the usual suspects: the cold DC winter, hibernating like a bear, etc., and also got to throw in the "switching jobs, about to move" stress of the last 2 months. Sometimes I think I really gotta train more during winter, but on the other hand, I've really taken to the "hey! I'm not a pro anymore, so I can stop taking myself so seriously!" mentality of off-season. I just know to adjust my expectations and remind myself to see the forest for the trees--my goal is to be fit for summer and fall racing. A slow start to the year is ok!

And hey, slow it was! I aimed to start the run with Amy and hang on as long as I could. She had just run a 1:35 at 3M (another Austin half marathon just 3 weeks prior), which is flat and net downhill, so her plan was to run the first half with the 1:40 pace group and then negative split for a 1:38 or faster, since this course is known to be tough and hillier.

Only, there wasn't a 1:40 pace group. The race was held in conjunction with the full Austin Marathon, and there was a 3:25 pace group. Only also, it didn't matter that there any pace groups, because we both needed to do the morning poo thing and couldn't find the race Porta Potties. We ended up lining up for 2 of them (which obviously weren't race-issued as they were DISGUSTING), and missed the gun start. But no biggie, we figured it was chip timed anyway... (I was unsuccessful with the #2 execution. It was too gross in there. I just couldn't! Boo!)

So we ended up jumping into the super crowded race and crossed over the start line about 4 minutes after the actual start. Man, what a mess. We were weaving around all the slower runners and it was really difficult to get going. Our first two miles were 8:13, 8:10--oh, you know what? That's according to my Garmin watch...and we were weaving around people so much, the watch would chirp before we hit the official mile marks, which meant we were actually going slower than that! 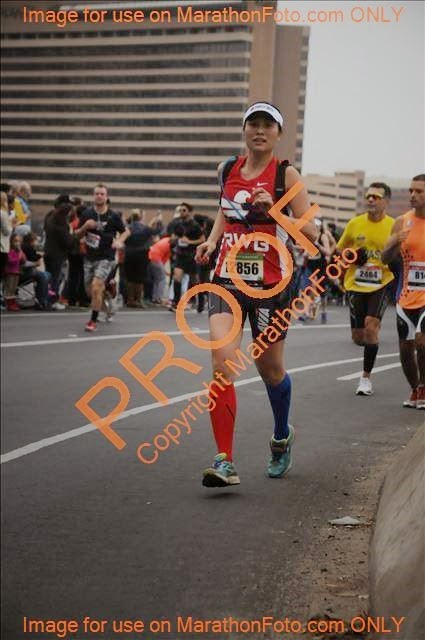 It was a huge race (I think 4,000-5,000 marathoners and 9,000 or more half-marathoners), and the marathoners didn't split off til after mile 10. So it was fairly crowded the entire way. We hit a nice downhill stretch and finally got under 8-minute pace. After mile 4, I told Amy to go ahead, as I was already feeling winded. We were already clocking sub-7:30's and I could tell she could go even quicker, while I didn't think I could go any faster without blowing up the next 9 miles. 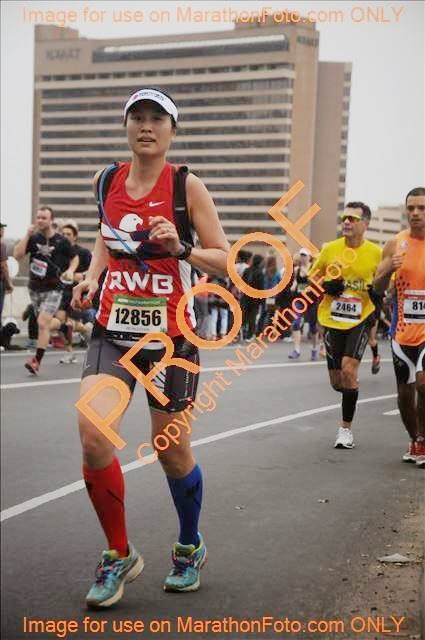 There were a lot of fun and motivational signs, making fun of the Seahawks, channeling Christopher Walken, and the #besomebody campaign was really cool too. 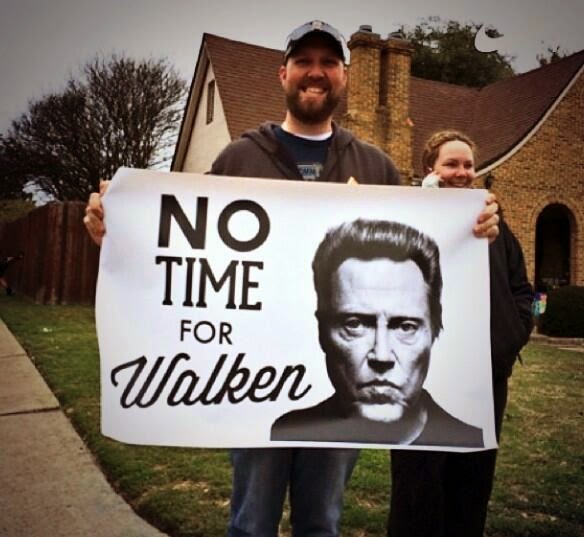 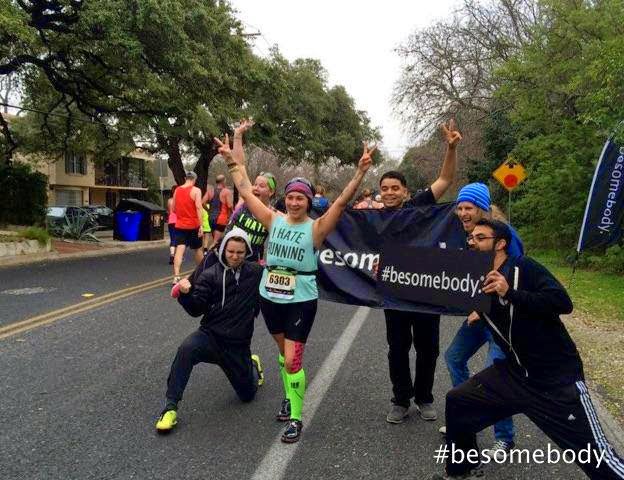 I also saw lots of Team RWB runners from local Texas chapters, so it was very cool running in the same uniform and cheering each other along the way.

Miles 12 and 13 (7:24 and 7:47), I managed to kick it in some, even with the evil hills on the back end of the course, and even though I felt like the second half of my pacing sucked, somehow I still was making negative splits according to my official results. ?!? 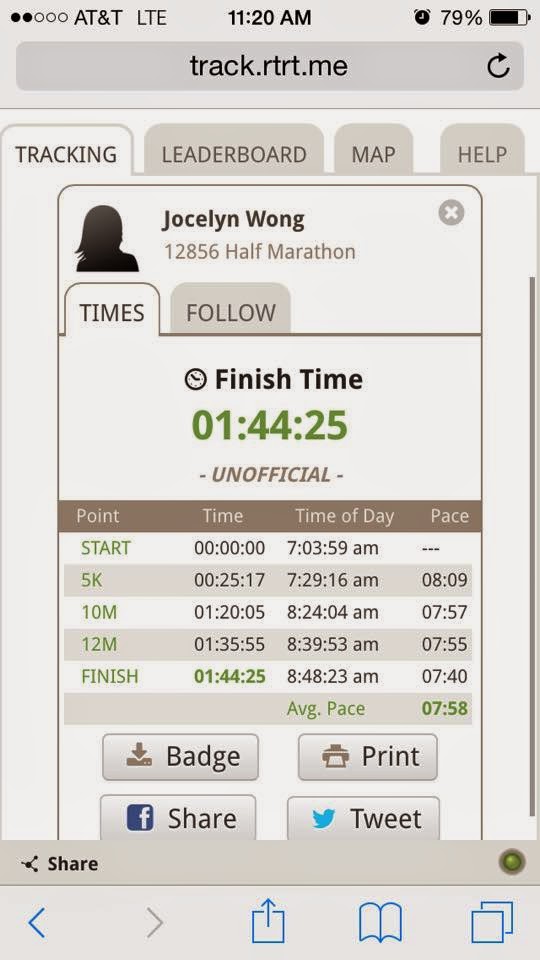 Actually, no, I just realized I did NOT negative split...because the only splits in the official results are at 5k, 10 miles, 12 miles, and the finish. D'oh! Boo, crap. 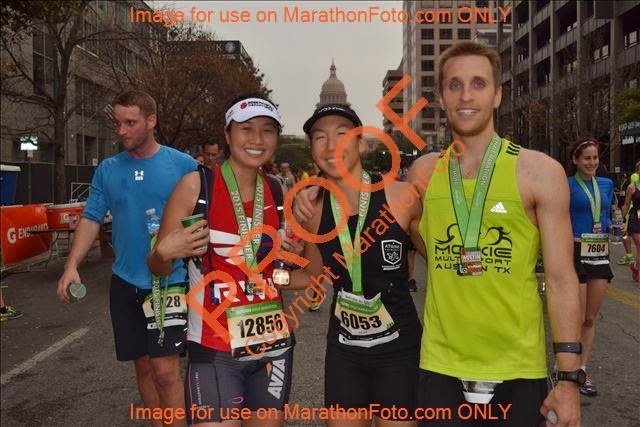 Anyway, I was happy Amy and her boy both had great races, both 1:38-ish even though we started 4 minutes apart. Of course I would've liked to go faster, but if I remind myself where I was a year ago, I wasn't even running much, and my first race would be a 10k in 3 months' time (the St. Michael's 10k in mid-May).

We got a medal that I believe functions as a bottle opener as well! 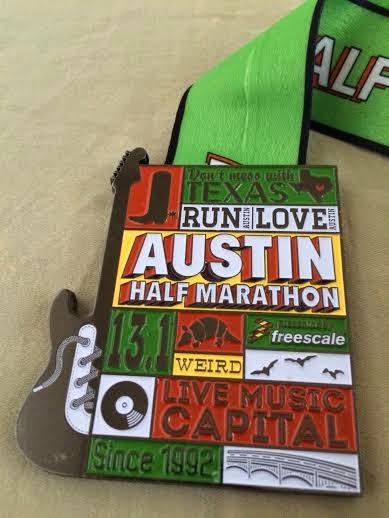 And let's not forget the other reason for this trip! Doing some wedding planning (at home we've just been so busy with work and moving, so it has been procrastinated on)...

And in true #TeamFatKidz fashion, Amy was sure to fatten me up extra as we had an all-weekend eating extravaganza... Whole Foods, Thai, all-you-can-eat brunch buffet with mimosas (!!!).

I was super pumped (haha, pun intended) to stay with a couple of uber trigeeks, as Mike let me try out his Normatec space boots for recovery... 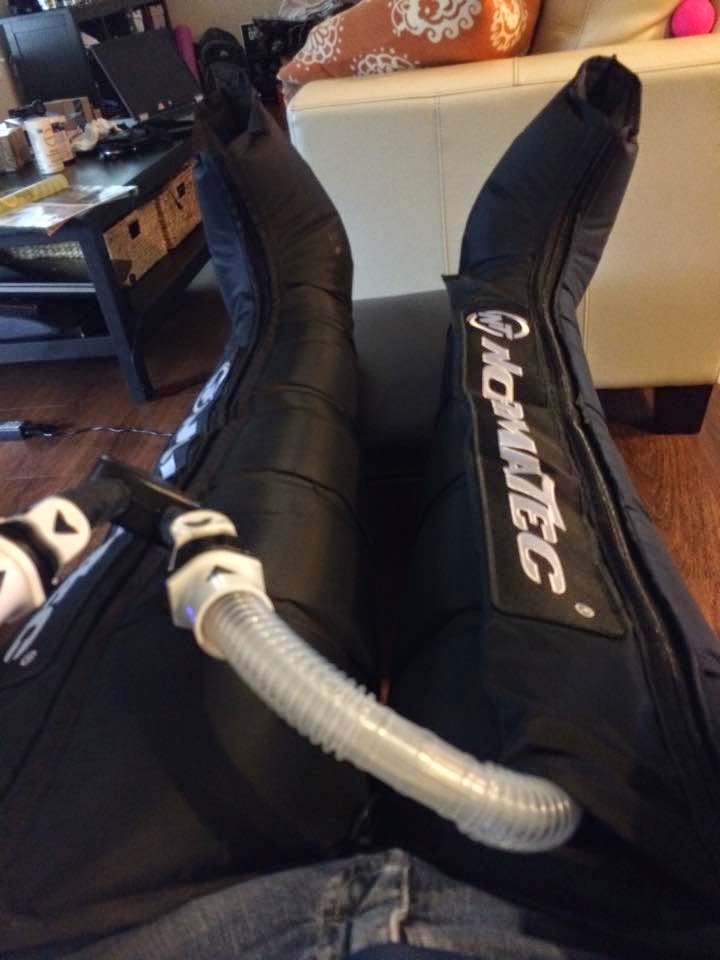 I also got the chance to catch up with a lot of my old triathlete friends who knew me when we were all blogging on LiveJournal and from "before I was famous"--the travel sponsor Mark, my buddies the Weathershenkers--and also the Paks (Bliss and Minsok), who I had met when they were living in Singapore and huge supporters of TBB. I met their daughter Hanna back when she was 8 and I had hot pink hair, and now she is 14 and about to learn to drive. WHOA!

Overall, a great weekend with old friends. They always have a way of reminding me of who I was way back when, and what I'm capable of doing if only I put my mind to it. So super motivated in February already! It was a nice early season fitness test to remind me that it is time to stop hibernating, even though I flew back in time for a snowstorm!
Posted by Jocelyn Wong Neill at 11:37 PM