In case you missed them:
Part 1: A Birth Story of Epic Proportions
Part 2: 22 Jabs of the Spine!
So the spinal block is finally in... actually, I forgot to mention that not only was it extremely painful (I was legit sobbing in pain), it was even more stressful because I knew that if they couldn’t get the spinal block in, they would have to put me under general anesthesia to “give birth”! No way was I letting that happen!
But the needle was at last placed. The spinal block was finally in, and suddenly it was back to BOOM BOOM BOOM let’s GO GO GO!
They stuck a catheter in me (ew). I also got my arms strapped to either side of me, like Jesus on the cross (Kevin’s description, and not inaccurate). They must have a history of moms trying to escape the OR while they are half temporarily paralyzed and being cut open, right?!
Kevin is finally allowed into the room and he is whiter than a ghost. He looks like he is about to simultaneously throw up, pass out, and run away. Luckily we had amazing nurses to comfort us!
I don’t remember who told me that C-sections are really fast, and why I was naive enough to think that our scenario would be anything like anyone else’s story. It seemed like it took forever; I was told “you might feel just a little pressure”, there was a lot of extremely barbaric yanking and pulling, and finally we heard our baby crying. At 8:37am, they pulled out this giant baby covered in waxy stuff and raised her up like Simba in the Lion King over the blue curtain so we could see her. 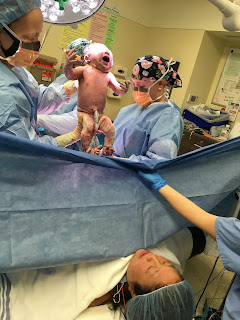 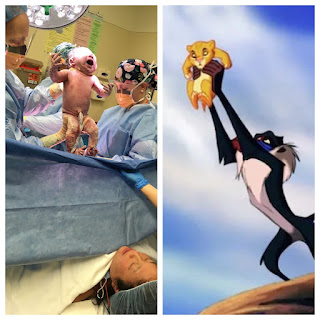 Kevin suddenly stood up, looked me in the eye and said “I love you but I GOTTA GO” and it seemed that everyone in the room yelled at him to sit down. He later told me he suddenly felt sick from seeing all the horrible expressions on my face and he wanted to run out of the room in case he threw up. Meanwhile I was thinking—this is your gut reaction to our baby being born, to run away?!

So as tall as he is, all the doctors and nurses knew he would be able to see over the curtain at my GUTS AND STUFF, and especially if he headed out the doorway, since he would have to walk right by my GUTS AND STUFF going that direction. And we all already knew he was squeamish. Hence why they all yelled at him to sit back down. 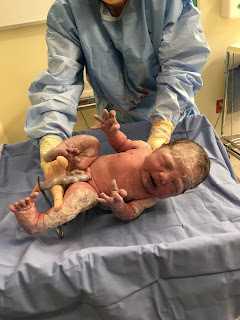 It was surreal hearing this little human crying and crying. I couldn’t believe she was just inside of me. They took her to the warming area and to do all their measurements, and meanwhile the surgery felt more and more uncomfortable...I wouldn’t say I was in pain, because you’re not supposed to feel pain, but I felt a very high level of discomfort.
I have a great women's health/pelvic floor physical therapist, Anne Duch, who I worked with both pre- and postpartum, and she had trained me well to prepare for an epidural-free vaginal birth. Obviously we had a plot twist in this story, but I was actually able to utilize all the deep breathing I had practiced  while laying on the operating table! To manage the extreme discomfort of being put back together like Humpty Dumpty, I watched my heart rate on the monitor and took deep breaths. My HR was in the mid-40’s and I hadn’t seen it that low since before I got pregnant. (My normal non-pregnant resting heart rate.)
I remember my “birth preferences list” said I wanted skin-to-skin with my baby ASAP, and the other OB said that is always the plan, unless the mom is not feeling well and wouldn’t be able to hold onto the baby safely. Of course I didn’t remember that at the time, I was just really impatient and anxious to hold my baby that had been inside of me and a part of me for 9 whole months.
What the heck was taking so long?!
Later, I was able to look up our surgery notes in my hospital patient portal and here is a fun snippet:
“The placenta was expressed. An attempt was made to exteriorize the uterus; however, this was unsuccessful. The decision was made to repair the hysterotomy while the uterus was within the abdomen.”
So apparently normal uterus repairs involve repairing it outside the body? WHAAAT? And my uterus was so big they couldn’t “exteriorize” it. WOOOOOOOW. She also was so big they needed to use the vacuum to pull her out. Which I did NOT realize they did in C-sections. My scar is only like 4.5 inches long and I’m still surprised that such a giant baby came out.
Right before they weighed her, they asked me how much I thought she was. I stuck with the 12 pounds I had graphed out! But she was a mere 11 pounds, 6 ounces. I’m convinced she would’ve hit 12 and came a week after my due date if we let her chill like she wanted to. Then I heard “Oh my god!” And the nurse laughed and exclaimed “24 inches!” Which apparently is Dr. Smith’s record for the longest baby she’s ever delivered. 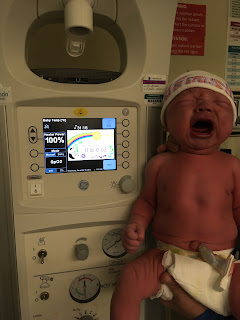 It felt like forever, and was in fact a long 30 minutes--I was able to look back at all the time stamps from our photos. That UD nursing student had my phone and he did good! At 9:09am, I finally got little Ainsley on my chest for skin-to-skin contact. I then cried for the third time that morning!

To summarize, in a few short hours, I experienced:

She was so big, yet so little. She looked just like her ultrasound images, but not creepy. 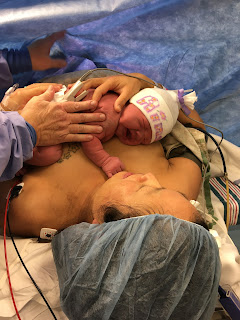 This was the creature that had been jumping up and down on my bladder, kicking my ribs, and craving all sorts of both weird and delicious food... 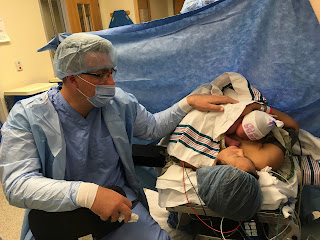 Kevin couldn’t believe how beautiful she was (and still is! More beautiful each and every day). 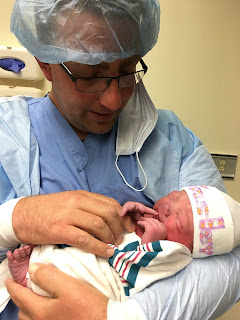 He was really convinced she was going to come out looking like a creepy alien. 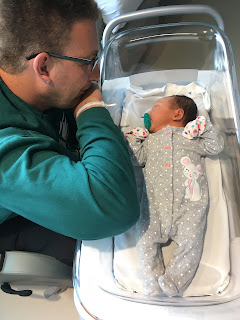 And that concludes Ainsley Jade’s big entrance into the world! A wild journey full of unexpected feelings, twists, and turns, but above all, immense love and gratitude for our little big one and the amazing team of doctors and nurses for getting her out of me safely.

She was longer than a Capriotti's large sandwich! Of course we had to do a side-by-side comparison. 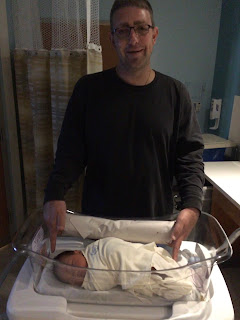 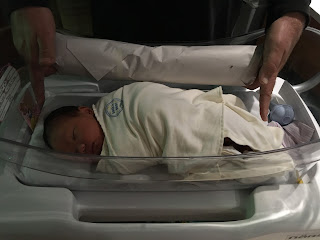 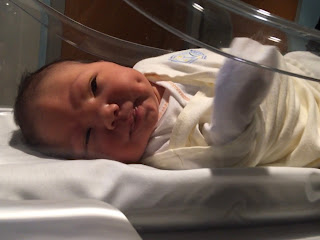 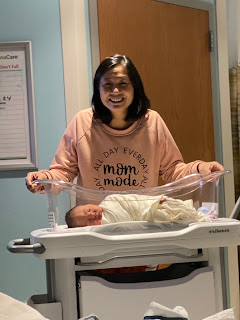 I also wanted to give a shoutout to all the Cesarean birth mamas, both planned and unplanned: they slice and dice through 7 layers of tissue (like a 7-layer burrito!), so don't let anyone tell you that it's the "easy way out". You are amazing! Take your time getting active again, and your body will thank you!
Posted by Jocelyn Wong Neill at 5:32 PM