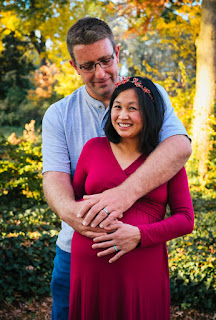 Scheduling your birth is actually pretty darn convenient. You know when exactly you need to go to the hospital, you've got your bags packed (so many snacks!), and you know it'll be your own doctor that you've been working with who is delivering your baby. Not some rando!
I even gave Aero one last bath the night before. She wasn't going to be the only child for much longer, and we didn't want her being stinky meeting her baby sister. We had a 5am check-in for our 7am surgery. I got a photo with my own Mom before we left: 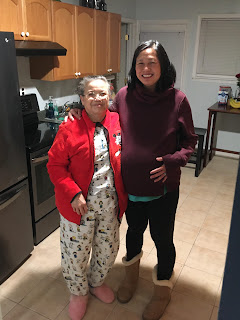 We got to the hospital early. It was nice being first, but SO early. We were excited. Well, I was excited. I’m sure Kevin was nervous as hell. Whenever anyone greeted us, I would exclaim “I’m having a 12-pound baby today!” And the nurses would laugh and say “no way, you’re so small, I don’t think so...” (which is really cute that they would tell me I was so small) and then Kevin would walk into the room and they would say “OH. Well, maybe you are having a 12-lb baby!”
All the nurses and staff were so nice. It was such a chill morning and they had Kevin get suited up in scrubs. But apparently they don't make shoe covers that fit over size 18 shoes. They did their best. We asked if he could just be in his socks with the shoe covers, but they said it could get slippery if…you know, bodily fluids. (EW!) So he just had the shoe covers kind of flapping around the tops of his sneakers and we laughed about it.
We met our nursing team, and they asked if it was okay that we had a University of Delaware student nurse observing and helping. I said "of course!" Then they asked if it was okay if he was a dude. I hesitated, but only because they actually asked that, and I thought that was weird. "Of course! He's gotta learn too!" Turns out this was the first surgery he has ever witnessed. So fun!
The anesthesiologist then came in to go over the spinal block procedure. The spinal block basically paralyzes you from the waist down so you don’t feel them cutting into your belly. This was the part that I was most nervous about, because who wants a giant needle in their back? But he assured me it was super quick, maybe 5 minutes at the most, and joked that it wasn't his first time doing this. ***OMINOUS MUSIC*** Kevin, who has pretty good intuition about people, later said he didn't like this guy from the start, because he was young and cocky!
So they were all “take your time, you've got plenty of time” and then suddenly it was almost 7am and it seemed that everyone had this cartoon bubble over their heads that said “OH SHIT IT’S ALMOST 7AM” and it went from super chill to GO GO GO GO GO.
I was wheeled very quickly down the hallway towards the operating room...it was pretty exciting, just like Grey's Anatomy, and I was the star of the show!
But suddenly we were inside the OR...and I was surprised it was so cold, and there were metal instruments everywhere, and actually, it was kind of scary, and not fun like Grey’s Anatomy at all. I went from being very excited “I’m having a 12-pound baby today!” to OMG this is a really scary place and I don't want to be star of this show.
Kirsten, AKA Dr. Smith, was my OB who I have known for many years and would be the one doing the surgery. I knew her through a personal friend and have been to her house for dinner and met her daughter years ago. She was all scrubbed up and asked how I was doing…she saw the look of terror in my eyes and said “it’s ok, you don’t have to be brave.” I let some tears fall, and she then held my hands as the anesthesiologist did the spinal block... Or attempted to.
Again.
And again.
And again.
This guy had trouble getting it in. (That’s what she said!) It was really painful. Like shooting pain down your body painful. The anesthesia team would tell me to try to relax, and lean over—two things that are really hard to do when you are pregnant with a MASSIVE BABY and someone is trying to put a huge needle into your back!
They actually had to call in a second anesthesiologist. I knew this second doc was cool because he had a Baby Yoda scrub cap on. But he had some trouble too. They eventually got it. When I talked to Kirsten two days later, she said it took them 22 tries to get the needle placed. I'm glad I couldn't see behind me, because I honestly thought they only tried like 3 or 4 times. But 22?! That's INSANE. Even the second doctor took 3 tries (which means…the first doc took 19 tries. OMG.) She said it was actually very unusual, since I have a pretty lean body type (minus the giant belly) which typically makes it pretty quick and easy to do the spinal block.
They tried to say I had scoliosis, which I know I don’t. (I'm a prosthetist-orthotist and I definitely know what scoliosis is, because we make custom back braces for it!) They tried to distract me during the whole process by asking me about marathons and triathlons and how many Ironmans I have done (22! ironically the same number of jabs to the back!). So then they blamed my really tight back muscles from my extensive triathlon history (not untrue). Later, my chiropractor theorized that my spine was a bit warped from carrying such a large baby, and we knew that my already tight paraspinal muscles in the low back got even tighter during pregnancy.
Apparently it took over 30 minutes just to get the needle placed into my back. They had told Kevin to wait outside as it would only be 5 minutes. So the poor guy was already freaked out in the first place, wondering what the heck is taking so long, and of course starts to freak out more when 30 minutes later, he’s told that there are some complications. OMG.
To be continued…
P.S. HAPPY 9-YEAR DATING ANNIVERSARY TO MY BABY DADDY!
Posted by Jocelyn Wong Neill at 10:09 PM