Here is the SF-Oakland Bay Bridge: 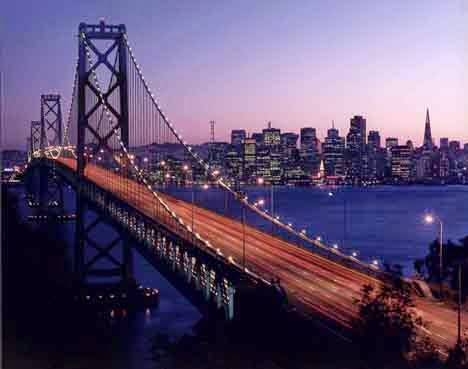 Exhibit B is the Chesapeake Bay Bridge: 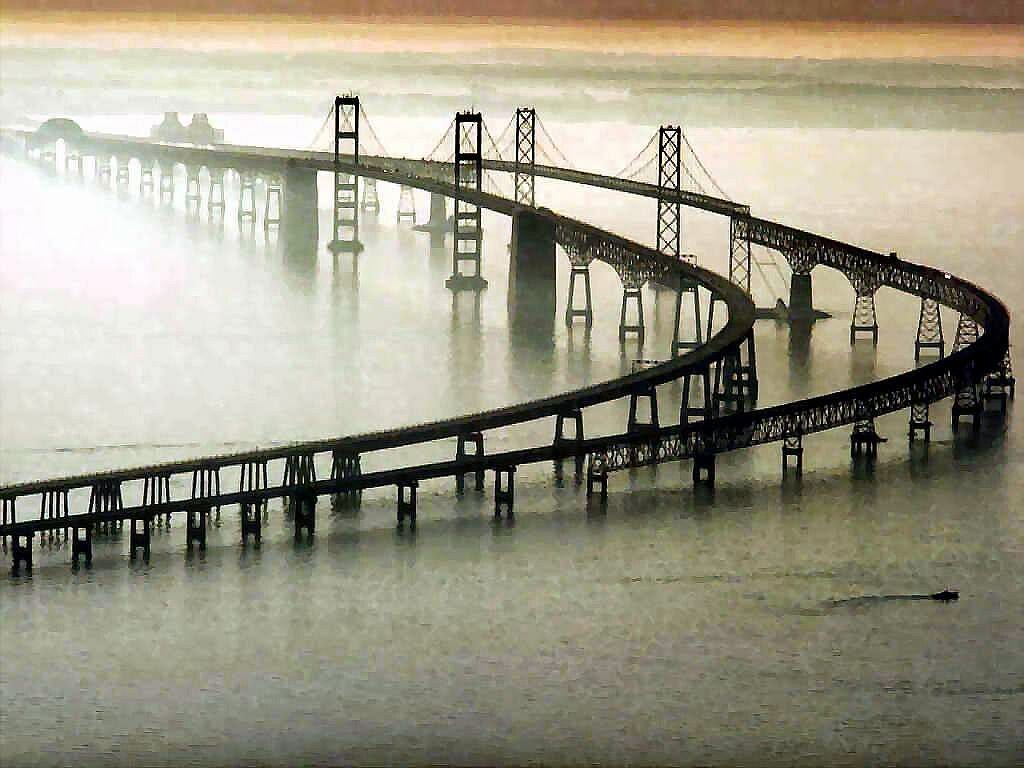 Now, that looks cool too! It's a tad shorter at 4.32 miles, not as scary high at 186 feet high, and ALWAYS costs $6 to go across it in the eastbound direction.

Both Bay Bridges typically don't let ordinary pedestrians onto them, and this would be the first year that the Chesapeake Bay Bridge would have a running race. Oh boy!

Hence why we were SO excited to drop $74.20 to run 6.2 miles! ($70 for the 10k plus a 6% service charge...I know, way overpriced to run a 10k!) Caitlin had signed up a year ago when the race was first announced, and I got duped into signing up when I was running the St. Michael's 10k in May, as they are put on by the same organizers. They called this a SOLD OUT RACE!!! But I had the chance to get in by running in the St. Michael's 10k! I've learned that calling a race SOLD OUT makes me a sucker for wanting to do it!

Anyway, I'm not sure what finish time I told them I would be running, but we were given Bib #'s based on this estimated finish time. I was intrigued to be #353! Out of 20,000? That's fast, right?! There were so many people running the race that they broke it down into 10 waves of 2,000 people, going off every 15 minutes. I was in the first wave and Caitlin was in the second. We had friends running in later waves but opted to head over earlier as we were expecting it to be a clusterf*ck with so many people on that narrow little bridge.

They were doing this as a "CUPLESS" race so there wouldn't be litter falling off the bridge into the bay, and I didn't think I needed to drink much for 6 miles anyway, so I wasn't planning to bring anything. At the last minute, I took my Camelbak without the bladder as more of a purse than a hydration pack. For my phone, wallet, in case it got too warm for my headband or gloves... Since it was a point-to-point race, the logistics were a little annoying but there were plenty of school buses to shuttle us to the start.

So, the shuttles went fairly smoothly and then it was time for...the pre-race selfie! 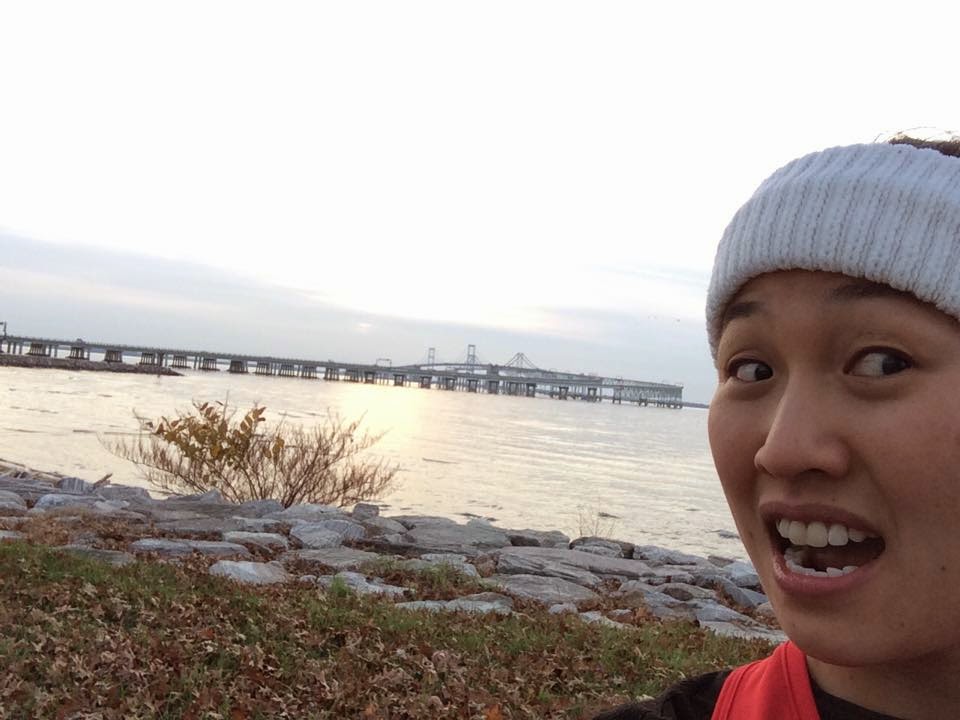 I know, I look scared of the bridge. I wasn't really scared, but I wasn't sure what to expect, either! I haven't done very much since Beach2Battleship, other than catch Kevin's Halloween night cold and fighting being sick for a good 3 days in the week leading up to the 10k. I really don't like cold races either, as I learned at Wineglass (cold being anything under 50), so I was apprehensive about the 43*F forecast. Such a cold wuss!

Anyway, BOOM! We started and I realized quickly that I get SUPER HOT when I am running SUPER FAST! (That would be 10k pace versus half marathon pace.) I quickly took off my cozy warm headband and wrapped it around my wrist. The race report shall now proceed to mile splits and race photos...

Mile 1. 7:07. The first mile is the part of the bridge that goes slowly upwards and I darted in and out of the crowd the first quarter mile for some free space. If you look at the first photo of the Bay Bridge I posted above (the Maryland one), you'll see that there's the skinny part at the beginning that does a sharp curve to the left. I ran on the left shoulder to run the tangents, it wasn't high enough yet to be scary! 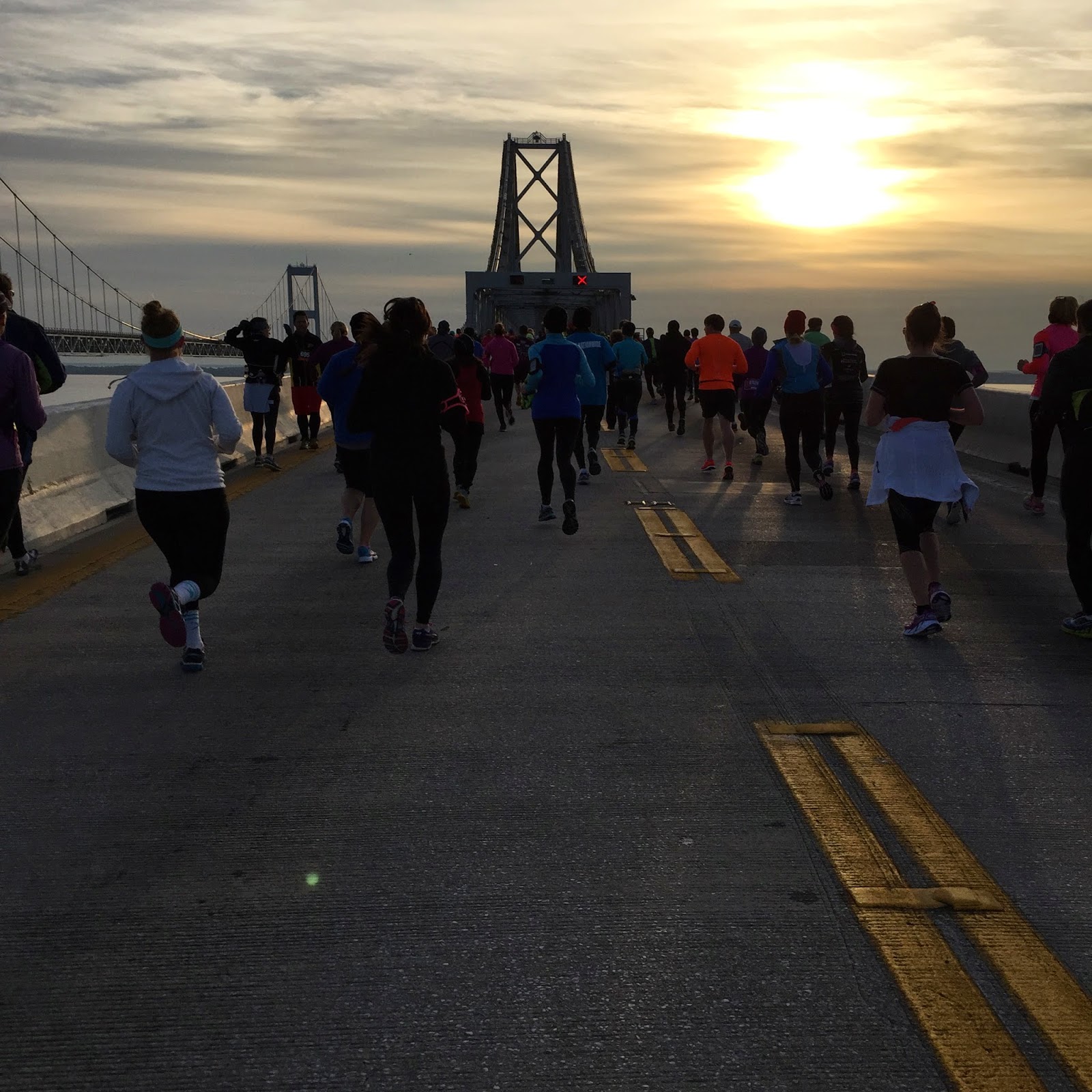 Mile 2. 7:27 UPHILL! This second mile was completely uphill. The gloves came off! I ended up running with the gloves in my hand. The cozy warm headband was a bridge casualty as it flew off my wrist when the gloves came off. But not over the bridge into the water. 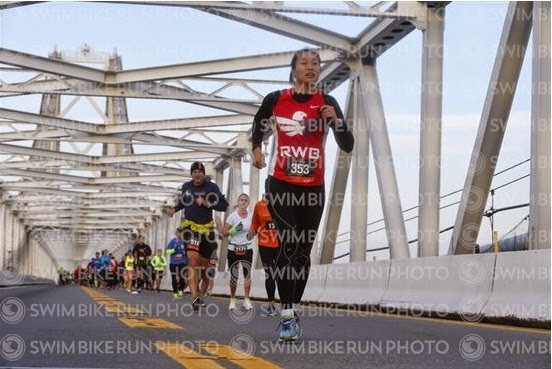 Right at the end of Mile 2 was actually the highest point of the race! So there on out, it was... 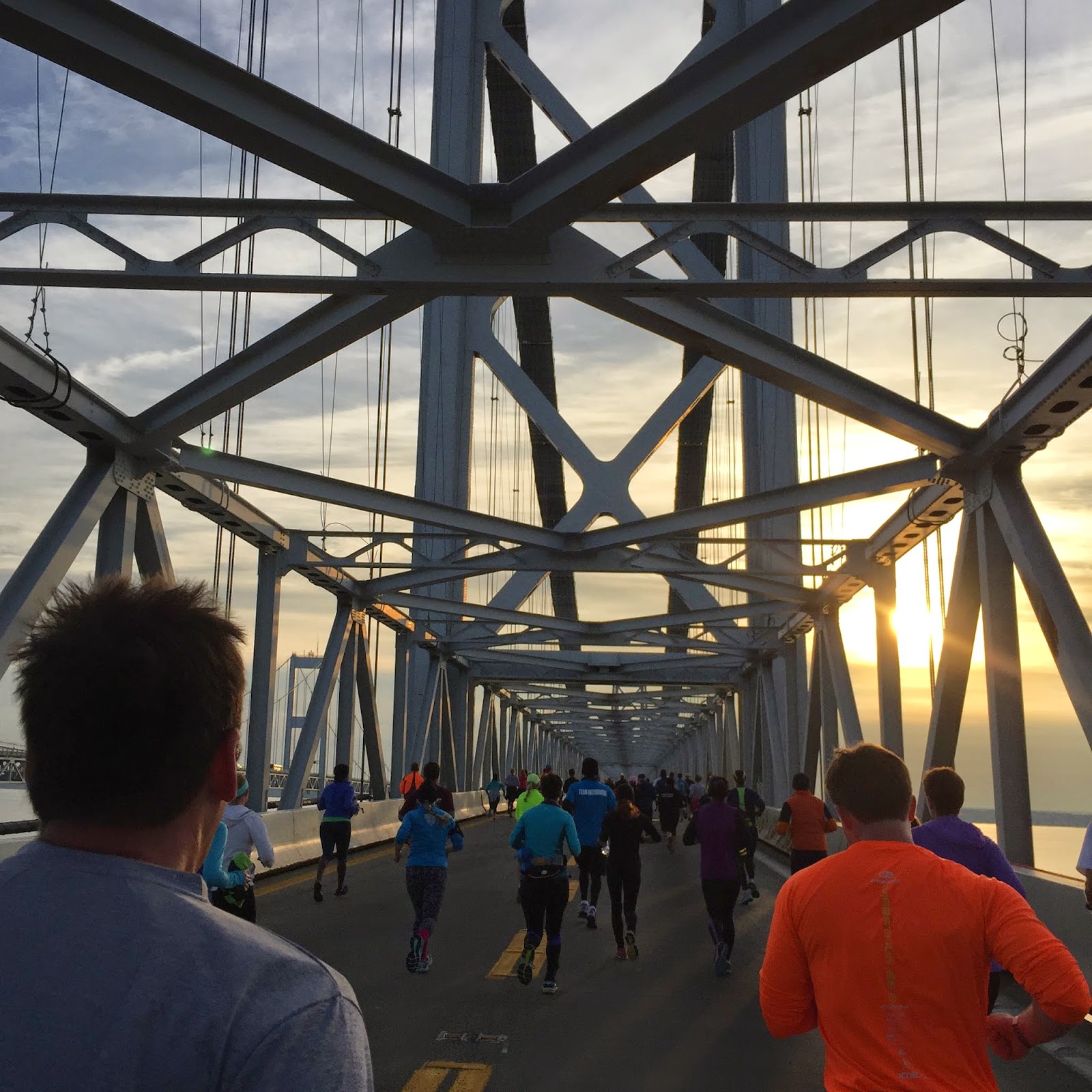 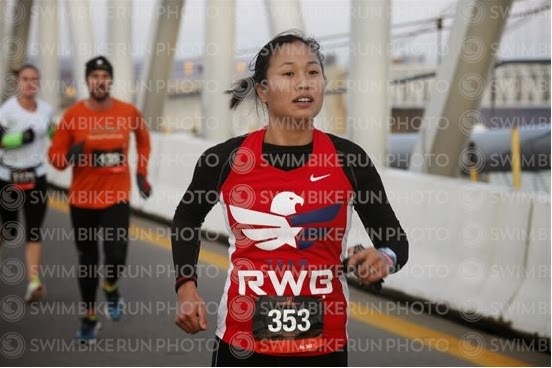 I don't know what to say to make this race report interesting, other than I was really happy to run sub-7's even though I haven't been doing much speedwork or let's be honest, anything at all recently. 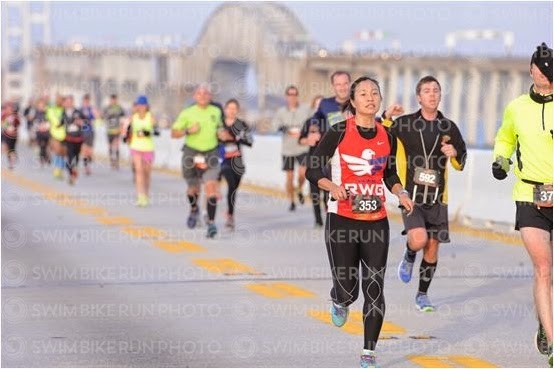 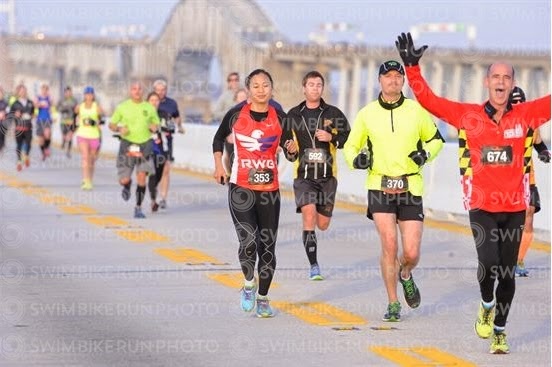 Yes, I ended up passing this 60-year-old guy (well, I had to look up his results since he is sort of photobombing me).

Mile 6. 6:56. The sixth mile was off the bridge and back on solid ground, a fairly flat mile but luckily I still had some momentum from running down the bridge.

Mile 6.2 1:15. Ran out of steam. I knew looking at my watch at the halfway point and closer to the end that I would be close to a PR. My previous 10k PR was in the mid-43's from my General Smallwood run split (looked it up to be 43:37 just now). But I didn't know that I would be so close to breaking 43 minutes! 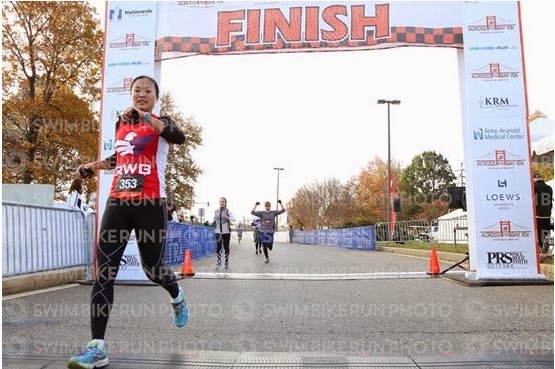 And hey, that's pretty impressive that 2/3 of the race was female! 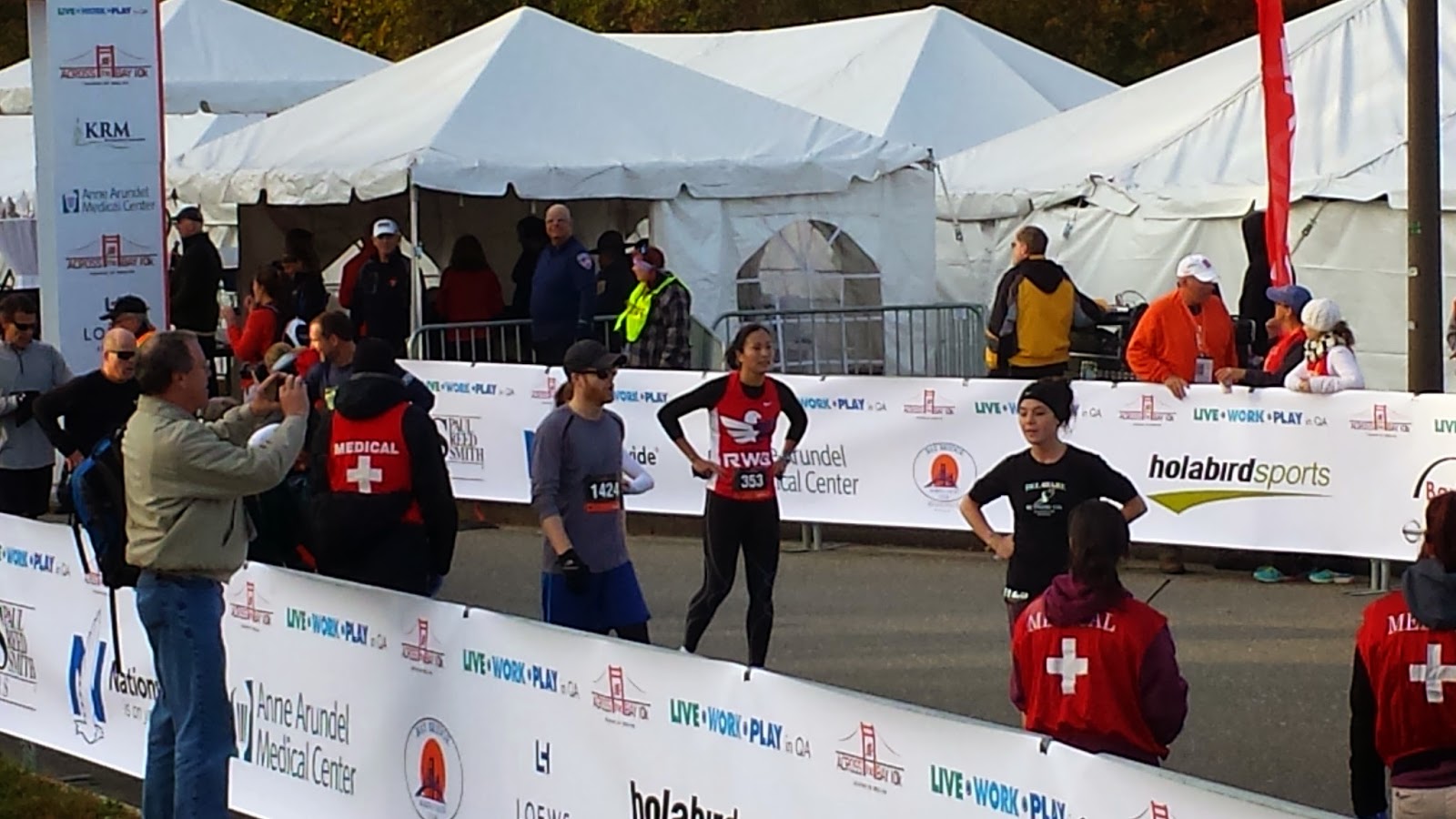 I learned that I was way overdressed for a 10k in the mid-40's--I had my fleece-lined CW-X tights and a North Face base layer, both were way too warm! This was a warmer get-up than what I raced in for the Wineglass Half, and it was 10 degrees colder there, so I should've known better. I tried to tug up my sleeves to no avail, but now I know to not be such a cold wuss. It wasn't even windy running over the bridge! We had beautiful weather. 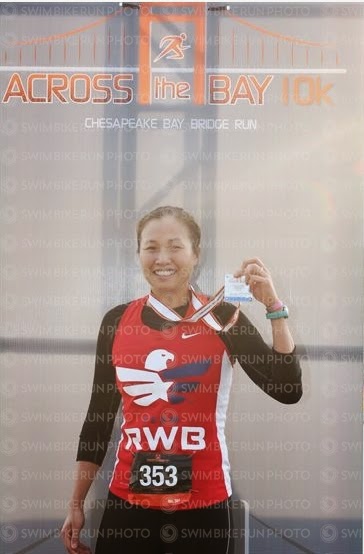 SOOOO, in conclusion, it was neat to run over the Bay Bridge and very well-organized for a first-year event. But the important question is...would I do it again? Not for $74, even though we all got a finisher's medal and a technical t-shirt. It was really cool to do it once, run and done! But the logistics were a bit of a hassle, and it's the same cost as a local Olympic-distance triathlon (with early bird pricing). I would rather do more triathlons next year! 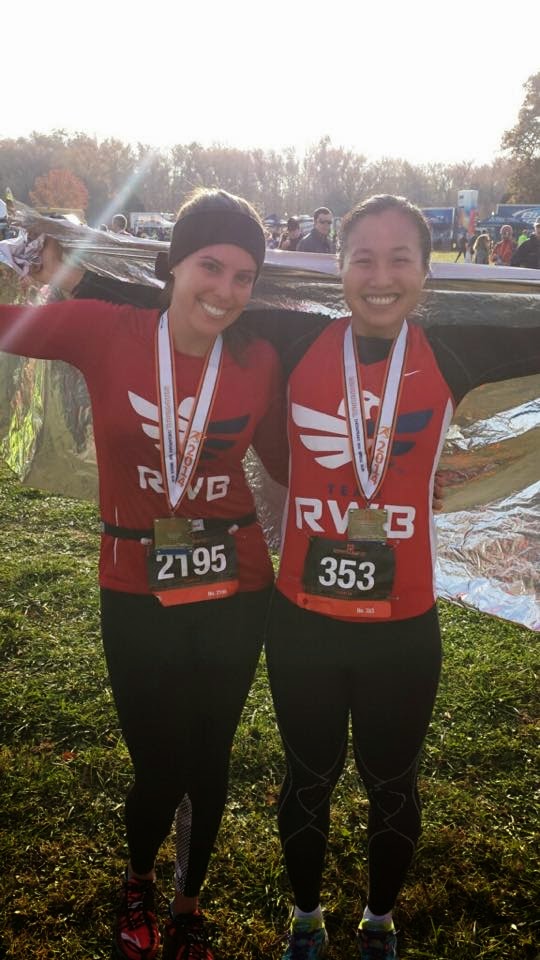