After my last 5k fiasco, where I employed the "fly and die" method of racing, I figured the goal for my next 5k attempt would be to pace smarter. When I had come home from Williamsburg a few weeks ago, I got a wonderful hand-me-down gift from my future maid of honor, Amy. It was her old Garmin Forerunner 210, still in fantastic (looks new!) condition, and she knew I was trying to focus on running and becoming a fast marathoner. Of course, my best friends know me better and always humor me, knowing that sooner or later I end up back on the Dark Side (triathlons).

I haven't run with a GPS watch before, as I've been waiting for them to become small and cute--an ex-boyfriend back in grad school had one of the original Ironman GPS systems, where you had to attach a huge pod to your arm, like the size of a Walkman. This was back in 2006 (holy crap), and I've waited for them to get smaller and cuter. I've never been that much of a techie with the running/biking/swimming gadgets so I questioned needing to know my speed and distance, only gauging those metrics when I ran on the track or treadmill.

But, I had been running with the CharityMiles app on my iPhone as it donates 25 cents to Team RWB for every mile I run. So of course I go from being a non-techie with an aversion to huge GPS watches to running with my iPhone, which is way bigger than any GPS watch. Go figure.

I did a few runs with Amy's GPS watch and confirmed why I never wanted to buy a GPS watch--it tells me how slow I'm running when I'm running slow. Which is 9- to 10-minute miles. Ugh.

Still, I seem to have the ability to run fast when I need to (in race situations) even though I'm such a slowpoke trainer. And all this is a long-drawn-out introduction to the 5k I ran on Friday, the Firecracker 5k in Reston, VA. 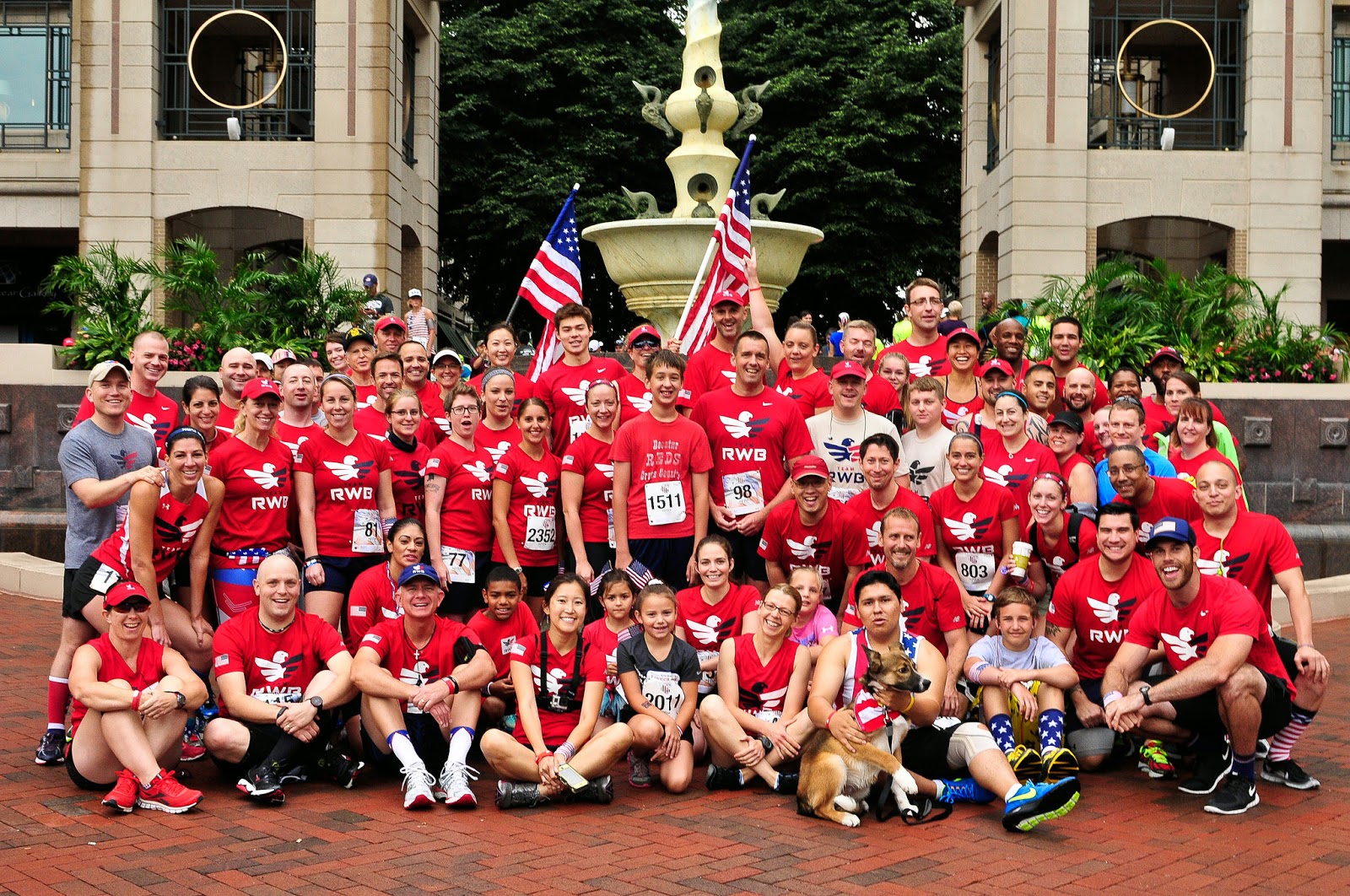 This was my first RWB event last year, and there's always a great turnout for the team and for the race itself. Kevin asked the night before if I would win it, and I started laughing, because he's seen me win the only 5k he's ever been at, so I had to pull up the results from the previous year. I didn't even crack the top 40 for females, as the winner went 16-something (there are always elite Africans that show up for the small prize purse, that's how popular this race is). I had run a 21:49 and taken 44th female. 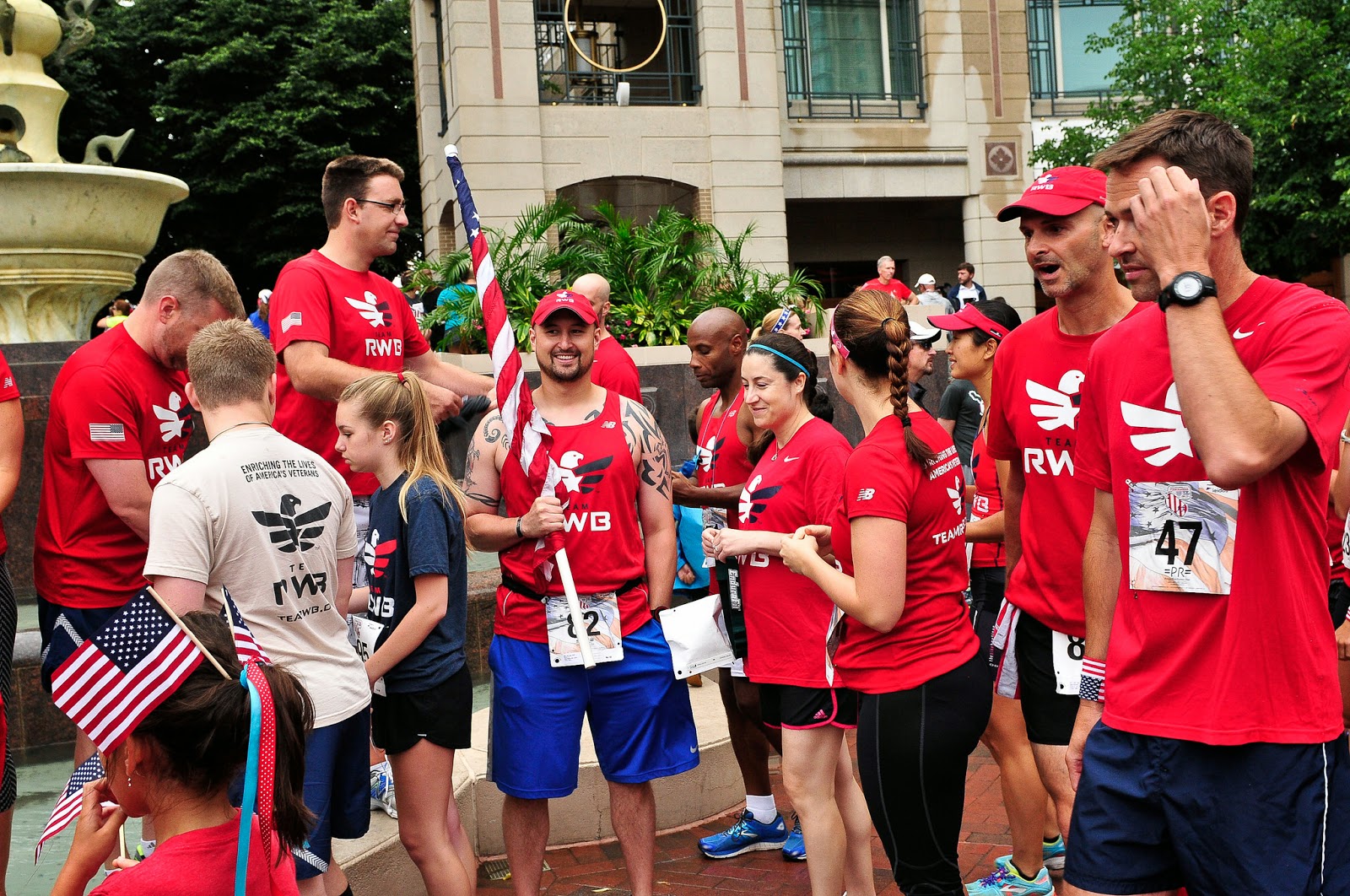 I figured that I would race with a GPS watch for the first time ever, to at least keep me from going out too fast and "flying and dying". My goal was to actually run all three miles under 7-minute pace, since my average at the last 5k was a 6:56 even though only the first mile was a sub-7! So I held back somewhat, started in the front but not the front-front, and it took me 5 seconds to shuffle across the starting line once the gun went off. I was surrounded by fast-ish people the whole first mile, and kept in control, going fast-but-not-too-fast.

I was really happy to hit 6:33 when the GPS chirped for my first mile! Excellent. Except...the "Mile 1" marker was still up the road. NOT excellent. I hit the mile sign with my watch at 7:31. EW. Not good at all. Then I started wondering if I was turning into one of those GPS geeks who is all like "yeah that wasn't really a half marathon, my watch said it was 13.23 miles!"

I tried not to overanalyze, and instead focused on picking up the pace if I really did run the first mile too slow. My "moving pace" was in the mid-6:30's, at least that's what the satellites were telling me. (I haven't really read the watch manual or anything.) So I kept hustling and when the watch chirped again, it said "6:30", awesome. And once again, a bit before the Mile 2 mark. Maybe just the first mile was a touch long.

I was still feeling strong and catching up to people, or at least not getting caught, and during the third mile felt some people passing but dug deep, increased my pace, caught back up and kept moving. I still felt like I was suffering, but not dying a horrible death like I did at the last 5k. The last mile was pretty painful, "Chirp! 6:44", and then of course when the watch hit 3.1 miles, it said something like "20:23", which would be a PR for sure! But alas, the finish line still loomed ahead.

Kevin didn't run, but he was waiting at the finish line faithfully. He is always easy to spot in a crowd: 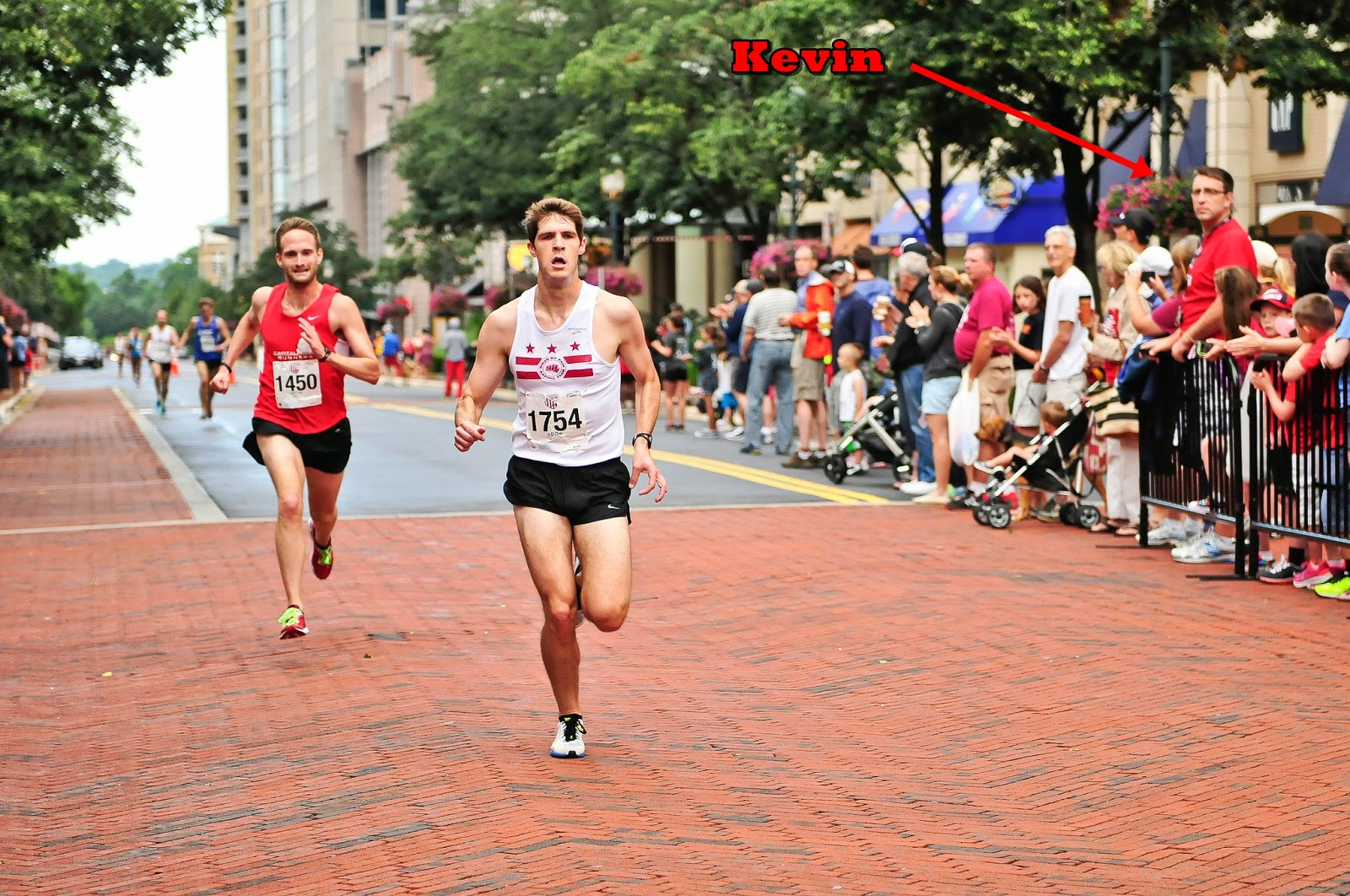 As I sprinted towards the clock, I saw it tick over 21:00 and so, my official chip time would be 21:09 and I became "one of those" dorky GPS wearers who started wondering if my watch was off, or the course was off, or I didn't run the tangents as well as I should have. Many others commented that the course was long, and I'd like to believe so as my race pace according to the results was 6:49, even though my GPS pace for 3.23 miles was 6:39. I certainly didn't disappoint with a Quadzilla ugly face and super legs: 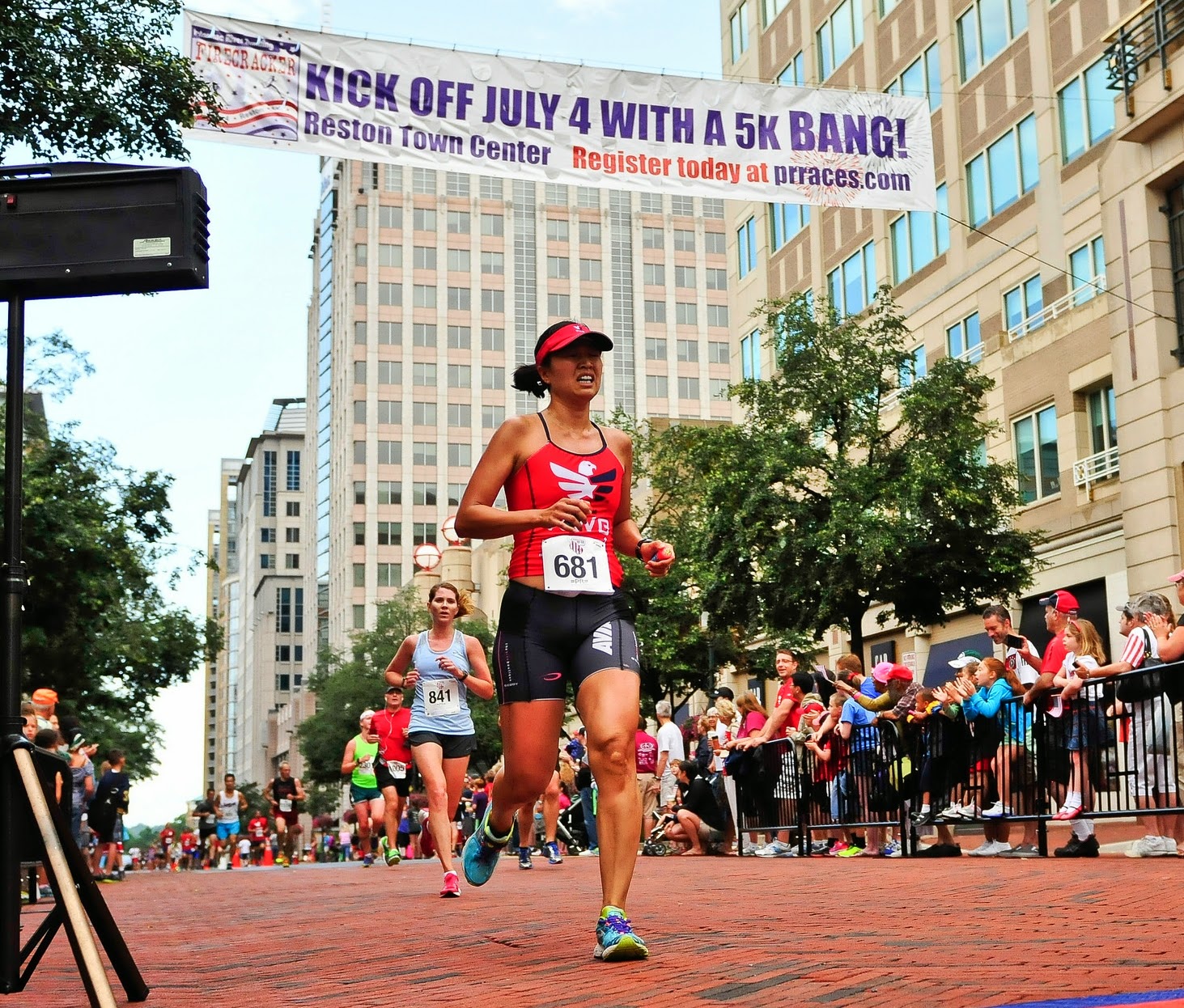 Oh well, I ended up with what I think is a PR, 21:09, and even snagged 2nd in women's 30-34, although I didn't bother going to awards as I figured I was too much of a slowpoke to get anything. As it turns out, apparently I better get myself under 21 minutes before I try to go for sub-20. 5k's are painful. I'm happy that I ran all 3 miles under 7 though. According to my watch anyway. 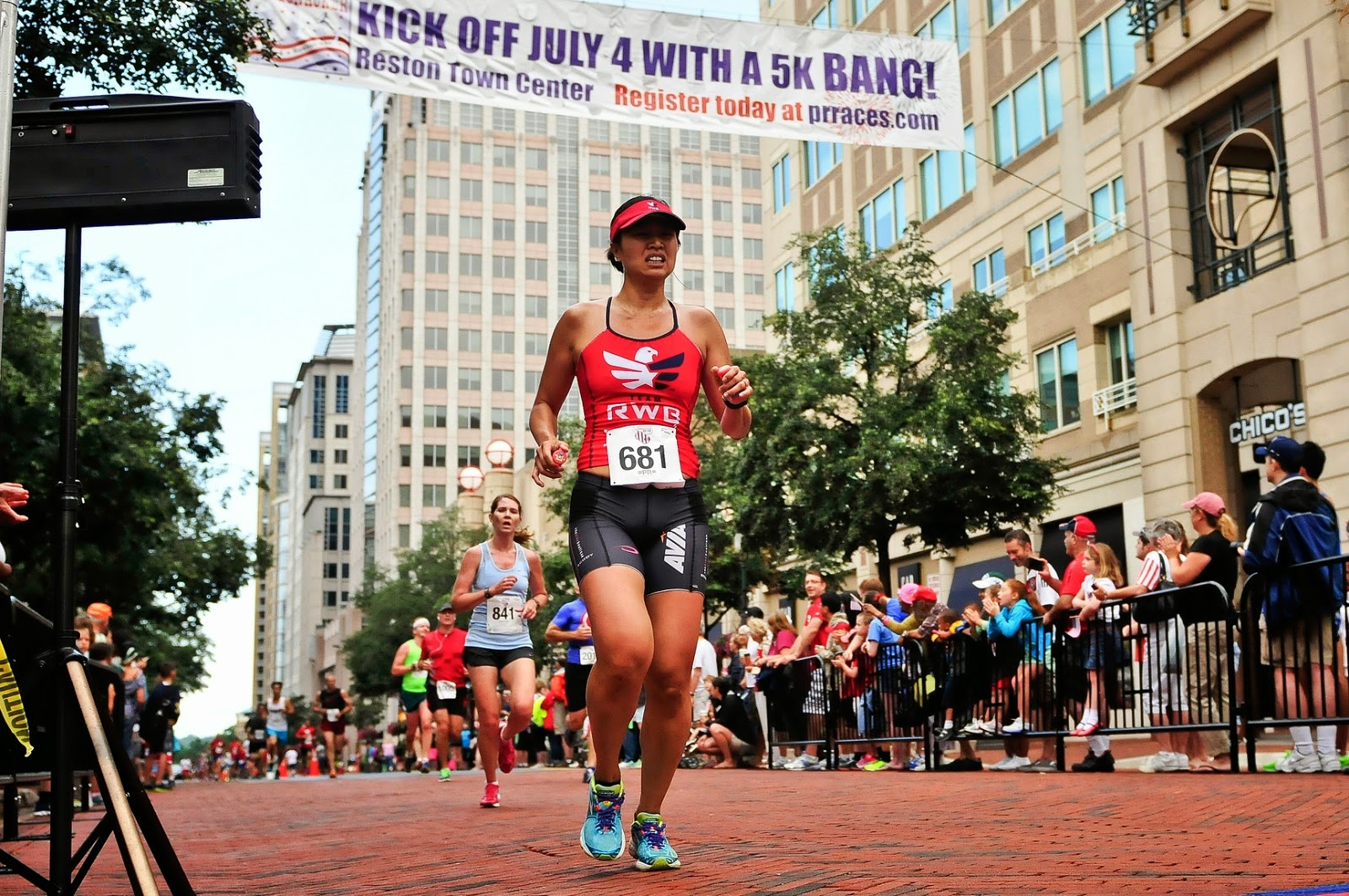