If anyone tracked me online, they would've seen my little joke under "Profession":

But honestly, the time, the splits, the result, the placings didn't really matter that much to me. Remember when I signed up? Or rather, announced on my blog I had signed up... I had a few goals. None were time-specific:


Actually, I think I did accomplish all of those, to an extent, but have also realized there is no set "finish line" for those goals. They are all more process-oriented and I will continue to tackle them after the race...

When you've done Ironmans anywhere from under 10 hours to over 14.5 hours, then get injured and burnt out and take 6 months completely off anything triathlon-related, and give yourself 4.5 months to go from ZERO to Ironman shape...well, I had a few ways of making sure I did not get too caught up with my finishing time. First was to wear a fun outfit on the run, second was to not even have a watch on during the entire race. (I did have a bike computer though, and sneaked a peek at the clock next to the swim exit.) 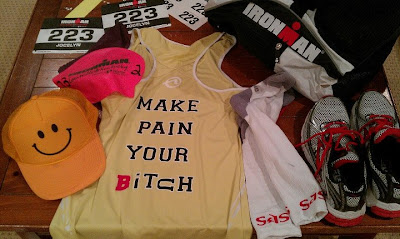 I was trying to simulate the very first Ironman I had ever done--the only one where time didn't matter, and there were no expectations or pressure. It was about finishing the race and enjoying the experience. This would be my 22nd Ironman, but would be my first one back after I had angrily quit the sport back in October, and declared I never wanted to do a triathlon ever again! I had decided to return to age group racing. I actually have one year of eligibility left as a pro (it expires in December), but I knew there was no way I'd get to that level of fitness by Louisville (...if ever). I didn't even think I'd be very fast in my age group. I know everyone had good intentions, but I found too many people assuming that I would kick major ass, and asking me if I would take my Kona slot (assuming that I would still be a top age grouper despite my hiatus).

I did my best to ignore everybody else, and it wasn't easy. A small part of me secretly hoped and wished that I would magically have the fitness, speed, and endurance I used to, and I'm ashamed to admit that there were big moments of frustration leading up to the race when I just wanted to throw in the towel--because if I wasn't going to be as good as I used to be, what was the point?

So I had to keep reminding myself, the finish line wasn't in Louisville, and that this was still part of my journey. To rediscover triathlon and why I fell in love with Ironman in the first place. (I still didn't want to embarass myself too badly though.) I also experimented with training for Ironman without having it as my #1 priority. Family was more important, and my job was more important.  Balancing it all was tricky, but I was very happy to have the Sherpa also come to Louisville as his first Ironman sherpa experience.

The nice thing about having a sherpa is he takes pictures of you and the Colonel, and will eat KFC with you after the race. To be continued! 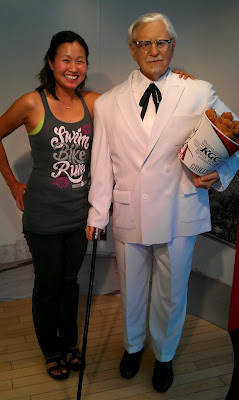