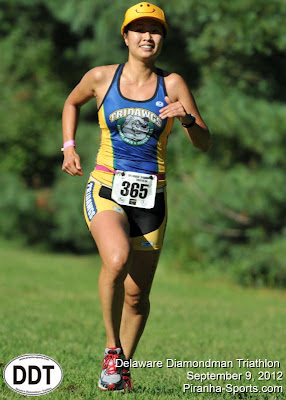 I will start off this race report by saying I am terrified of sprint triathlons. Which you may think is a strange thing to say as they should be "easy" compared to Ironman. Well, the last sprint triathlon I did was summer 2007, shortly after I had been recruited by teamTBB. Since that last sprint, I've done a few Olympics and 3 half Irons. The last half IM I ever did (Florida 70.3 in 2009) was the one that qualified me for my pro license. From there on out, I strictly raced the Ironman distance... 17 times...as my coach decided I was suited more for ironman distance (because I'm mentally tough but not speedy enough for 70.3). I've been used to going really long at a "comfortably uncomfortable" pace for the 10-11 hours of Ironman, which is significantly slower than red-lining the sprint distance for less than 90 minutes. I look at short course triathlons as hopping aboard the PAIN TRAIN. Choo choo! You have to go so much faster and it's much more painful! But you are finished way faster.

So, the Diamondman Triathlon at our local Lums Pond was a TriDawgs designated team race, and offered either a sprint distance or half-iron distance. Since I had only done IM Louisville 2 weeks prior, and wanted to hang out with my fellow TriDawgs, I signed up for the sprint. I was tempted to sign up for the half but told myself not to be dumb.

After Louisville, I didn't do too much. A swim here, a bike there, a run here and there. In hindsight, I shouldn't have even bothered switching back to my training wheels because I barely rode. The night before, I stayed up past 11pm, writing up my Louisville report as I was stubborn about getting it done before I raced again (which I didn't quite finish anyway).

I was kind of disgruntled that I would have to wake up at 5am and leave by 5:30am to get to the race site by 6am...and the sprint wouldn't start until 8am. But the half started at 7 and transition (and packet pick-up) supposedly closed at 6:45am. *grumble*grumble* So...race morning. For breakfast I ate half of a dark chocolate bar (Trader Joe's 85%) while driving to Lums Pond. I wasn't even planning to use my race wheels (out of sheer laziness), but knew that if I got beat by just a few seconds here or there, I'd be pissed. So I ended up doing that in the parking lot, switching out the brake pads and put on my race wheels.

In registration I was kind of stoked to be #365, and thought "365 = the number of days in the year I think about triathlon!" Except this year is a leap year. Close enough. 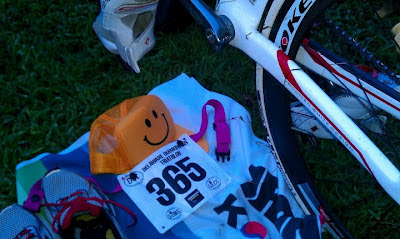 It was great to catch up with my old swim buddies from Mac's pool (Tory was doing the sprint and Meredith and Kevin were doing the half). My fellow Tri Dawgs were EVERYWHERE and this was my first race rocking the uniform the entire way. There were at least 40 of us doing the race--here's me and Diane in the bathroom line after the half'ers already started: 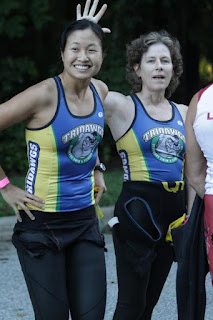 It was surprisingly wetsuit legal thanks to some downpours we had the previous night, but I didn't bring mine because I wasn't sure how much benefit I would get over 0.6 miles of swimming. I did bring my "illegal" Blue70 speedsuit circa 2010 (before this textile fabric was illegal for warm temp swims). On this day, it was legal since wetsuits was legal. Unfortunately most everyone else was in their wetsuits. I swam my butt off the whole way (trying to remember, "it's short, just go all out!") and then put on my extra pair of shoes for the 3/8-mile run to transition. I was surprised to see Tory in her Out There Outfitters jersey head out on the bike just as I got to mine. Wait...I used to swim faster than her in the pool! and she says she hasn't been training at all! Either wetsuits really help, or I'm really out of swim shape, or both! 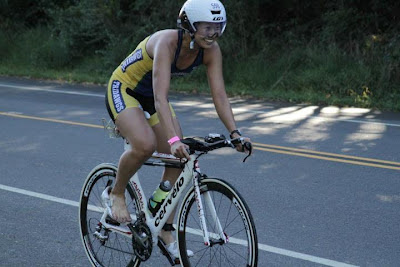 My T1 was pretty awkward as I was wearing my teamTBB golf ball aero helmet, which I don't ever use for Ironmans or training. (The "don't try anything new on race day" rule? Ha!) I fumbled a bunch with the helmet straps, then tried to get on my bike with the shoes clipped into the pedals already. You know, for speedy transitions that you don't ever practice. Finally my feet were in, and I tried to hammer the whole way. My fast-twitch muscles were feeling pretty nonexistent and there were times I thought "um, this feels like how fast I go in the Ironman..." 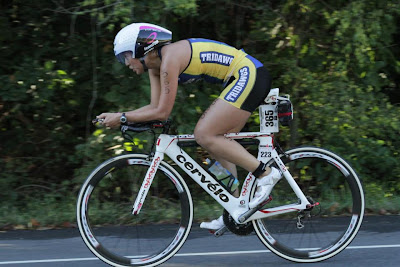 My only race nutrition was a bottle of diluted Gatorade on my downtube. It's a sprint. You don't really need calories. And if you are going hard enough, then it should be hard to breathe and too hard to fumble around with gels or other food. I steadily passed people throughout the bike (the men had a 5-minute head start) and it was cool to see my fellow TriDawgs either on the course or yelling on the sidelines. It dawned on me that with a 16-mile bike and a 2-mile run, if I didn't catch people by the end of the bike, I probably would not have enough real estate to catch them on the run. And I wasn't sure what my run speed over 2 miles was like. It used to be my specialty when I was a freshman in high school...but that was erm...16 years ago!

Unlike in longer races, I was going so hard I couldn't even talk and say "good work" to people when I passed. When I FINALLY caught Tory (which took forever, she is super strong even when she says she hasn't been training), I tried to yell "pain train, choo choo!" but I don't think I managed to say much! Our course overlapped with the half iron course, and I saw Meredith up ahead. I finally caught her with a mile or two left of my bike ride, but the crazy girl was going nearly as fast as I was. I know when I slowed down to dismount in T2, she ended up passing me back. whew! 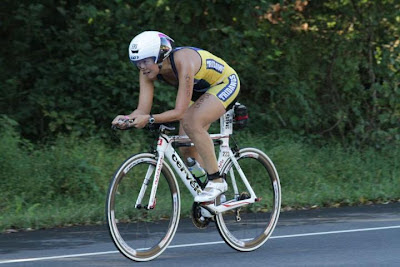 I had made a super last-minute decision in the final miles of the bike ride to NOT put on socks. I'm not sure when the last time I raced sockless was, but remember, I'd only done Ironmans in the last 5 years. Sockless for Ironman would be a bloody disaster. But for a sprint? Every second would count! And I needed the time if there were still women in front of me, or stronger runners chasing me down. Eeep. (Although I did not have elastic laces on, something I'll have to use again if I want to be a short course superstar.)

I threw on my smiley face hat and race belt, and headed out on the run, just thinking "turnover, turnover, turnover!" to keep myself moving. I am so not used to having to run so hard out of the gates. I also left my magic running sticks in Louisville and my arms felt like they were going all over the place. Oh well! I was catching up to guys but didn't see any women ahead. The turnaround seemed to take FOREVER, and when I finally got to it, I realized I was winning the women's race. That meant they were all behind me...and there were a couple of them RIGHT BEHIND ME. AUGHHHHHHH!!! 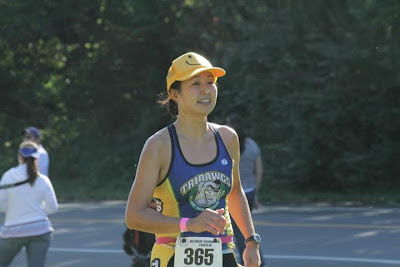 On the way back, I yelled at myself, Cadence, cadence! Faster, faster! Pain train, choo choo! Running out of fear of being overtaken is...frightening. I was so relieved to get back to the blow-up lighthouse that marked the path through the trees and towards the finish area. My teammate Marco was yelling something like "you got this!" but I did the thing you're not supposed to ever do, I looked behind me. Super relieved that I did not see the 2nd place girl. Whewwww... There were a bunch of guys just ahead of me but I did not have enough real estate left to kick it in and get them. Plus, I kind of wanted the finish to myself if it was going to be my first triathlon win on American soil, ever. (I've won a couple races in Korea.) 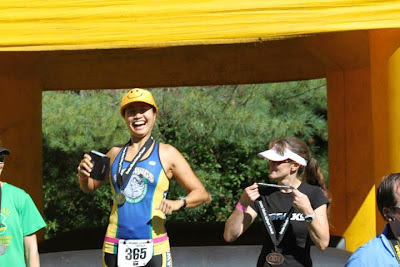 And that was that. I haven't ever won a sprint distance triathlon before, either. It wasn't a big race or anything, but I was pretty excited to win. As evidenced by the montage of awards ceremony photos... 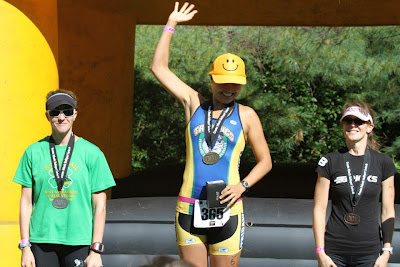 It was pretty darn exciting to stand on the top step of an awards podium for the first time in a while. I actually almost missed the ceremony because I was hanging out at the TriDawgs tent when Coach Glenn yelled at me to get over there. Then I felt like a horrible bitch because I had to push my way through the crowd when they called my name and totally pushed the 2nd place woman out of my way. Sorry, 2nd place lady! 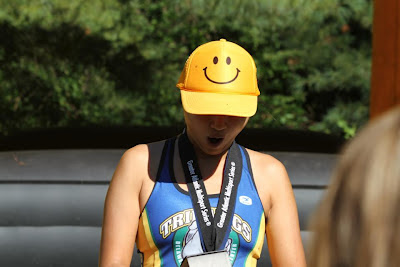 I was really surprised that I won a Polar heart rate monitor for winning. Too cool! The winners of the half ironman got the same watch and I only had to do like a quarter of what they did. Bwahahaha.

Sometimes you need a little confidence booster here and there after having the sport you love beat the crap out of you. (Triathlon and I...we have a rather abusive love/hate relationship if you haven't picked up on that.) This sprint triathlon stuff isn't so bad...it's over so quick that you forget about the pain train. Everyone off the pain train! Choo choo!

The best part though, was having my local triathlon family there to celebrate with. The TriDawgs are known for tailgating after our club events, and people always bring home-made desserts and we drink adult beverages and cheer for our friends and teammates...I am really great at yelling at people. 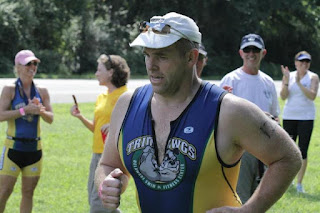 Bill was at Bacon Happy Hour with me the Thursday before the race. He finished the half IM on very little training, thanks in part because I insisted we share the bacon butterscotch ice cream dessert as part of his nutrition training. Pro secrets! 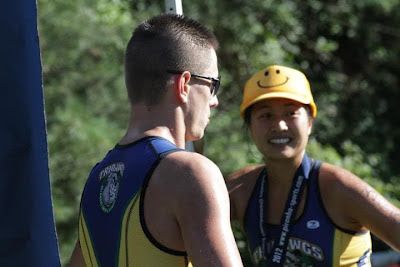 This little race was such a stark contrast to my days of living out of a suitcase as a pro, going to races by myself and doing it as a job. It was a very lonely road. Now I race with a smiley face hat! 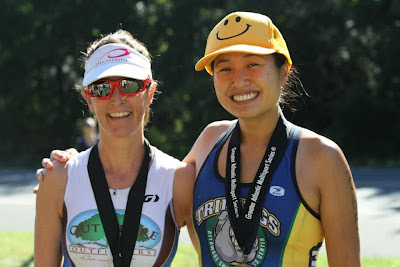 I thought about going for a late season half Ironman and actually training properly for it, but at this point, I'm heading to El Salvador again at the end of the month for the Healing the Children trip like last year. I think when I race a long course (70.3 or full IM) again, I'd like to actually go for a decent time and not be afraid of falling short of the athlete I used to be. Which means that will have to wait until next season. In the meantime, I plan to close off the 2012 tri season with another sprint at Cape Henlopen, October 14th.

Thanks everyone for being awesome, and to Lenny Rogers for all the race photos!
Posted by Jocelyn Wong Neill at 2:53 PM