It appears there are still general entry slots available to Ironman Louisville.
I wonder if I had known that back in April, if I would've waited? And if I waited, would I have actually been training as much as I am now?
Yes, the rumors and rumblings are true. I am doing Ironman Louisville in ONE MONTH!

It's a bit hilarious and frightening. From October through early April, I was so burnt out and DISGRUNTLED that I didn't want to ever swim or bike or run again. Not anytime soon. So for over 6 months, I didn't. I tried to learn to race walk, but those Olympic Trials came and went, and my 12-minute miles for a 5k were no match for going sub-8 miles for a 20k. Of course I missed triathlon. I loved it and breathed it from when I was 18 years old to my foray into the professional ranks almost 10 years later. Somewhere toward the end of that short-lived pro career, it became something I had to do and was not fun or enjoyable any more.
On Easter Sunday (April 8th) I went for a short run for the first time in many months. It felt so free after trying to master a walking technique that was like "running with one foot on the ground" and having to focus on every step.
On April 11th, I renewed my YMCA membership. I swam for 30mins. My first swim in half a year. I told myself if I could get through 30mins of swimming, I could sign up for Ironman Louisville (I was told that in previous years it sold out by Tax Day). One of my besties, Amy, is racing and I was already planning to go as cheerleader. Zeke and Tory (old swim buddies) were also signed up! After so many ironmans, I had never actually done one with so many good friends! And I loved my homestay Kellie from when I raced in 2010. She has always been so supportive and welcoming, and their house is gigantic!
On April 12th, I decided to spend my tax refund on an Ironman entry fee. It will be my Ironman debut for the W30-34 age group.
I needed some motivation to kick my butt back into shape. I'm not trying to break any records or win anything or steal someone else's Kona slot. My goals for this race had always gone something like this:
Do I have a time goal? Maybe get an amateur ironman PR for myself? The fastest I'd gone before turning pro was my 12:08 at Ironman Wisconsin in 2005.
For sure goal: Finish with a smile and have KFC and bourbon at the finish line!
So you want to know what my training's been like since Easter Sunday? That day I started keeping a training log again. My weekly volume has gone something like this:
April: 5.5hrs, 6.5hrs, 8hrs
May: 9.5hrs, 10.5hrs, 6hrs, 9hrs
June: 11hrs, 7hrs, 13.5hrs, 10hrs
July: 4.5hrs, 7hrs, 14.5hrs, 14.5hrs
One month to go! That's scary. But my key workouts are showing some progress. In April, I wondered if I could go "from ZERO to Ironman" in the span of 4.5 months. I started out barely swimming 30mins and laughing at myself, that if I were in the Hunger Games and there was a swim challenge, I wouldn't be the first to die, but I certainly wouldn't win either. Now I can bust out 30x100's on a decent interval and do band-only 50's. ...When I'm not hungover. (Hey, it was my co-worker's going away party last night. Had to partake! I love the company I work for.)
My 30min runs have been built up to a 2.5hr easy long run and last weekend I could do a 2-hour track session of 800's. Slower than the olden days, but I was able to descend all of them and the last one I busted out was indicative that my body has not forsaken me. It will just take time to get that speed back. And I can hammer out hill repeats like nobody's business.
Onto the bike, I think I've mentioned recently that I still feel heavy on the uphills and that downhills scare me. But put me back to my old 4-hour flat TT loop that I had plotted out when I moved here 2 years ago and the initial "oh my crotch is not used to this any more" has subsided and White Tiger has started humming along quite nicely.
I started out with a 30-min bike session in April too. 30min of each sport to begin with. No pressure. EXCEPT OF COURSE THE PRESSURE OF SIGNING UP FOR AN IRONMAN ON 6 MONTHS OF ZERO TRIATHLON TRAINING.
The more I look back at this 2012 training log, the more hilarious it is. After zero swim/bike/run, I did 30mins of each sport and then basically straight into "OK, I think I can do an Ironman again. Let's sign up!" This is why those races all sell out so quickly, idiots like me who barely train and then think they can do an Ironman. ;) Except Louisville still has not sold out?! Don't people know there is KFC at the finish line?! 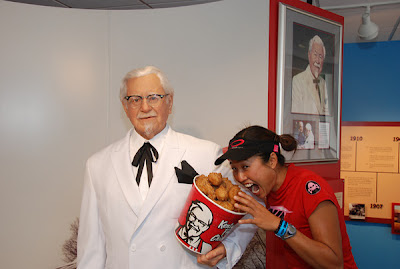