About a year ago, on Labor Day weekend of 2011, the Sherpa and I had been invited to an event organized by his friends. They called it the East Coast Barathon (modeled after one done in Colorado, I think) and was held in their neighborhood. It was a 5km run, over a 1-kilometer loop in the neighborhood, and you had to drink a beer before starting each lap. Men have to drink a 12oz beer and women only have to drink an 8oz beer. If you throw up, you are DQ'ed!

It was awesome, and Sherpa had always talked about bringing one down to Delaware. So we did that last weekend! It was to be the inaugural "Delaware Barathon," which I always pronounce "Beer-athon" but he pronounces "Bar-athon." It took place in the neighborhood of some of our Ultimate frisbee friends. Actually Dustin's house, who is one of the professional ultimate players for the Philadelphia Spinners--they won the "world championships" against Detroit earlier this year! (It's like how the Super Bowl is considered the "world championships".) 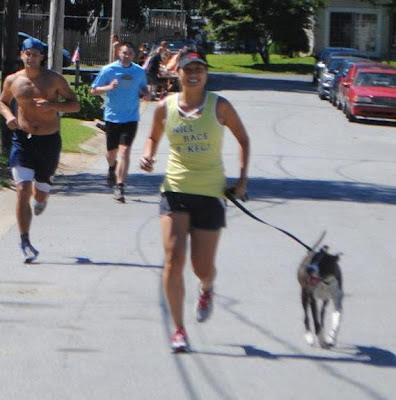 I'd gotten sick right after my little sprint championship race the previous weekend...which I attribute to drinking some of that gross Lums Pond water. And by sick, I mean, I had to actually go home from work on Tuesday morning, which I really never do as I have had the Tiger Mom "perfect attendance" mentality drilled into me as a kid. (Mom never let us stay home if we were sick, so we could get the perfect attendance certificate.  The only time I remember staying home was during the ginormous earthquake of 1989. I was 7 years old and we were living in San Jose, CA at the time. RIGHT by the epicenter!)

Anyway, I felt pretty terrible. I didn't work out that entire week other than going on short walks toward the end when I was feeling better. So I figured that I would run with Socks the Christmas puppy for the 5km. So off we went! I downed my 8oz like a champ (no beer for Socks). Unfortunately my competitive instincts kicked in and we had also made Socks run around and play a bunch before the event so that she wasn't too rambunctious. By the end of the lap, Socks was getting tired so I did the partner hand-off to our volunteer pourers at the table, who handed her off to the Sherpa when he got to the table. 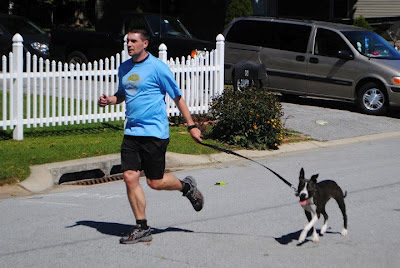 But even though he was going slower than me, she still got tired. We have been doing 30-minute training runs too! She got to sit out the rest of the race. That's okay, we are still training for her first puppy 5km. I will try not to push her too hard like a Tiger Mom. I kept powering through and took the lead halfway through the second lap. It turns out that some guys dropped out, and one threw up. I didn't start to feel woozy until the 5th lap. I remembered to keep burping because half the challenge is keeping down all the beer bubbles. (I remembered in college one of my track teammates who won the beer mile told me the secret is to pat your stomach to burp out all the bubbles.) My strategy (and I've only done this twice now) is to run as fast as possible so that the alcohol doesn't hit you until you finish the 5km! 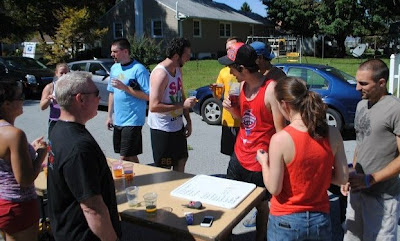 My boss even showed up to be a volunteer beer pourer! That's why I know I'm working for a great company! I started lapping people and then in the finishing sprint, Dylan (on his 4th lap) outsprinted me so that he wouldn't get lapped. haha! My throat felt pretty scratchy from running so hard after being sick. But I was super surprised that I ended up going 24:12. I think that's a new 5-beer 5km PR! 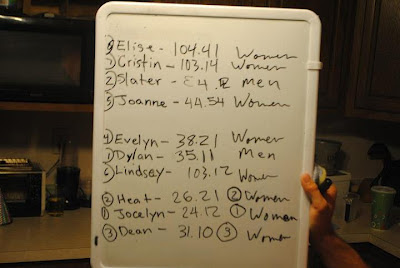 Not a huge field (the DNF's and DQ's were simply erased from our high-tech dry erase scoreboard) but a really fun first-year event. Special props to my roller derby coworker Evelyn for completing her first 5km ever! Actually, it was the first 5km run EVER (beer or no beer) for more than a few of these competitors. Well done! 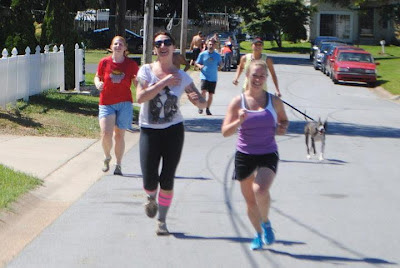 I won a Guinness pint glass and don't have a photo, but oh look, here is one of me with the stuff I won the previous weekend! 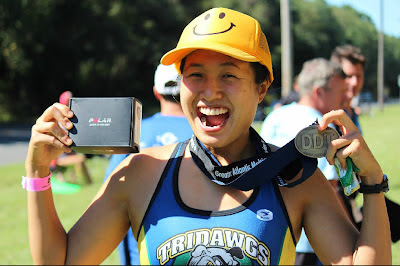 (I told you I was really excited...) Anyway, as usual we had the complaints from the guys that 12oz is much more than 8oz for the girls. The first three women beat all the guys, and only two guys finished. Well, I agree 8oz is much less than 12, but I don't make up the rules here, folks. I'm sure I could still beat all the guys if I had to drink 12-oz beers ;) 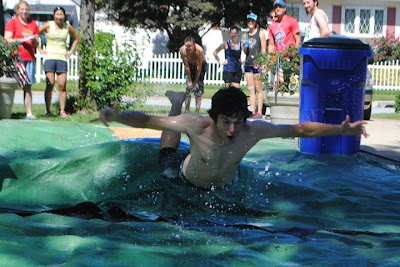 Dustin had even set up a slip-n-slide in the front yard... 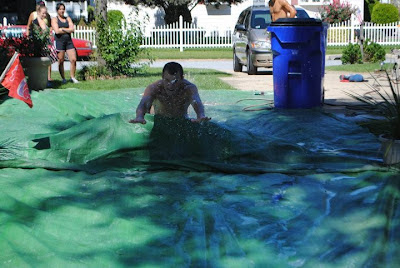 With a little speed bump/ramp in the middle. It looked dangerous. Some people even did a slip-n-slide run after each 1km lap (drink, run, slip-n-slide). Hmmm. Could be a new kind of triathlon! 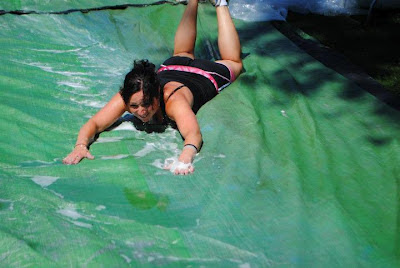 And then at some point, people raided Elise's closet and put on all kinds of dresses (pretty, ugly, Halloween costumes). Guys really like to have any excuse to wear a dress... 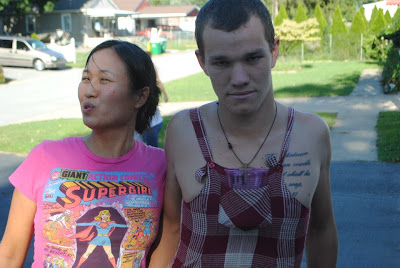 And then we played some barefoot Ultimate. It was people in dresses vs. not in dresses...which was a bit confusing. 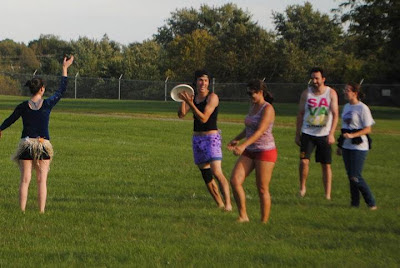 I also finally agreed to sign up for my first Ultimate fall league this year. Sherpa has been bugging me for nearly 2 years now, and I no longer have the excuse "I'm a pro triathlete and can't do anything fun where I might get hurt." Oh look, here is even my first photo trying to catch a frisbee: 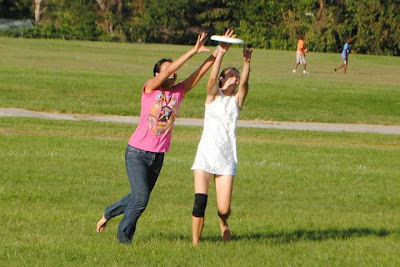 Hopefully my long arms will help me out, but I've always said the same thing about swimming. The season starts on Sunday but I will be missing the first game for the trip to El Salvador. This week has been all about recovering from being sick and getting ready for the El Salvador mission. Hasta luego, amigos!
Posted by Jocelyn Wong Neill at 9:58 PM