Whoops, life got the better of me since the last "weekly" update (week #17, ending April 26), which ironically was when I was finally starting to feel like a real triathlete. Suddenly it's the day after my half IM at Challenge Atlantic City and I've missed nine weeks of blog updates, many of those weeks not feeling like such a real triathlete!

Spoiler alert: I did pretty good yesterday considering my mediocre training and got on the AG podium despite the first drafting penalty in my 16 years of triathlon racing. I was happy to feel strong throughout most of the race but know there's more work to do if I ever want to get a PR! 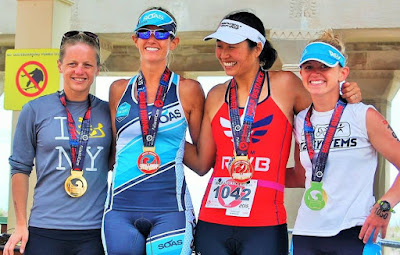 But before there's a race report, I'll do a little catch up while we wait for official photos, watermarks and all.

Week #18 (9:00 training). I went with some coworkers to the Challenged Athletes Foundation/Össur running and mobility clinic for amputees in DC, featuring Paralympic track superstar Scout who has gotten crazy fast since I met her a few years back! World record holder in the 400m and American record holder in the 200m! #madeinChina 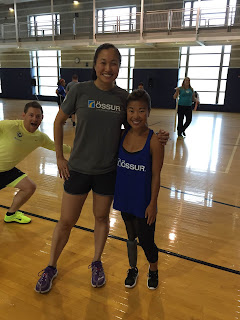 Week #19 (7:50 training). Towards the end of this week I sprained my foot running very steep hill repeats. So I didn't run for a couple weeks, but it was like my body knew that we were about to have some huge wedding-planning drama! :(

Week #20-21 (very negligible). A few days after the foot thing, we found out our original wedding venue was having some construction issues (with just over 4 months to go). AUGHHHH. Commence 2 weeks of very frantic wedding re-planning, venue hunting, phone calls and emails, family conferencing, BLEAH. We did in 2 weeks what we had been working on for the previous 12 months! And close to ZERO training for me (which didn't help with the stress).

When all was said and done, we found a great (and affordable!) new venue in a gorgeous location (Dewey Beach!) but had to push the date back by one week. There were some guest list casualties with the changes, but it is what it is. It's hard to please everybody when you are trying to plan such a big event on short notice. 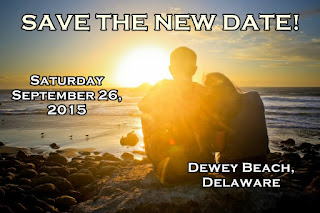 As I write this, we are less than 3 months to go but now more excited about the new venue than the old one! There still seems like so much to do, but I'm not racing in July so we should get more done. (My first dress fitting is tomorrow, 2 days after racing a half, YES! Calories burnt!) Training-wise, let's just pretend these two weeks didn't really exist. Blank pages in the ole training log can get torn out. :)

Week #22 (10:05 training). Of course that left me with a week to go for my season opener at Rock Hall International tri, which was not pretty, but a solid training day for me and fellow RWB Eagle Lindsay, who would also be racing Challenge AC. 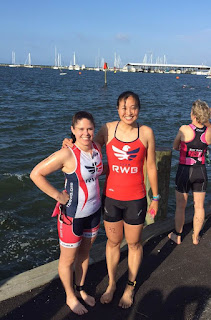 My time (2:38 and 5th AG) was almost 10 minutes slower than last year, mostly in the swim (non-wetsuit) and run (very low run fitness and pretty bad head space). I don't think my swim fitness was that terrible, but most of us went off course into the sun, skipping buoy #3, and I had enough of a conscience to turn back and make sure I went around the buoy. UGH. 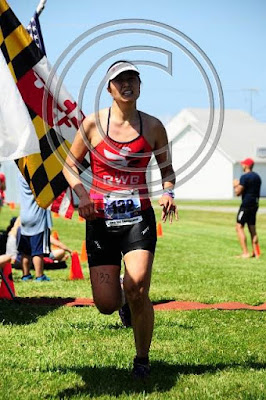 At least my transitions were faster, and my bike split was close (with no race wheels on Marty). I was too disgruntled to do a race report.

Week #23 (10:45 training). Post-race I only had 4 more weeks until the CAC half ironman and not quite freaking out yet, until I had the worst run EVER on Saturday morning. Then the panic set in hard and fast (3 weeks to go, ACK!!!). I decided at the last minute to do the course preview ride in NJ the next day, as I was seriously considering not starting the race. 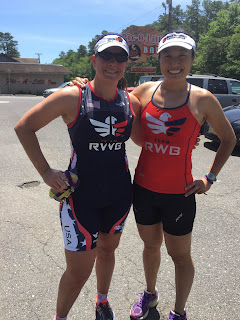 I'm really glad I did it, because I got to meet Jaime (fellow RWB chick who I've been FB friends with for a while) and we did a 60-mile bike/6-mile run brick together. It was motivating to be around other people training for the same race who were really excited about it. Also, I guess I train solo so much that I forget I am a pretty solid triathlete even when I think I'm super crappy.

Week #24 (12:15 training). My biggest week yet! Even with a mini trip to DC thrown in the middle of the week. During my bike leg at Rock Hall, I realized my quad/hamstring was complaining quite a bit when I biked super hard because I have unresolved issues from the bike crash/car crash at Ironman Korea from 2011. 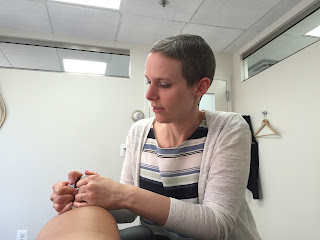 I visited the amazing Claire at Rose Physical Therapy to take advantage of our awesome partnership. She took advantage of me (heh heh!) with some dry needling and Graston-like manipulation to get all the nasty scar tissue straightened out. I will elaborate more in another post, but my quad/hamstring has been feeling much better and I got through the bike yesterday without the legs complaining! 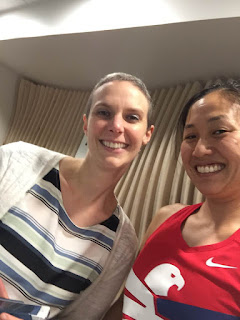 I also totally rigged it so I would make it to...Wednesday night run club in Bethesda! It's amazing how gigantic the group has gotten (big enough a panoramic shot is needed).

I then got a very solid weekend with my longest run (13.6 miles) and longest bike (65 miles) this year, both in 90* heat to cap off a 12-hour week. Now if I could only string together 10 weeks like this (or even 10 weeks of 10-hour weeks), I'd feel much better going into a half ironman!

Week #25 (9:00 training). More solid training capped off by our first Team RWB Mid-Atlantic Triathlon & Leadership Camp in Richmond! I'm the volunteer regional triathlon coordinator for the Mid-Atlantic and was on hand to help with the newbies as a "camp counselor". The Richmond contingent did an impressive amount of legwork to get this off the ground and I was proud to be part of it. 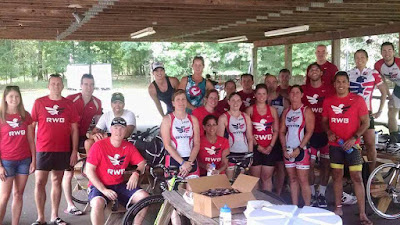 Week #26 (8:35 including the race). The usual race week shenanigans, eating more ice cream and having a beer every day while working out a little bit less. ;)

And getting Marty equipped with new stickers and stuff for... RACE TIME! 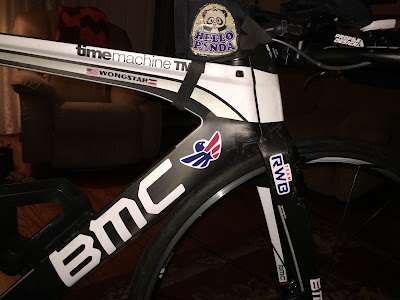 Wongstar decals from www.veloink.com and the other flag is my "dual citizenship" for Sufferlandria. #IWBMATTKT = "I will beat my ass today to kick yours tomorrow!" 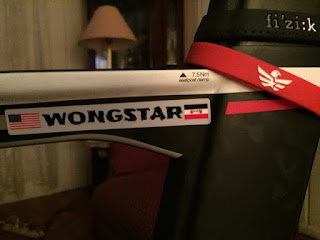