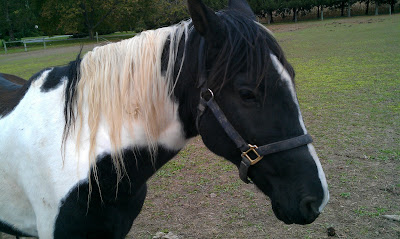 I borrowed Woody's cowboy hat...which threatened to fly off my head whenever Ace went too fast. (And yes, I totally yelled "Whoa, horsey!") Apparently foam hats do not stay on very well. And I wore the cowboy boots I bought when I was in Cozumel two years ago to race Ironman. I also learned the real purpose of spurs. I didn't wear spurs. 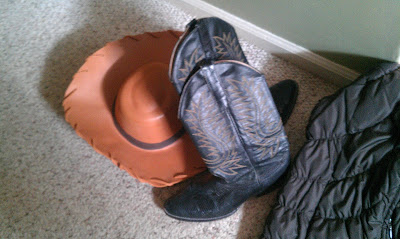 The "new & exciting" was in full force as I have NEVER ridden a horse before...unless you count that one time, at summer camp, when I sat on a horse for a few minutes while the horse handler person led us around the ring. (This was actually when I was 23 years old and volunteering as a counselor at a kids' camp.) 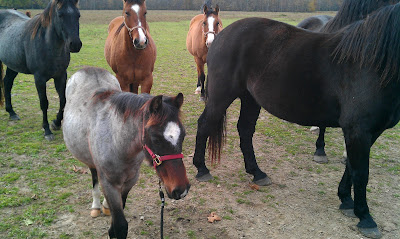 The cowboy in charge handed me a brush to brush out Ace before we saddled him up. I said "oh yes, I had a whole stable of My Little Ponies when I was a little girl, so I am very experienced in brushing horses." The only difference was that his eyeball was as big as my head, and ok...he wasn't blue or purple. 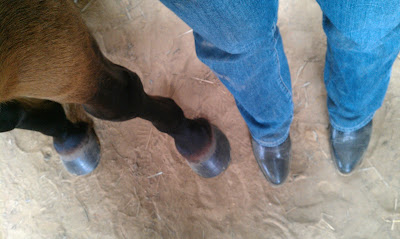 Someone else took pictures of me actually ON the horse, with my hat and cowboy boots on, I promise! but I'll have to acquire those and upload them later.
...

In other news, I realized I am suffering from a combination of "injury brain" (arguably different than brain injury) and "impending 30th birthday brain" (similar to quarter-life crisis). I was watching last week's episode of How I Met Your Mother and there was this sideplot on Lily and Marshall being given a house in the suburbs...but they determined Lily wasn't allowed to make any big decisions, because she was suffering from "pregnancy brain," which affects her judgement on EVERYTHING.

I've been trying to make some big decisions on the triathlon career recently, and have decided to chill out for now. The combination of being injured and turning 30 this month has me changing my mind every other week. The best advice I've gotten from people (you know who you are!) is to heal up first, and then figure it out.

In the meantime, doing new and exciting things is pretty fun. And exciting. On the horizon next for Operation T-NET is Atlantic City on Wednesday! Monopoly here we come!
Posted by Jocelyn Wong Neill at 8:27 PM