June, July, and August are officially over along with "The Summer of No Triathlon". I finagled my way out of my lease a month early and spent all day yesterday missing the entire big training day that Coach Beck had planned for me, to clean every last inch of the studio apartment until it was shinier than when I moved in 11 months ago. I was planning to do at least half the cleaning over the weekend, but sometimes you get a hurricane and tornado warning and have to hide in the basement. Plans change.

I felt like Cinderella. Scrubbing gives you a killer arm workout when you can't go swimming. 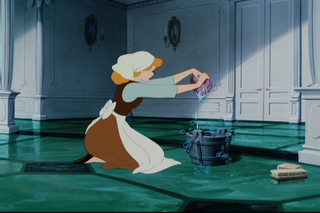 But the keys have been turned in and I can now focus once again on what's more important: getting back to that triathlete inside of me. The last weekend in August also signals the end of the Kona points calendar for pro triathletes. This is the first year they've switched over to a points system for professionals, so the 30 pro women who have accumulated the most points from their 5 best Ironman races from September 1, 2010 to August 31, 2011 qualify for the Ironman World Championships in Hawaii (mid-October).

Despite the weirdness of the year including cancelled races and a freak car crash, I was still more than slightly horrified when I checked out the final points standings which have just been posted up earlier this week.

ok, are you at the end of the women's list yet?

Jocelyn Wong, ranked 130 out of 130 pro women. There are 3 of us that are "tied" at the bottom with 200 points apiece, and of course they had to go in ABC order by last name, didn't they?

I quickly realized that I should most definitely have more than 200 points, the 200 measly points I acquired from that measly IM Texas race in May. Which makes it feel like even more of a punch in the gut. Not just to be ranked last, but to be ranked last inaccurately because 90th or 130th, does it really actually matter?

I raced a crap-ton last year; my 8th at IM Wisconsin gave me 480 pts and then another 640pts for taking 12th at IM Arizona. The races are also "weighted" in that more competitive races (or rather, the races that WTC wants to be more competitive) offer more points than others. So by my own calculations, I should actually have 1320 points, which puts me in 90th place.

But who really cares how accurate the points standings are for some nobody pro triathlete girl who isn't even in the top 50-60. For all we know, the other 2 women who seem to only have 200 points may have more too. 90th might as well be DFL.

Something about being ranked DFL in the KPR sparked a fire in me, despite the inaccuracy of the whole stupid thing. I want to qualify for Kona next year, godammit. I never even got to go as an age grouper because I never was fast enough to qualify. Then I got my pro card and never had any of those glory days as an "elite age grouper". I've now done enough Ironmans as a pro to have qualified at least 10x over as an amateur with the times I've done. But I've gotta qualify as a pro now. No going back.

I'm certainly not one of those self righteous pros who says "oh even though I get a slot, I'm not going to go until I know I am ready." Screw that. I get my slot = I'm going to Kona.

I think secretly I've always doubted myself as a pro. I never felt like I was really good enough to be on TeamTBB. I never felt like I was fast enough to approach companies for sponsorship. I've been full of so many excuses this past year. I'll wait til I get faster. I'll wait til I weigh X pounds. My fitness level this past year has been so inconsistent because my head's been all over the place.

I thought I had it all figured out, and things were finally starting to click when the crash in Korea happened. Then with starting the new job, getting used to working and training again, and then moving out of the apartment, and in with the sherpa. I keep waiting for things to quiet down, to settle down, to get used to everything.

Well, I'm tired of waiting. What am I waiting for? Project Kona 2012 starts NOW. WTC has yet to publish the the points distribution for the 2012 races, but in the meantime, the first points race for me will be IM Cozumel on November 27th. I've got 12 weeks to get ready.