So. I had been planning to do the ChesapeakeMan Ultra Triathlon (ironman distance) since back in April. It's only 2 hours away by car and the race directors were very excited about having a pro triathlete come do their race. They comped my entree fee and would be hooking me up with a wonderful homestay family. Then I decided to go back to work, landed a job, collided with a car during IM Korea, started the new job and took over a month off training due to the crash injuries. My summer racing schedule got thrown out the window and I was eager to get the DNF monkey off my back since it was an ambulance that took me off the race course in Korea.

Then with less than a month's notice, my boss volunteered me to go on the medical mission in El Salvador because the CPO who has gone in years past was expecting his second baby...so they had been scrambling for an orthotist with not much luck, and it's a pretty key role for the orthopedic team, as I would soon discover myself!

The only caveat...it was the week leading up to ChesapeakeMan. Could I do both? How could I refuse a trip to El Salvador and the opportunity to help out kids who couldn't afford it? Aren't you supposed to taper right before an ironman anyway? And so began the Double Header: a medical mission trip to a foreign country right before my first ironman race coming off getting hit by a car. This was honestly the hardest week I've ever experienced in my life, and if I knew what it really entailed, I'm not sure I'd choose to do both again. But somehow I lived to tell the tale... 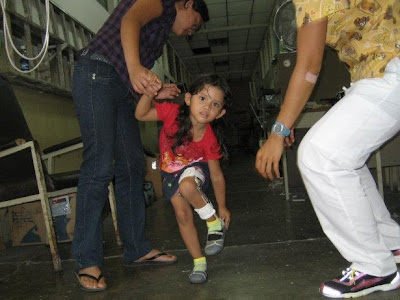 Saturday Sept 17th, I flew to El Salvador to volunteer with the Philly chapter of Healing The Children with 28 other volunteers (orthopedic surgeons & residents, podiatrists, nurses, anesthetists & scrub nurses). I was basically team leader for orthotics and helped retrofit leg braces for kids that weren't candidates for surgery.

The team has been going to El Salvador for 17 years or so but this was the first time we were right by the city center in the capital, San Salvador. The sheer volume of kids I saw for orthotics was much more than any year before and I ended up working an average of 12 hours every day the first four days...and over 16 hours on the last day (Thursday). 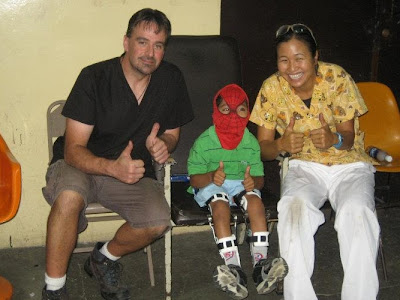 It seemed like the number of kids and families that kept coming by would never end--very rewarding work but also extremely draining: physically, mentally and emotionally. It was hard to take time off for lunch breaks or even bathroom breaks when you had a whole room of families that had been waiting for you since early in the morning. Most days we wouldn't eat lunch until 2 or 3pm, and that was when the local Rotary Club (who took care of us and provided lunch for us each day) practically forced us to stop working so we wouldn't pass out. 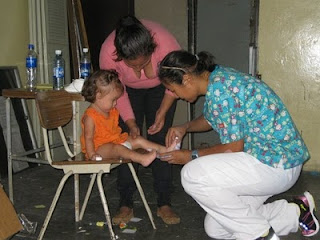 Three of those 5 days, I woke up at 4:30am and did 1.5hrs of training in the hotel gym (with a 30min swim in the 15m pool...once) before getting on the team shuttle to the hospital. The last day I was too exhausted to get up early and train, but we also wanted a head start that last day--we worked from 6:30am until 11pm. "Hombre Araña" (Spiderman boy above) needed bilateral KAFO's (full leg braces on both sides) which is a huge project. Even making just one of them back in the USA, with a full lab at your disposal, is considered a "rush job" if you want it done in one week. We had very limited supplies and materials, and had to make four KAFO's in addition to a variety of devices for over 60-70 patients.

Early on, the motto of the trip became "Do the best you can with what you have." ...Foreshadowingly, this would also be my motto for getting ChesapeakeMan done in the condition I was in!

There was a lot of standing involved while we worked (when not kneeling down to fit the little bambinos), and Derek's legs were swelling up starting on Day 2. I only slept maybe 5 hours a night, 4 hours Thursday night, then flew back home Friday night, had an hour to pack for ChesapeakeMan then drove the 2 hours to Cambridge, MD, and slept 3 hours the night before the race (Saturday). 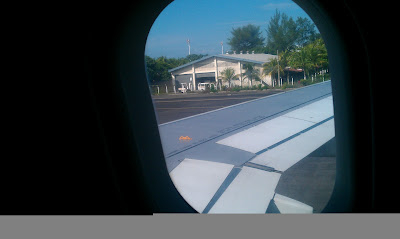 Not exactly what you'd call the ideal preparation the week before an ironman-distance race.

Part 2 coming up next! To be continued...
Posted by Jocelyn Wong Neill at 2:45 AM