I'm at the airport. I just checked in two bags, and sweated over if they were both under 50lbs, was relieved when I didn't get charged for the luggage, and am off to a foreign country for an entire week! 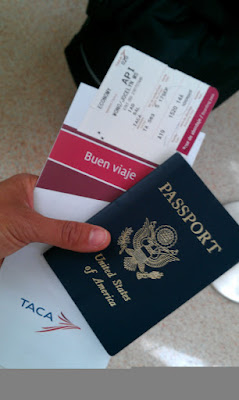 Last night I stayed up late packing...only this time, it ain't for no triathlon. This is something completely different altogether... I packed a heat gun, razor blades, tons of fiberglass casting tape, hammer and rivets, drills and drill bits, all kinds of other tools. I had to look up what TSA's stand was on flammable liquids and realized I better leave the propane tank with the torch and the flammable glue spray at home. The hacksaw was also left behind at the last minute. It was kind of huge. 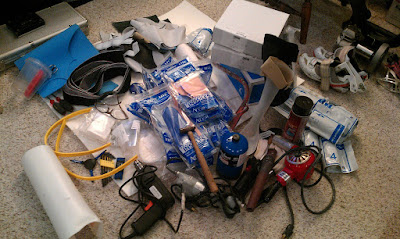 Whoa now, what is all this?! I'm heading to El Salvador for a medical mission with various orthopedic and podiatric doctors as a team member for Healing the Children, the Greater Philly Chapter. I'll get to take care of the kids who aren't candidates for surgery or help fit them to braces as soon as they are out of surgery for post-op stabilization.

My boss at Independence P&O volunteered me to go! So here I go! I am actually flying out of Washington DC, Dulles airport, since it's a direct flight to San Salvador. Which meant an Amtrak ride from Wilmington to Union Station in DC, then a SuperShuttle to Dulles. It's like my own Amazing Race adventure.

My shenanigans as of late have been MIA with my own challenges of learning how to juggle training and a full-time job again, but the secret seems to be waking up at 5:30am every morning. I did it 5 mornings in a row! So proud of myself :) Now how to juggle training, working, and blogging? That's the next challenge. It helps that I just got myself a new HTC Inspire 4G smartphone. I love it because it's called "inspire," and when you say "4G" it sounds like..."orgy." And it's awesome and fast! The last phone I got that I THOUGHT was a smartphone was actually really dumb, and died on me. Now I actually have a Delaware phone number. I guess it's official then! 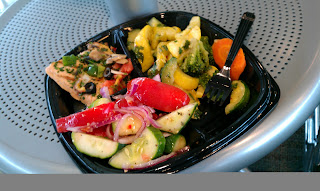 Here is my first travel meal for the trip, at the airport. I'm partaking in Mark Sisson's 30-Day Primal Blueprint Challenge, which started on Monday. I've actually been eating Paleo-ish/Primal-ish since college, and in various iterations throughout training camps. It's basically a whole foods type of diet, nothing processed, so grain-free and dairy-free. I had fallen off the wagon the last couple months with the stress of being injured, starting my first big girl job and then moving in with the sherpa. (Sherpa eats like crap.) So this 30-day challenge will help me get back on track. It's tricky enough being in an airport, but a foreign country...just makes it all the more challenging! The above meal is actually grilled salmon with sauteed zucchini/broccoli and a cucumber/tomato salad...from a pizza and pasta restaurant. The key is to not be afraid to ask for what you really want.

Whenever I did medical missions in Thailand and the Philippines, I usually gained weight at the end of the week, from lack of training and being pushed a bunch of food all the time. Local Rotary clubs usually sponsor these missions and they make sure you are well fed! So the training & nutrition goal this coming week is to NOT GET FAT. ;)

Anyway, I'll make sure to take lots of photos and try to get the blog updated during the week!
Posted by Jocelyn Wong Neill at 3:18 PM