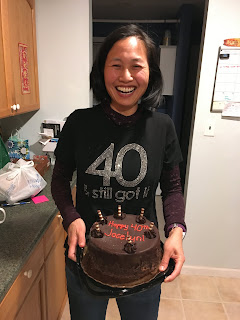 I turned 40 last week, on Thanksgiving. There was much to be grateful for, and I realized it was time for some new big scary goals. That way…I won’t feel like I “peaked” at 40!
I used to make huge lists, kind of with deadlines, like my “30 before 30”, “19 for 2019” and then “19 during COVID-19” (which you know, is still ongoing…so the list is not done, bwahaha). But I’ve realized the danger of setting these arbitrary deadlines. When I was approaching my 30th birthday, a DECADE AGO… I was an injured professional triathlete. I had only competed for less than 3 seasons (half of 2009, all of 2010 and half of 2011) but started panicking like “what am I doing with my life?!” I had so much student loan debt and I wasn’t in the most supportive relationship at the time. My plan had been to return to work in prosthetics & orthotics part-time while continuing to race, but getting hit by a car during Ironman Korea really put a damper on things. As that milestone 30th birthday loomed, I made the "grown up" decision to retire from professional triathlon, and to focus on my prosthetics & orthotics career. My decision to retire early from pro triathlon would haunt me for years afterwards. I’m at peace with it now, but I do look back at how young I was and believe that I could’ve made it happen under different circumstances.
By 30 years old, I had hit some major goals of becoming the first Asian-American female professional triathlete, traveled the world training and racing as such, specialized in the freakin’ IRONMAN distance, and broke 10 hours a couple times—all triathlon things I had only ever dreamt of.
As of February 2020, I had paid off all my student loans that had sat stagnant during my pro triathlon career, that I later focused on eliminating when I was able to transition to a “real job” as my mom called it. It was over $95,000…a really daunting and seemingly impossible amount to tackle. But it got done!
And nearly 12 months ago, my primary “before 40” goal (the only one with a real biological deadline)—we had our baby Ainsley! There was admittedly procrastination on both Mom and Dad’s side. I gave myself a lot of grace during pregnancy and postpartum to not be one of those moms who did TOO MUCH. I have a great pelvic floor physical therapist who gave the best advice…”just because you CAN…doesn’t mean you SHOULD.” 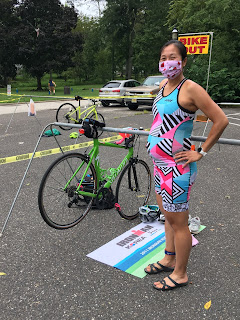 I did a super sprint triathlon at 23 weeks pregnant to commemorate my 20th year in the sport, but couldn’t run much or bike outside shortly afterwards. I tried to then swim more, but eventually got super tired and just waddled around the block with our dog Aero. I got really huge because our baby was pretty huge. She wanted to be 12lbs but the 36-week ultrasound (when she was already over 9lbs) necessitated a scheduled Cesarean…so she was evicted 3 days early at a mere 11lbs 6oz. (The birth story will perhaps needs its own entire blog post...)
Postpartum, I’ve only run up to 5-6 miles at the most, and did a handful of sprint triathlons over the summer. We’ve done a couple stroller 5k’s. My body is starting to feel normal…ish…maybe. The 65lbs I gained during pregnancy eventually came off (and then some, actually). Apparently breastfeeding a very large baby burns like 1000 calories a day, because my training is fairly nonexistent other than daily stroller walks, heavy baby lifting and the occasional 5k (both with and without the fancy BOB stroller).
Actually, I’m sure my body will never quite be the same. My feet went up a half size, from 10 to 10.5 (the most annoying size because a lot of brands skip 10.5 and jump to 11…which is usually the biggest size in women’s carried in stores). I might weigh less but it’s all distributed differently. 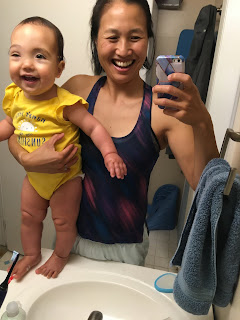 And time management—where do I even try to fit in training as a new mom, who works full-time, with a baby and a dog? Parents with more than 1 child really impress me! I’m hoping to get back into some sort of blogging, as I would love to tackle some big athletic goals again, now that I’ve essentially made it to 12 months postpartum, and hit my milestone 40th birthday. Stay tuned!!
In the meantime, here are some highlights from our first year: 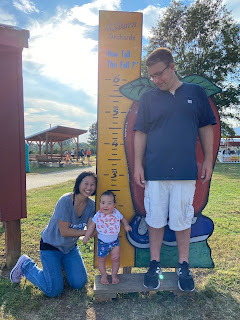 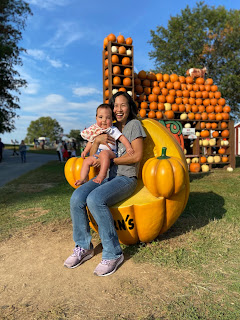 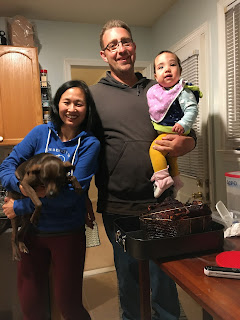 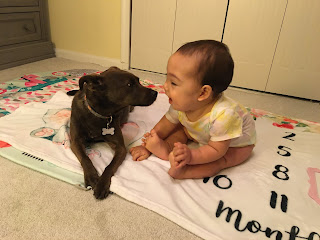 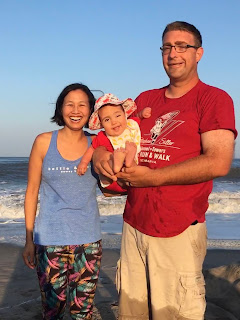