Oh, hello! I was MIA for a while. I still need to update some of the nitty gritty details of this blogsite (outdated sponsors, employer, etc here and there) but I've been meaning to blog more. Really. I have a new roommate now (Kevin) and we have been spending quality time together prioritizing this new transition in life. So blogging and training went by the wayside, and I really had no desire to do anything tri-related for the first few months of the new job. But the good news is, I put White Tiger back together on Friday and rode outside for the first time in 7 months. I might even swim this week!

As I'm cleaning and reorganizing our studio apartment (600 sq ft shared with a 6'9" boyfriend), assembling our new IKEA furniture and such, I came across a couple of old notebooks during my O&P residencies that I had from when I first got recruited onto teamTBB and prior to going to any training camps. Dated May 16, 2007 and June 21, 2008.

It's kind of creepy, actually. I gave myself deadlines of "making it" according to my own standards by my 30th birthday--November 25, 2011. This was my 30th birthday blog post, and I sort of officially announced my retirement from pro triathlon a couple weeks later, on December 7th.

So it's eerie to see handwritten notebook entries where I had written things like "If I am nowhere near my goals as an athlete by the time I turn 30, I will return to O&P full time" and a list of "How to know that I have 'MADE IT' as a pro triathlete...according to my own standards by the time I turn 30".

What's crazy is that I achieved most of these goals, and during the process, kept raising the bar and then extending my deadline. After my successful rookie season in 2009, I really thought I'd still be racing as a pro triathlete until my 35th birthday, and then would re-evaluate then (I'm 31 now). I'd almost forgotten about my original 30th birthday deadline until just now...so what's on the 2008 list, and how did I do? 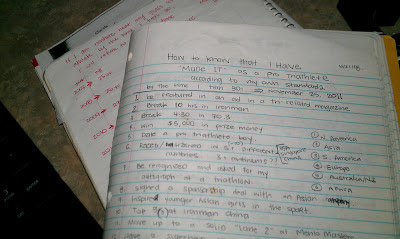 1. Be featured on an ad in a tri-related magazine.


4. Win $5,000 in prize money.
5. Date a pro triathlete boy.
6. Raced/trained in 5+ different countries. and 3+ continents??
7. Be recognized and asked for my autograph at a triathlon.
8. Sign a sponsorship deal with an Asian company.
9. Inspire younger Asian girls in the sport.
10. Top 5 at Ironman China.
11. Move up to a solid "Lane 2" at Menlo Masters.
12. Have a superhero six-pack - i.e. figure out the eating/weight thing.
13. Work at prosthetic clinics in Philippines, Cambodia, & Vietnam.
14. Credit card debt in control, student loan payments being met by the time I turn 35.
15. Easily break 90min for half marathon.

Conclusion? Amazingly, I accomplished a lot of what my 25yo and 26yo self put down on paper. What I didn't account for is that success is a moving target, as it should be. Do I still wish I was racing pro? Not really, but I do miss being fit and traveling to fun places. Being famous was fun too. But hey...I can still be fit, travel to fun places, and be famous in my own right...or at least, be important to those who are important to me. If anything, I'm re-inspired by the girl I used to be, the one who dared to dream big dreams.
Posted by Jocelyn Wong Neill at 8:07 PM