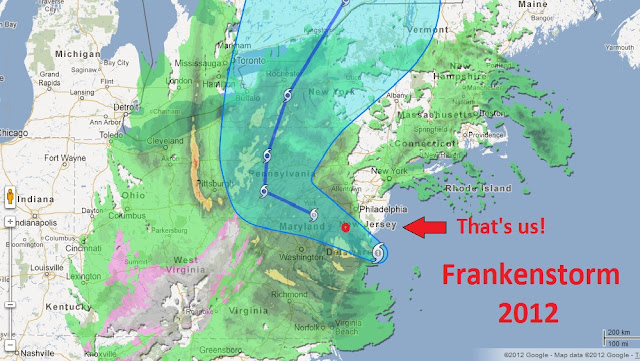 Here we are, the Frankenstorm is approaching and we are stuck at home with an unexpected four-day weekend. Work was cancelled last night for today, and then for tomorrow, while the Governor imposed driving restrictions as of 5am this morning. You can follow the Google Maps crisis storm tracker map to see what's going on. I added the red dot in between the two gray swirly dots so you can see where we are. We had Hurricane Irene come through in late August of last year (the same time as a tornado and right after that freak East Coast earthquake), but it was on the weekend and fizzled into a lame tropical storm by the time it hit us.

This time it's supposed to remain a Category 1 hurricane and the path of it goes right through Wilmington, DE over the course of two days. Never fear, me and the Sherpa and Socks are not in a flood zone and the biggest fear is that Socks will not want to go outside to do her #1's and #2's. Since we are also under house arrest and hunkering down, we also made sure to stock up on the proper food supplies as stores will be closed: 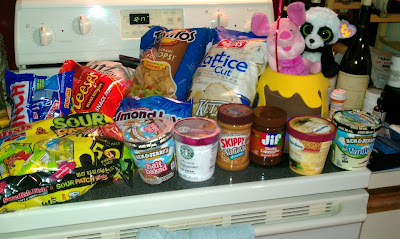 Chips and Halloween candy and ice cream and peanut butter. State of emergencies are not the time to be healthy, my dears. The fattier the food, the less hungry you'll be! FACT. (There is also a photo on Sherpa's phone after the trip to the liquor store, of course.) You may be asking why we got so much ice cream when the power might go out, compromising the fridge and freezer. I shall answer that question with another question: why do people stock up on milk right before a hurricane? In all seriousness, should the freezer go out, I will be yelling "QUICK, eat the ice cream before it goes bad!!!" 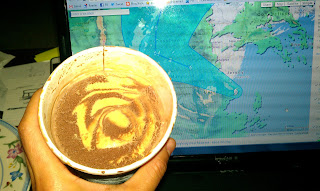 Because it is never a bad occasion to have ice cream, and if you are going to have a natural disaster strike your home, you should have a happy tummy. I decided to get a head start in the event of the freezer going out, and was pleasantly surprised to find a hurricane swirl in my Mocha Frappuccino Starbucks ice cream pint.

Speaking of being a great fat kid, I decided to be a tubby little cubby for Halloween. As I mentioned in my previous post, I've been too busy to make something all that complicated, so I thought, wow, how easy would it be to dress as a character that only wears a red polo shirt and no pants? 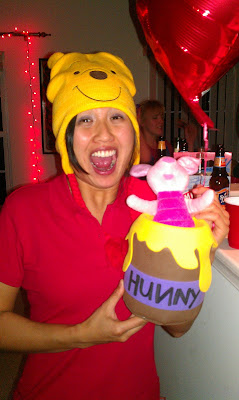 I tried to get the Sherpa to dress up as my Christopher Robin... 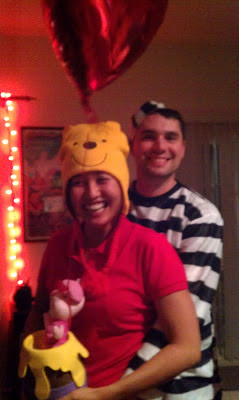 So instead, I told people that he was Christopher Robin who was arrested and in jail, and that I was an anorexic Winnie the Pooh. (Everyone said I was too skinny to be Pooh, and I thought about stuffing a pillow in there, but then people would think I got knocked up.) 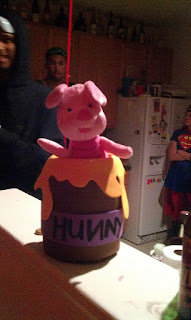 Even without the Pooh hat (when it got warmer inside), I was plenty recognizable with my pot of "HUNNY" and little Piglet. And of course a balloon! The real question of course, is did I wear any pants? The answer would be "Oh bother, you had to be there." Meanwhile, it was much more fun dressing up our little puppy, who turned one year old last week: 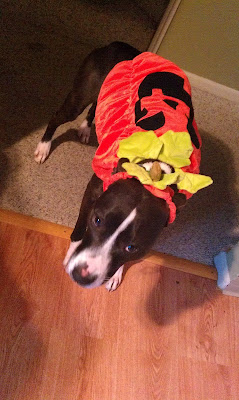 Puppy was not as excited and delighted about her costumes as we were! This next one was extra hilarious: 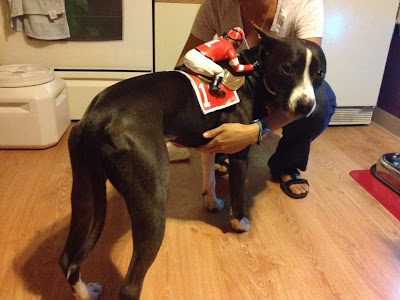 She is Seabiscuit the champion race dog. The jockey on her back is made out of rubber, and when she is sprinting after her tennis ball while wearing it, the jockey bounces up and down. It's SO AWESOME!!!

So...that's the Frankenstorm update. Everyone else around here, please be safe. Our power is still on, for now. And we have plenty of flashlights and candles, and ice cream and wine!
Posted by Jocelyn Wong Neill at 7:43 PM