I'm letting my training volume creep up slowly, which I think is a smart way to get back into it without getting injured. The first couple months were pretty low volume (i.e. low pressure), where I just tried to string in as many 10-hour weeks as I could (I've always measured my training volume by hours since my teenage triathlete days, courtesy of Joe Friel and the original Triathlete's Training Bible). There were six's, eight's, a few tens.

Then June hit, which is a very ridiculous travel month for me. After all the pro triathloning, I wanted to make up for time not spent with family and important events. Unfortunately a lot of these important events happen in the span of this month. 2 weekends ago was spent in Las Vegas for the Sherpa's sister's wedding, last weekend was a nice reprieve at home, this morning I head off to Alaska for my sister's (the WongSiSTAR) first marathon I've been quasi-coaching her for, and home in DE for 4 days and then the weekend after home to San Francisco for my cousin's wedding, then a red-eye back to arrive home (Delaware) on 4th of July. (I still get confused which place to call home, bear with me.)

Then PHEW, no more travel, and I can start ramping up the training again.

I figured I could use the trips to help me improve or motivate my triathlon-ness in different ways.

In Vegas, I made sure to meet the sharks and jellies and gigantic sting rays and sea turtles (over at the Shark Reef Aquarium at Mandalay Bay) to scare me into wanting to swim faster in open water. 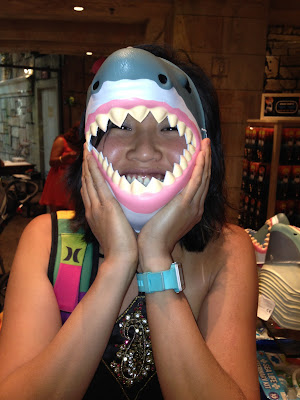 In Alaska, I originally was going to try to ramp up my running to do the full with the sister, but my shins told me early on what a dumb idea that was. Then I planned to run the half-marathon, which I haven't done in many years, but as I only started running 2 months ago and have done nothing for speed or intensity, I really don't feel like spending $85 to run a slow half marathon. I've done a couple 2-hr runs in training and will probably just meet the sister at the half-way point and be her unofficial pacer for the second half. My top priority is to be there as her sherpa, and we can't both be wiped out from the marathon. Someone's gotta fetch the milkshakes and french fries!

In San Francisco, mentally and emotionally it will be great to reunite with my family and some of my best friends. They keep me grounded and remind me of where I came from, and love me no matter how I do (or what I do) in the sporting world. I called my Pop for Father's Day and I can tell he wants me to get back to triathlon racing in some sort of shape or form. He doesn't want me to waste all those years I spent training! Always my biggest fan. Thanks Dad!

Last week I finally trained for more than 10-ish hrs, bwahaha. I went an entire 13hrs. This finally puts me in the teens. I hope to get up to the mid-teens over the next few weeks, despite (or after) the travel craziness, and then up to the higher teens. I really like being in a triathlon training routine again. I anticipate this coming week to be lower volume, what with traveling to Alaska (it's effing far from here), probably being without a pool or bike, and Alaskan shenanigans with the sister. Oh, and that half marathon. I'll think of it as a taper week!

As a full-time pro I was going 25-35hrs/week, which is too much to handle with working full-time and puppy-rearing (and Sherpa training, heh heh) now. Unless I don't sleep. But then I'd be bad at my job, and bad at being a triathlete "for fun". So I'm scouting a more realistic work/triathlon balance. When I was checking my old training logs and programs for what I did when working full-time during residency, it was 18-21 hrs. Then there was a point when I was working part-time at 25hrs a week post-residency, and Brett put me on 31-hour training weeks. WHEW! Both times I was living at home and didn't have to worry about stuff like cooking and buying groceries or having a social life or paying rent. (Just having to deal with the guilt associated with that.)

When I hit 18hrs again, it will be exciting. But maybe I won't. We'll see if it's achievable and sustainable. Just trying to find the best balance in all of this work and training stuff, and still keep it fun and happy.

Posted by Jocelyn Wong Neill at 7:00 AM