Summer 2019, part I: Festival of 5k’s and a pesky plantar fascia

Hello, August! Apparently I have been aggressively ignoring my 19 for ‘19 list, as I missed a blog update for June and July (and let’s face it, my May post was really about my April marathon...). Maybe I’ll double up (or double down?) the next few months to play catch-up! ;)

It’s been a funky summer. I went on a 5k spree in May for funsies, using my hard-earned winter marathon fitness and some unstructured training to hit up the local 5k scene.

First, there was the Star Wars-themed “May the Fourth” 5k. It was only a week after the marathon. 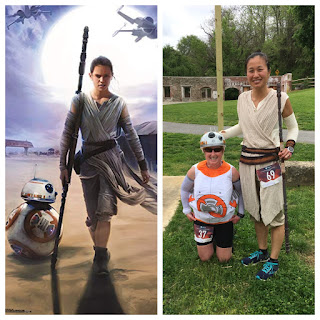 I was the fastest Rey (there was 4 of us) and was so close to taking the overall win but that costume got HOT! Poor BB8 turned into a little red tomato. I ended up as 2nd female and 2nd overall (yep the top 2 women beat all the men). 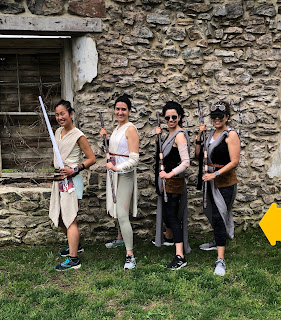 The two Chewbacca's were smart to stay home. If it was too hot for Rey and BB8, you know that Chewbacca would've had fatal heat stroke. 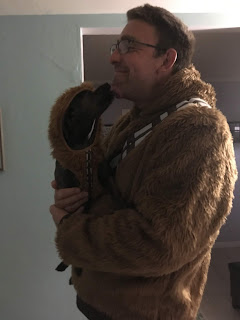 I then decided to take on a small grassroots summer series at the Dew Point Brewery (same race director, David Berger of Progressive Fitness Coaching), held on the “teenage” Thursday of each month, May through August. I didn’t realize how crazy hilly it was—the course is the same as their “Abdominable Quadzilla” winter series. But being a Quadzilla myself who grew up in the SF Bay Area, I loved it. Most races these days have courses and conditions that are purposely TOO easy-peasy. I took the top spot for women while chasing the first guy up and down all the big hills. Great Type 2 fun, with a free craft beer at the finish! 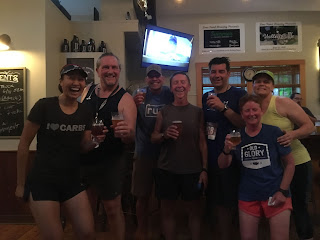 My 3rd May 5k was the Fallen Heroes 5k, a Memorial weekend race that our local Team RWB chapter has supported since 2015. I was excited to take the women’s win for the first time (I have finished 2nd or 3rd many times) and surprised to win $50 in cash! Kevin ended up matching the $50 and we donated the $100 back to the organizer, as it benefited the Elizabeth Loncki educational fund—the race honors the first woman from Delaware that was KIA in Afghanistan. I don’t race for prize money any more so it didn’t feel right to keep the money when the race was meant to raise $$$ for this scholarship fund! 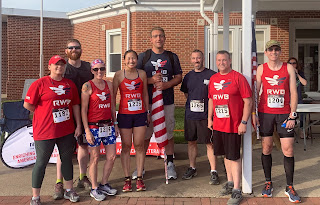 Unfortunately by this third 5k, my left foot had been acting funny...a weird soreness that kind of felt like plantar fasciitis but on the side of my foot too. I was feeling really fit and close to PR shape that last 5k, and ended up holding back a little bit due to the sore foot. :( Welp, apparently running evening 5k’s after work without much warm-up was not helpful and I would later find out via an X-ray and MRI later that...at least I didn’t have a stress fracture! The official diagnosis was partial tear of the plantar fascia, actually "plantar fasciitis and partial tearing involving the central and lateral cord region", so WHOMP WHOMP to all that great fitness I was building up. :( 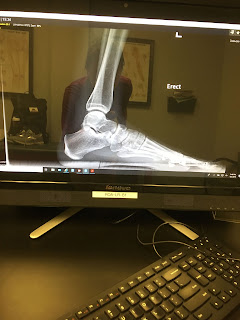 I didn’t have a solid summer or fall race goal (maybe work on more speed with 10k’s and 10-milers and perhaps a half marathon? Maybe a fall marathon? Maybe a summer sprint triathlon?) so I spent a couple weeks resting and restless. Since the outdoor pools all open after Memorial Day, I was trying to “cross train” a couple times a week with a swim and a fun group ride, and then keep my runs under 5 miles, never on consecutive days. 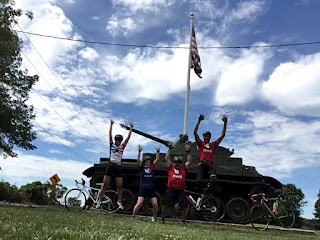 I have been working with a nutrition coach, Janelle, since before my marathon in April (more in another post later) and she encouraged me to actually bike and swim more than once a week, so that I could keep my activity level up instead of going mental. Of course, I came to the realization that “cross training” for a born-again runner was really just called “TRAINING” in my previous life as a triathlete...and there was no better way to motivate myself back into triathlon training than to sign up for a little race! 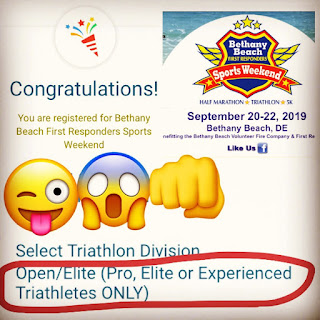 Ta-da! I have always wanted to sign up for a small local race and train for it like it’s my very own Olympics. I saw there was an elite/open wave at the Bethany Beach triathlon for “experienced triathletes only”, and figured, why not. I don’t have a pro license any more, but it’s not fair to beat up on age groupers when there is a separate division for faster folks. So it did the trick to get me back into triathlon training after a 2-year hiatus. It's a "sprinternational" distance: 1000-meter swim, 30k bike (about 18.5 miles), and 7.5k run (about 4.5 miles).

So how would I fare as a #retiredtriathlete? Stay tuned for part 2 of my summer recap!

P.S. I convinced my BB8 to do her very first triathlon at Bethany Beach too! 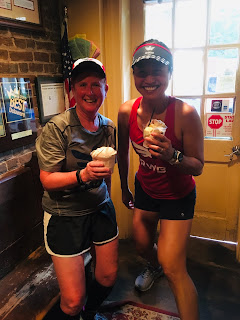 Posted by Jocelyn Wong Neill at 7:53 AM